Rachel Dolezal needs to "identify" with being a fraud 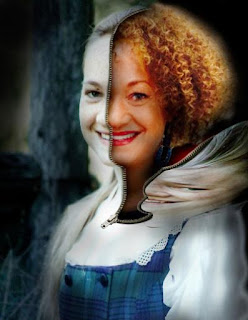 So I am watching this Rachel Dolezal zoo and as much as I don't want to give her any more press, I thought: "OK, here is 10 minutes where you get to explain yourself. Go." Matt Lauer interviewed her on Today and I figured I would do my best to watch it with an open mind.

But before two seconds goes by I already can't stand her. From the get go when Lauer says "All the headlines" and she shakes here head with an audible sigh as if to say: "I know! What's up with that?" I want to grab her by her fake nappy hair and say "YOU CAUSED IT ALL."  Then I regroup and try to listen again. (By the way, has any woman ever been accused of faking her fake hair before?)

Lauer asks her in many different ways talking about the lid be blown off and if she is white and Dolezal says she needs to discuss the "complexity of her identity." Rachel, sweetheart, your parents are both white. Unless, they are not your parents (entirely possible and there is some WEIRD story that is going to leak) then there is no complexity. I do not care what you "identify" as. I identified as a superhero growing up. I don't get to BE a superhero. I am not freaking Nightcrawler because we are both German! I calm myself again. Wait. Am I seriously only 42 seconds into this?!

Next there is a segment about what her parents say which is quite complimentary. "She is a very talented woman. Doing work she believes in. Why can't she do that as a Caucasian Woman, which is what she is."  Dolezal then goes on to say: "I don't see why they are in such a rush to whitewash (seriously, she said "whitewash) some of the work I have done and who I am." They aren't in a rush. I am guessing they have been trying to do this for 32 years (your age minus the age 5 when you started using brown crayons to color pictures of yourself which I think is all this court needs to determine you are black. Case closed.)

When asked why she identified a black man as her dad she says "Every man can be a father, not every man can be a dad." Meanwhile she has this shit-eating smirk on her that good god almighty I want to knock right off.

It is here I realize something. The other day I compared Dolezal to Donald Trump in a tweet. I was partially joking but now I realize I was right. She is 100% delusional. No matter what happens, no matter what facts are put in front of her, she will always have an explanation or a reason. On the Daily Show the other day, Jon Stewart mentioned that they finally got Donald Rumsfeld.  He then realizes that is is not only hollow but fruitless as people like him will just always swivel into another answer. This is exactly like this situation. Anyone who can says they "identify" with something and think it is a synonym for "being" is never going to change their mind. Or maybe she is not delusional. Maybe she is just supremely manipulative. You know, making the words mean whatever she wants whenever them to mean what she wants them to mean. Bill Clinton asking what the definition of "is" is, comes to mind. Masters of deception. Slight of tongue, if you will. They might get caught from time to time but rarely.  If they do, more people are willing to take them back into the fold then shun them.

Far more qualified people than me (who get actually paid to express their viewpoints, by the way) can tell you how this ongoing action by Dolezal is mind-numbingly in bad taste at best, shocking horrible at worst. I can simply say I know most of what I need to know about Rachel Dolezal comes from a couple of things.
1. She sued her college, Howard, a historically black university, over discrimination because she was white.
2. Even given the benefit of hindsight, she says her life has been one of "survival" and for the most part, she wouldn't change the things she has done. She reminds me also of Cheryl Strayed, who I gladly skewered in a blog post about her fictional tome "Wild".

What irks me most about this is the plethora of people doing good and doing things the right way who do not get the attention they deserve. This seems like an awful time to plug my book with Lacie Whyte called Running With the Girls but the exact purpose of that book was to show people doing just that. Rising up, surviving, and making the right decisions. Not getting caught, pretending you did nothing wrong, and then acting like somehow we are all the bad ones because you continuously lie, use subterfuge, or don't answer the questions.

It boils down to this: for whatever reason, Rachel Dolezal is a fraud. She tried to milk a system whichever way she felt it would best serve her purposes and maybe 20 years ago before social media etc, she would have skated by. But she didn't. She got caught.

Try as you might, she can't whitewash that.
Posted by Dane at 6:29 PM