Three years into living in the greater DC area and I was thinking about moving. I came thiiiis close to signing a deal with a foreign shoe company that would have changed my life. (To this day that deal is why I believe virtually no one when they say they will do something until it is actually 100% accomplished.)  Three years into living in Salt Lake City and I while I had less of a desire to move from there than I did in DC, I still had some itchy feet.

Three years of living in Portland? Well, I almost bought the place I am living in now just the other day. Well, almost isn't correct. But as almost as I have ever come to thinking about buying a place. Point being, who knows what will come up in the time being but right now I am more than content to live in the City of Roses.

1096 days of living in a place can give you some perspective and knowledge of the area. You also realize how little you know of it, especially when you spend about a week of every month away from it. I still haven't eaten a Voodoo Doughnut. Haven't, and won't, drink a craft beer of any kind. In spite of the plethora of opportunities, haven't even made it into one of our many fine strip clubs (even the vegan one!) Even when it comes to running, when people insist it must be a great running town (it's fair; but I guess it matters what you think makes a city a great place to run) it took me until just last month to finally run from Forest Park end to end.  I assumed I would have done that my first month here back in 2012.

When I moved in, I didn't really know what to expect of this town.  My arm and shoulder were still healing from a bike crash. I was barely two months removed from running the entire coast of Oregon. I assumed I would make constant trips to visit the ocean. In three years I have probably been there five times total. I also have realized that living on West Coast time is really odd. Sporting events start in the afternoon. NFL games start at 10 am. Many of my friends are getting up to go to work when I, the night owl, am still working away.

I have learned how extraordinarily diverse the state of Oregon is. I have been trying to explore as much of it as I can when I am home. It has now gotten to the point that most of the places I have not been to are at least a 3-4 hour drive away. That's a commitment to exploring when you know 6 hours of driving is needed to get to and from just to see something new.

My running has had some ups and downs, mostly downs.  However, it seems to be on the upswing. I have run some routes so many times and named them that my friends and fans on social media often know the routes and when I run them. That is a tad frightening when you think about it but flattering as well. 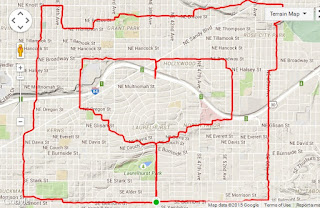 That said, I wanted to celebrate this 3rd year Portland-aversary with a special run. I had mapped out what I knew would be a little bit of a headache-to-run route a while back. I wasn't sure when or if I would ever run it.  But last night I decided today was the day.  So I loaded up my Camelbak Marathoner pack (it was a warm day today in Portland and I needed some water), started my Timex One GPS+ and off I went.

Most of my runs when I am home have the purpose of being workouts, not exploring or sightseeing.  Today, however was about taking it all in. Learning some new areas, realizing the route actually went over parts I had run over just once or twice previously in the past 3 years and some that I run about 2-3 a week. It was a nice mish-mash.

All told, however, I think the route symbolizes what I think of the Beaver State: I sure do love it.