My father passed away three years ago in January. On Father's Day I have well-meaning friends say they know today must be hard for me. However, if not for the fact that it is made very much in my face that today is Father's Day, I don't think about him that much more than I do normally. 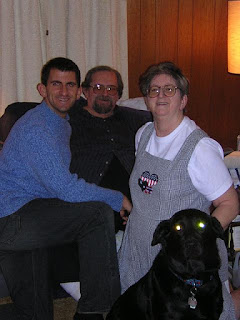 My father was not a perfect man. I wish he had been a better father.  By the same token, I am not a perfect man and I know I could be a better son (brother, relative, friend, marathon runner, writer, etc.) I also know that I am happy that he is no longer on this planet in the form he was in when I last knew him. Crippled by a hunting accident before I was born, my father spent his entire life that I knew him in constant pain. Becoming obese by a combination of his accident and his own personal choices, he was far from happy when it comes to his physical state. Near the end of his life, Alzhemier's robbed him of his mind.Whereas I can go for a run when crap is weighing on me, and lose my thoughts and mind for a bit to escape, he had no such physical escape. With his mind gone, there was nothing left of him.

Before Alzheimer's set in the hardest way, his memory began slightly receding. He hated it. With a passion. It made him so angry when he couldn't remember the slightest detail. I can only imagine that he saw that with his mind on its way out that his body would soon follow. He had long since outlived his expiration date given to him by doctors following his accident.  My family had repeatedly said the only way he was still alive was because he was too stubborn to die.  Akin to a quote about Teddy Roosevelt dying in his sleep, it is a good thing Death came for my father when he was not himself because Death would have lost an eye in the battle.

Dads are marginalized. They are made the butt of virtually all sitcoms and commercials. Poor befuddled men don't know how to run a dishwasher or make sure the diaper is on correctly! I saw a Coke advertisement for those personalized cans. Mom was large and in charge. Grad was next. Then, in a smaller freaking can, was Dad. Mothers are told they have the most difficult job on the planet. My thoughts on that are summed up best by comedian Bill Burr (hilarious link that has some foul language in it here.) Fortunately, things are turning around for the dad set. (And believe me, I love my Mom, too.) 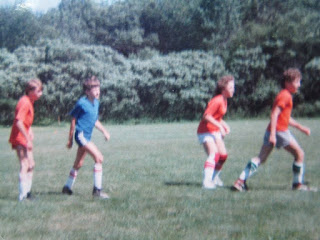 Do I have a point? Actually, I don't know. I am in Canada for the day to watch the Women's World Cup. I went for a run on the very cool Bog Forest Trail. I was alone with my thoughts and they turned to the game I was going to be watching. I played soccer for more than few years growing up. While my father was more of a fan of baseball, and made every single game I played, he would watch many of the soccer games as well.

For three years I played soccer and football at the same time. I had a forgiving soccer coach who allow me to show up late to practice because there was no way in hell that the football coach in small, Northwestern Titusville, PA would let me get out a little early to go kick a ball around. After football practice ended, I would jump in the back of my Dad's beat up truck, and in the drive all the way across town (I am pretty sure it is one mile; wait let me check: nope it is 1.8 miles) I would be changing from football clothes to soccer clothes. Some days I would keep the football pants with their legs pads on when I was feeling in a particularly forceful mood for soccer.


My father (and my mother) would shuttle me between these events and allow me to mediocrely play as many sports as I could, with little to no complaints. While both parents were at virtually every sporting event I took part in, for some reason soccer, the sport my Dad was most indifferent about, is the one which makes me think about my Dad the most.

I have no tidy way to sum up my thoughts. There is no overarching cathartic point which will tie this together. I guess this really is not a post for anyone else but rather a place for me to think out loud. As his life was winding down, and mine was changing from interviewing with the CIA and wanting to be a spy (seriously) to making a living running and writing and talking about it, I spoke to him virtually every day.  He didn't remember all of the conversations.  If a few days went by between me mentioning a marathon coming up and me running it, he would need reminded. 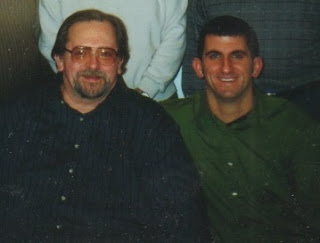 However, I think our bond as father and son was closest those last few years. My favorite moments were when my father, not know to lavish praise on either myself or my brother, would tell me how good of a writer I was.  He would end some conversations where I was mentioning writing a new book or trying to get it into a big chain store with "I really hope you do.  Gosh, you are a good writer."  I told him he had told me that repeatedly but I never got sick of it. His voice conveyed just a touch of surprise, a dash of awe and a bunch of pride.  Those phone conversations were really nice.Not great. Not wonderful.  Just I would end the call with an "I love you" and he would say it back.  Nice is the best way to describe it.

Maybe that is my point. Don't just call your Dad today. Call him tomorrow. And often. Someday you won't be able to do so and you will regret it.
Posted by Dane at 1:15 PM