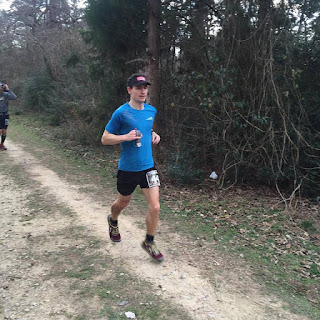 Off the bat, let me say I think I am absolutely horrible at crewing an ultramarathon and my hat goes off to every single person who does it.  Virtually any significant ultramarathoning achievement is done because of the work of many. (I say virtually as there are superhumans like Ian Sharman, who I witnessed at Rocky Raccoon 100 this weekend run seemingly uncrewed and unpaced breezingly to a win in a time of 13:45. I don't think the man paused for a minute for anyone to even crew him if they were there. Just wow all around.)

I have done a few events which needed crewing and I have seen how having a prepared and ready crew can make all the difference. I have also seen how each event needs a vastly different set of rules on how to crew and what to do.  More often than not, the work of a crew is far more complicated than the work of a runner. I won't go as far as to say it is more difficult, but it is one that is challenging for sure. 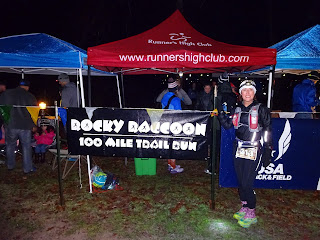 Take for example this past weekend. I was set to crew my best friend Shannon as she attempted her second 100 mile race. She attempted the Javelina Jundred race two years ago on a day of record temperatures (and surprisingly unstocked aid stations for those temperatures which had been forecasted well in advance.) When she got to the 100k mark, realizing she was chasing cutoffs and would be for the next 30+ miles, she wisely decided her kidneys were more important than a finish and chose to bow out and get a 100k finish. I had attempted to crew her at Javelina but think my efforts to do so weren't very good. Javelina's course was similar to the one at Rocky Raccoon in that it is a multiple loop.  Unlike Javelina, however, with a little effort, even a one-person crew like myself could get around to their runner at multiple locations.

(I don't want to get off the far broader topic here too much but here are a few words about
Rocky Raccoon. Those who think it is an "easy" course because they see the aforementioned Ian Sharman or runner-up Paul Terranova's time are in for a massive shock. Sure there are harder races out there, especially since we are in the phase of running where course are designed to be difficult just for difficult's sake. However, after having now run the vast majority of this course in my own DNF 50 mile attempt here 6 years ago, and having crewed it, I can say it is far from easy.) 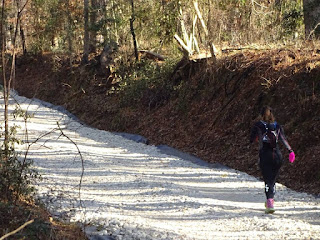 Even on a relatively perfect day for running as it was this weekend, the forest at night can get shockingly cold. The roots in the trail get bigger each loop. The new white rock strewn road which I heard was created to help trucks get across for some construction was slippery and unwieldy. The Damnation Loop is lonely and goes on forever. Do not misunderstand me. It is a well-oiled and run race thanks to many hard years of work from Joe and Joyce Prusaitis before selling it off a few years back. But thinking it is easy will have you DNfing at mile 60, believe me.

As such, I was excited to be able to provide help where and when I did. And I realized it was so much more different than running a race (if I hadn't already.) While Shannon fell short of finishing (mile 93) because of hypothermia which fell a few dozen racers during the night, I was still very proud of her achievement. It also got me to thinking about the importance of having a good crew. As such, here are a few things I was able to glean.

1. Be tough and firm but gentle and yielding, all at the same time, every second.  Also be funny and serious. Simultaneously. See how easy that is?

2. Take care of yourself.  The only way you can be of any use to your runner is by making sure you are also fed, hydrated, and rested. Don't eat your runner's favorite food, though, you ingrate.

3. Discuss, discuss, discuss. Ask your runner what they want to eat before the race. They may not have the energy to discuss this with you during the race. Sure, things will change but having an idea of what they might want is paramount to success. Same goes with whether they want you to coddle them, yell at them, talk to them during the run (if you happen to be pacing as well as crewing them) and all pre-race strategy. You will undoubtedly not be able to think of everything which may come up but no amount of talking about what may happen is bad. 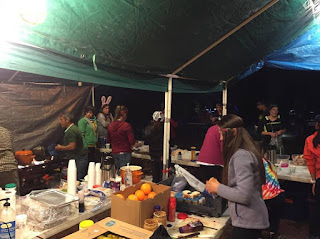 4. Allow time. For everything. Whether it is getting to the start, to an aid station, filling bottles or packs or whatever. Chances are high everything will take longer than you think and the last thing you need is to be late somewhere.

5. Cheer and help others. There is a high probability you will have some downtime during your day.  If so, lend a hand to people you don't know. Obviously, don't get in the way and ask before doing so but rarely will anyone turn down another helping hand if they need it.

Besides volunteering there are few ways that allow runners to really give back to the sport they love so much. Taking part in helping someone create a lifetime memory will help you create one yourself.