When I travel the country giving speeches at races, one of the central themes I speak about is how runners are, as a subset of the population, some of the most warm, caring, and giving individuals. Perhaps this seems to be pandering a bit to the audience given the running shoes most are wearing.  However, I back it up with not only anecdotal stories (and tons of them) but actual evidence. Time and time again, throughout history, runners are the first to accept differences, advocate for change, and push for equality. 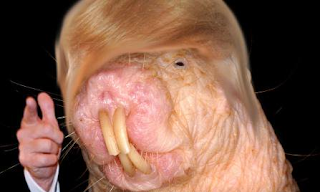 Which is why if you are a Trump supporter, the running community wants nothing to do with you.

Before you ask, yes, I have been granted the authority to speak on behalf of all runners. It was bestowed upon me at the last meeting. You weren't there? Must have been at your Ku Klux Klan Trump rally.

In all seriousness, ours is a sport where strides in race relations, gender relations, sexual orientation, etc have been made decades before the general population followed suit. How can you possibly be part of that great history and stand behind a racist, sexist, misogynistic, philandering, opponent of marriage equality?

Runners out other runners for cutting courses in rather meaningless races and police the integrity and honesty of all those who line up on race day with a fervor that is rather shocking to most who don't run. (Often the refrain is "Who cares?  It is just a race!") When Mike Rossi obviously cut the course at the Lehigh Marathon, the Letsrun.com community lost their gourds.  When a guy obviously fabricated a run across the country, Sherlockian runners tracked down his story.  It was runners who first called bullshit on Paul Ryan's claim to have run a sub-3 hour marathon. This community does not have room for people who make bald-face lies that are harmful, divisive, and done with zero remorse or accountability.  Let's look at a few of Trump's statements.  (I actually had to triple check to see if these were actual quotes because they just boggle the mind.)

"I'm self-funding my own campaign." LIE

I could honestly give you 20 more examples but it is quite clear that lying doesn't deter Trump's supporters. Neither does calling Mexicans rapists, alluding to wanting to have sex with his daughter, wanting to punch protesters in the face or anything else. How? How is this possible?

A few months ago I tweeted that the difference between any person running a race and Donald Trump was that in a few months, even the slowest runners would still be running and Trump would not. I was wrong. I am not alone in how wrong I was and how baffling it is that people support him. But it is not the random person with horrible views that is the biggest problem. Those people exist in all walks of life. It is the myopic, ignorant fools who follow and raise that random person up to a higher level which frighten me the most.

Which is to say that given everything I have seen in the running world over the past 157 marathons, 15 years and countless miles traveled, there is no room in the running world for those who support Donald Trump. In a community where acceptance (not tolerance - there is a difference), growth, and brotherhood are the common tenets of what makes us all put one foot in front of the other, there is no reason to step backward into Jim Crow, religious persecution, or gender inequality.

As runners we like to hold ourselves to a higher standard. It is time to start backing up those words with actions.

ADDENDUM: This, and my fervent stance against Trump has cost me over $40,000 in salary, partnerships and speaking fees.

Consider supporting my continue fight to spread the word of ignoring the impossible to people world-wide at my GoFundMe Link.