Quick, without googling, who was the second female finisher at the 2011 Boston Marathon with a time of 2:22:38? Her time there was the 7th fastest time run by a US woman ever? Hints:

That should be enough for anyone who follows running to answer the original question. But in case you didn't know, the answer is Desi Linden (née Davila.) Yet, you'd be hard pressed to find many stories about her successes in any of the main press. Even delving into the running world, there are many other women who you will see love given to instead of Desi. She doesn't have a pedigree. She doesn't have a flock. She just has oodles of success. But we know why you don't know much about her.

She's not NECESSARILY (and for the love of god please read that with all due mocking emphasis) "pretty." 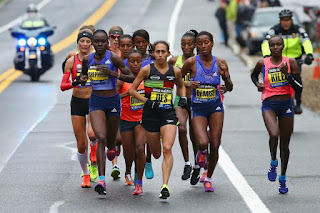 (And I am using a second parenthetical here to reallllllly get this point across: I do not think Desi is unattractive whatsoever. We clear? Fantastic.Thanks for reading.Go back to the article. Seriously.  Why are you still here?)

And pretty sells. (Sidenote: for Eff's sake, do a Google image search for Desi. Better yet, just look at the picture here. She isn't even on the top of her own name!)

We saw NASCAR trying to push Danica Patrick for years as a gorgeous woman. She was all scantily clad in GoDaddy.com ads and whatnot. We keep trying to squeeze Serena Williams and Ronda Rousey into dresses and flaunt their "femininity." Just stop. Please. It is embarrassing to everyone involved.

Whether Serena, Ronda, or Desi are pretty should have absolutely positively nothing to do with how they are marketed by Madison Avenue. It does. But it shouldn't. Of course, a physically appealing specimen of either gender is easier to sell than one less physically appealing. However, for men, it is an added bonus, not the entirety of their package. Men, don't HAVE to be good-looking for people to care about them as athletes.  It should be the same for women. I don't care if Serena looks nice on the cover of the ESPN Bodies Issue. Whether Rousey puts on a little black dress and struts around at awards shows has no bearing on her ability as the most dominant female MMA fighter ever. Which brings us back to Desi.

In the past few days since the Olympic Marathon Trials in Los Angeles, two stories on the women's side have grabbed attention: Kara Goucher dropped F-bombs about Alberto Salazar and Shalane Flanagan collapsing in the arms of Amy Cragg at the end of the race. Kara finished 4th in the race.  Shalane finished third. Amy, only mentioned in stories because she caught Shalane in her moment of "sheer exhaustion", won the whole freaking race. And Desi? She was second overall. Again. 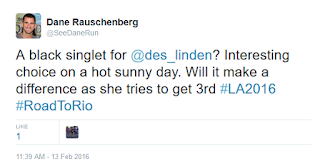 If you want to take as second to try and recall what Desi even wore during the race, go right ahead.

The only reason I know what she had on was because I tweeted how black might be a bad choice for a sunny hot marathon. I don't know because of all the articles about her second consecutive silver-medal showing in an Olympic Trials.

Perhaps Desi doesn't seek the attention. Maybe she prefers to be behind the scenes. It is even possible she is a horrible person that no one wants to talk to. I highly doubt any of those are true but I am playing devil's advocate. I almost hope they are the reality and the lack of coverage is not because she is plain-ish. Or god forbid because she is brown. I don't even want to think we still live in an American where those who have even an ounce of dark in their skin will get the shaft. But not mentioning it as a possibility would be folly on my part.

Maybe I am blowing this all out of proportion. Maybe somehow I am just seeing the things I want to see. I say this because it is always nice to pretend I don't know exactly what I am talking about. I think it is called humility. Or bullshit. I have never been good at either.

Here's hoping that over the next few months between now and Rio we get to know a great deal more about Desi and Amy Cragg. Sure, we should learn about Shalane as well if any of the numerous other magazine articles won't suffice. 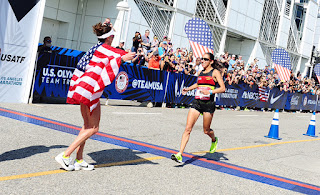 But diversification of our knowledge of the athletes representing our country is indeed something we should demand. Widespread knowledge amongst most runners of the elites in our sport is already at a premium. We shouldn't bottleneck it more based who looks best in bunhuggers.

Yeah, you want the coverage, you gotta have "the look." By which I mean the conventionally attractive look. Suzy Hamilton is a good example- she was all over the media back in the day, even when she wasn't performing well. There were plenty of athletes way outperforming her and not getting a fraction of the coverage (or perhaps I should say lack of coverage, based on a quick google search.

Awe, Desi is my favorite. Always has been. Notice how she just works hard & shows up to race? Very little hoopla around her. And she always wears run clothes, real ones, always a singlet & shorts. Just there to run, nothing more.

While I hope that some of your hypotheses are wrong, who really knows? But I do hazard a guess that she is more isolated by The Hansons. They focus more on running than media appearances.

Well put Dane. She is a God among mortals in running conversations.

I agree with Dane. She is an incredible athlete but there was little to no time spent on her huge accomplishment this trials period. Was it because she doesn't run for Nike? Was it because she was wearing more clothing than the majority of athletes? Or maybe it was because she focuses on her training versus how much social media she can present. I have a feeling she is going to do extremely well at the Olympics. She said she was going to sit back during trials and that is exactly what she did. She isn't as fatigued or tolled as some of the other competitors.

One word: NIKE. 1st & 3rd are with Nike & 4th used to be (& now isn't because of Salazar's disenguity). Fair analysis here; I think the shoe giant is a big reason for "our" (public perception & popularity) lack of recognizing Desi Linden's greatness.

Actually, she is VERY pretty and not "planish"!!!

I think she is very cute. Not your typical "beauty" according to the conventional media standards.
She has substance. Not only as a runner but as a person and that makes her more beautiful.