First printed in Runner's World in 2015:
Every sport has its own language. To convey essential ideas, shorthand is invented to save time. Running is no different. In fact, you know you've become a runner when you no longer giggle at the word “fartlek.”


But running has a different language from even that which defines its inner workings. Running becomes a mish-mosh of all the dialects of the traveling runner. Once you leave your own comfort zone and local colloquialisms and enter into another, you realize the differences in a language we all think is the same. When we cross a border or fly across a continent, we realize not everyone calls it “soda” or “pop.” Heck, if your fellow runner is from Texas they just may call everything “Coke” and be baffled when you don’t realize they want a Diet Mountain Dew. I mean, why wouldn’t you be able to figure that out?

Having spent some time in Canada recently, which is just different enough for me to think it might

actually be a different country, I got to thinking about our diverse language. Truisms which you feel are absolute are shattered when a completely normal group of people have no idea about which you speak.
What is a drinking fountain in one part of the country is a water fountain in another. Heck, in a few selected places, which obviously are still stuck in 1950s, said device is called a bubbler. You can almost imagine the poodle skirts.

If you happen to wear running tights to a black tie event in the South, someone is apt to say “Bless Your Heart.” Don’t think they are saying something nice. You should have definitely looked at the dress code on the invite. People are going to be talking about you for quite some time.

If you run the Boston Marathon, there is a high chance if you are up in Massachusetts, someone is going to tell you how wicked far that distance is to run. Your friends from Kentucky might wonder if you are fixin’ to go for a shakeout run the day before the race. But if you have some older catch phrases in your arsenal you might reply that you would rather stay home and rest if you had your druthers.

Take a trot through America’s Dairyland and you may hear someone tell you about one whoopensacker of a night. This night was one which was so amazing it almost defies definition. I say “almost” because Wisconsinites invented “whoopensacker” to cover that gap in our language.
If you are trying to avoid baggage fees but still get everything into your carry-on, you may need to pank all your clothes and toiletries down really hard to flatten them. It is almost like you are giving your luggage a snuggie, which people in Iowa know means a wedgie. Don’t be chincy, though, others in Ohio might tell you and just pay the baggage fee. It’s just a few bucks, your friend in Colorado might say so they have no idea why you are faunching about it so much.

Yinz from Pittsburgh and youse from Philly might wonder why y'all from Mississippi are being so snoopy on your ex-girlfriend’s Facebook page. Have a grinder, sub, hoagie, po-boy and relax. In fact, go for a jog in the forest and run through a crick. Better yet, go down the shore like your Jersey buddies. If the road is without a shoulder or berm, you might be able to run on the tree lawn. Unless, of course, you are in California where those weirdos call it a parking strip.

You might be surprised to learn that some in New York call “sprinkles” jimmies, especially when you learn that “jimmies” is slang for male contraception. Seriously, you sprinkle them. They are sprinkles. 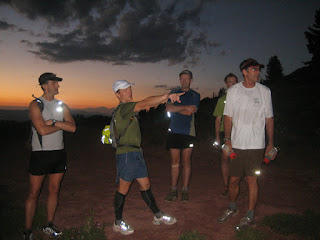 While you might meet your buddies kitty corner from the Plaid Pantry in Oregon, you would meet them catty corner from the QuikTrip in Oklahoma. After a hard track workout in the Midwest you might be happy your Mom has the potluck dinner because you ate the hot dish when you were coming back from Minnesota, dontcha know. If you are thirsty, you can always drink from the faucet, spigot or heck even the spicket.

Regardless of where you go, you will learn on your runs that what we think is the same is not the same. But while you may call the sidewalk the pavement or add hella to modify how hard your workout was, know that speaking in terms of sweat is something which all runners can relate.
Posted by Dane at 1:39 AM