It's All About the Weather

It is not how fit you are, what the course is like, what you ate the night before or anything else. Being under-trained, or overcoming a big hill, or puking out some bad food are often things you can't get over relatively quickly in a race.  But the weather on race day is the one variable which will bring you to your knees the hardest. 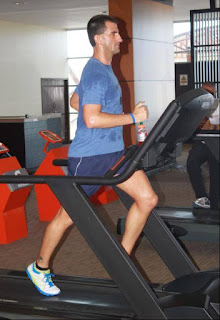 Of my top ten fastest marathons, only one came when the weather was inclement: the Steamtown Marathon in 2007. Run on the day that Chicago infamously had to blackflag its race for heat, how I was able to put this race out of the hat (after a wrong turn added extra miles) is beyond me. In fact, as I look through even the top 25 marathons I have run there are many different things which present themselves. I was in various level of fitness. I ran them over various terrains. Different elevations. Various times of my life. But one things remains the same: nice weather. 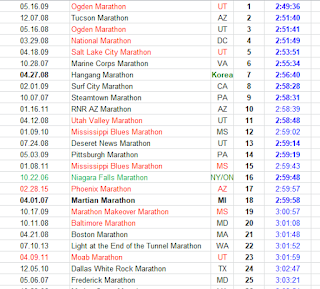 I don't say this without proof.  In fact, I have written down what the weather is for every race I have ever run. (They are all accessible on this very website on the right sidebar.) Over and over again, I perform best when it is cooler.

Obviously there are going to be some people who feel they run better in heat and when people just want to "feel" something, you can't tell them otherwise. But the science points to how our bodies warm the ambient air around us by 20 degrees when we run which is why we are told to dress for the run we will be having in the middle rather than the one we start with.  Otherwise, you end up sweating so much that your clothes get soaked and even if it is cold when you start, you will be drenched in sweat. Then when you finish you freeze because of all the wet clothing. 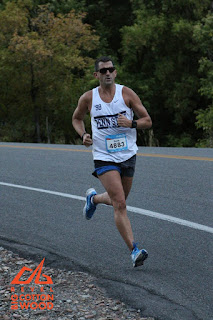 Note that with this analysis, I am primarily speaking about longer distances races. Shorter distance races like the 100 meter dash (which I still contend is more like power lifting than it is running) need a warmer temperature to keep those ridiculous fast-twitch muscle fibers from snapping like a twig. But the longer you run, the cooler you want the temperature to be. Again, don't take my word for it.  Read this exhaustive study here.  Researchers reviewed weather and race data from past Olympics and determined the ideal temp for elite marathoners was 49.4 degrees for men and 51.8 degrees for women. Athletes in sprint events fared better in warmer temps. For the 100m dash, for example, men did best when the race day temperature was 72.6 degrees Fahrenheit, and women excelled at 73.4 degrees Fahrenheit. Since they run so much faster than us mortals, elite runners are in the weather for far less time than the rest of us.  A person finishing in 5 hours for a marathon is essentially running in a different day than when they started, the way temperatures climb.

So, next time you are looking for that fast race, it may behoove you to check out its historic weather even more than what type of downhill course it has or anything else people use to determine how they will have a good time. Planning for the factor which will probably have the biggest impact on your race, shouldn't be left to chance.
Posted by Dane at 2:42 PM