Beat the Train - A report on Denz

I can always count on my friends to run some crazy races.

My good buddy Denzil, located in England, often has tales of cross-country mud runs and feats of strength thrown into what would otherwise be a normal 10k. However, even for Denzil, who often wears a jester's hat

or something that looks like it is part cow during races, 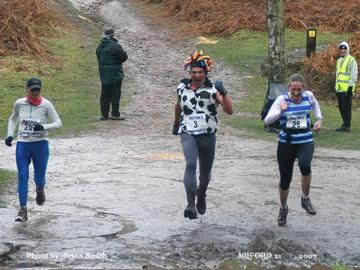 his last one, the 25th running of Beat The Train, sounds so darn fun.

"Race the Train takes place alongside as far as practicable the route taken by the Talyllyn Railway on its journey to Abergynolwyn and back. In order to do this all courses use a mixture of public roads, lanes, un-metalled roads, tracks, agricultural land, and rough grazing pastures. The terrain varies all the time and can be very wet & muddy in places, the routes also ascend and descend quite steep terrain and runs on narrow footpaths with little chance of overtaking."

Or to boil it down to Denzil speak: "Its all off road and very muddy - Cracking race".

I know the US has some of these races, like Muddy Buddy events held in certain parts of the country, but I would love to see more. Races where you basically throw out your watch as you know finishing or competing against others is the only true test of how you did. And without the ever-ticking watch on your arm, there is more fun to be had.

And who couldn't add a little fun to their run?

Even though he did not beat the train, (given that he also ran a 10k earlier in the morning to accompany this grueling 14 miler), I am pretty sure that if he had a stout lager in his hand at the end, he was a happy camper. 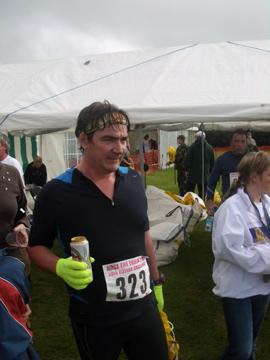 It looks like Denzel runs for all the right reasons! I think he's my kind of runner. :) Thanks for sharing.

Very cool! I need to get back in touch with Denz. I miss his questionable headwear and fun expressions.