Last year I started a tradition I hope to be able to keep up for another 50 years - running my age in miles on my birthday.

On 32 birthday in 2008, I ran the tail end of a 4 mile race I helped direct in the Reston, Virginia area, picking up the mile markers as I ran, sweeping the course for any debris. I then went for about 21 miles of running with my friend Jay Wind, wherein we were belted with some of the hardest rain I have ever felt in my life as we ran along the W & OD trail. (On the map it is the "F" east of the mile 20 marker to RT 495 and back along the red line.)

Lightning crackled overhead and Jay said, "Well, at least we aren't underneath power lines". This was funny since the path we were on follows directly, a long line of massive electrical power lines for miles and miles.

I then packed up Jay's vehicle, which included attaching a balloon arch of a finish line to his comically overflowing minivan. Jay wished to use this arch for another race we were directing about 15 miles away in Georgetown. Jay left to drive on 66 into DC with this balloon arch trailing behind him (if you are from the DC area, imagine this: a dilapidated Minivan, filled to the brim with race cones and mile markers and everything else, with 60 feet of balloons trailing behind it, sticking out of two windows as it rapidly approaches the Beltway.) 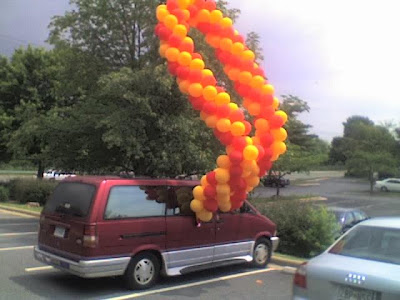 I then went on another 6 mile run in the opposite direction on a day which had started warm and humid, rapidly turned into horrible storms and was now cooling a touch and had the sun shining brightly.

After finishing my 6 miler, I hopped in the car and headed into G-town myself. Along side the road on Route 66 was a large conglomerate of mostly popped and whipping in the traffic-induced wind, balloon arch. I did not get a chance to take a picture of that as I was laughing too hard.

Reaching Georgetown I had the pleasure of doing a quick Q&A with some runners at a gym whose building was about half a mile from the start of the 8k I was helping to direct and also run. Michael Wardian and I answered questions for people who had gathered and many were actually running in the race just a short while in the future. It was a very serene and calm setting, especially since most of the people were wearing the bib numbers for the race they would be running!

With this done, I hustled out to the start and seeing there was nothing more I could do to make sure the race could go smoothly, Jay said I should just run it with the others. As I lined up for the final 5 miles of my 32 for the day, I was pleased that I had been able to fit this all in. I had been up at 4 am to drive my friend to the BWI airport from DC before going out to help with the race in Reston. Then after this final 8k, I actually went and had dinner with a friend, called up another friend who I hadn't talked to in years, and wrapped up the whole day by going out until about 2 am with another new friend. Quite the day!

Well, this year I will be getting my miles in without any such rest and hopefully without any of that excess travelling. You see, I will be taking part in the San Diego Marathon held right on my birthday. I have wanted to do a marathon on my exact birthday for years now and here is my chance.

The current plan is to start at mile 7 of the course about an hour before the race starts around 5:30 AM and head towards the actual start line. (If you know me, this is about 2 hours after I usually go to sleep. This may be the hardest part of the entire idea!) I am hoping to time my arrival to get me to the start mere seconds before the gun will be fired so that I can cross the mat and turn around and start the marathon. More than just finishing the 33 miles I will be going for a sub-3 marathon as well. It might be a little ambitious given not only the day's events but the past two months. But that is why they are called "challenges", right?

I will also be taking part in signing books at the expo, and I will be doing so at the Under Armour booth with my good friend Anne Bonney! Anne is quite the traveler herself having run the Antarctic Marathon, although she chickened out on the nude dip in the arctic water. :)

Happy birthday, Dane. Your blog has been such an inspiration to me. I'm training to run my first marathon in eight years (the Tucson Marathon in December), and reading about your weekly races has been great. Keep it up!

You have the same birthday as me! I am only turning 26 so I have a few less miles to run than you! My goal is to run my birthday marathon in September. I also ran the half in Ogden. Thanks for all of the inspiration!