There really is no better way to see a new town than on foot. That is why, regardless of how tired I am when I get off a plane in a new town, somewhere in the next few hours I am going to go for a run. This practice started for me before I was even all that much of a "runner" per se back in 2000 in Florence Italy. Studying law for a summer in the great Italian city, I was the first of my roommates to arrive that summer day. Wanting to shake off some of the jetlag and see the town, I laced up my shoes and went for a run.

Long story short, I got lost. Bad. I blame it on the cute Italian girl on a bicycle (not a racing one, but the kind with the basket in the front, filled with all sorts of yummy looking food) who led me astray. Two hours later and lord knows how many Italians I questioned, I found my way back home. No idea what I was thinking, as I left my apartment and neither checked what street I was on or what the building was called. Nevertheless, for the rest of the summer, I was directing my pals to a nook or cranny that I knew about in the city because I had spent hours running
around it looking for my particular nook and cranny of an apartment. 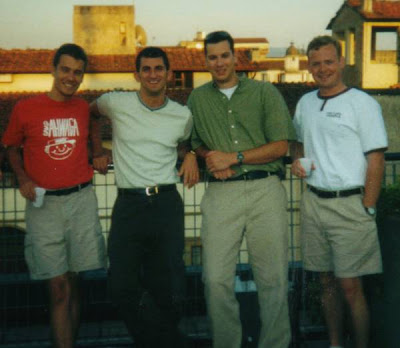 So after landing in Stillwater late last night for the Stillwater Marathon this weekend, I thought about going for a run. But it was dark and I was exhausted from a day that included losing my wallet and then having the person who found it, "rewarding" themselves for their effort by liberating me of all the cash in it. So this morning, the shoes were on and away I went. Fortunately, in 2009, the internet is far more helpful in finding your way around a new city so after plotting a brief course, I was ready to go.

I immediately noticed the humidity. It wasn't bad and given the temperature reading on the bank was only 67 (it had been in the 90s here earlier in the week) I wasn't complaining. But boy, the difference between the high desert of SLC and places like this is instantly recognizable.

I ran past a beautiful body of water called Lily Lake with a small playground situated in front of it. The few children playing waved and shouted hello without hesitation and the mothers did not hurry to see who the stranger was running by.

I passed through some old style homes which I just don't see too much in Salt Lake and reminded me a lot of the oil homes in my hometown of Titusville. After winding through the outskirts of the downtown and taking in the fresh air and lilacs blooming, I headed down towards the St. Croix river which separates Minnesota from Wisconsin. Looming ahead was the Stillwater Lift Bridge. 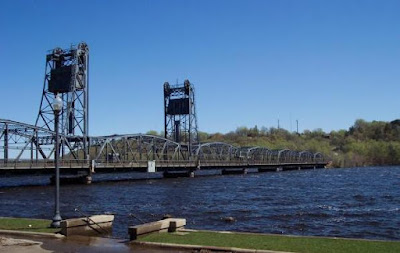 Down along the waters edge was a paved path that just was begging for me to run on it. However, and I really cannot explain why, there is just nothing like running from one state to another over a bridge. I love it. Boundaries set by man are so arbitrary. My property ends here and yours starts there. This is the state line. Don't trespass onto this land.

But natures boundaries are not to be trifled with. Here is a mountain range. You must go around. Here is a river. Swim it, find a way around, or build a bridge over it. They are set. Permanent (or at least as permanent as things can be). So I decided to run to Wisconsin. After stepping foot in Green Bay Packer land and immediately getting the hives (I am a Chicago Bears fan after all) I hightailed it back to Minnesoooota.

I could see on the way back over some beautiful homes situated on a cliff race overlooking the St. Croix River. So I turned my rudder toward these homes to see the view they had. On my way up a pretty steep hill I passed the most adorable park (FYI, I passed about 7 children's parks in my 7 mile jaunt. Stillwater seems to know how to take care of its youth). I wish I was making this name up as it is too frigging cute to be true but the name of the playground area was Teddy Bear Park.

Time for me to head back. I needed to shower and eat before the expo and my speech began. And I knew exactly where I was going to eat: Darla's Grill and Malt Shop and downtown Stillwater. You simply can't pass up a Malt Shop.

Seven miles and my little tour of this gem on the St. Croix river was over for the day. I will do the extended 26.2 mile tour in 48 hours. 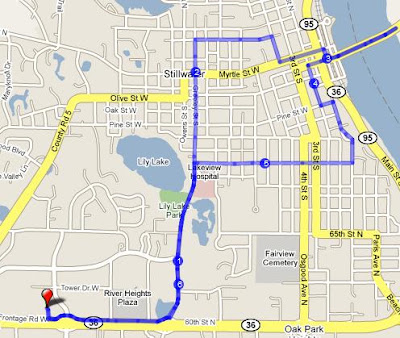