While Others Find Reasons Not To...

Some are too busy doing what they shouldn't be able to.

At the Ogden Marathon this past weekend, I heard of a great story that I wanted to share. At first, I was going to incorporate it into my own recap but realized that a sentence or two couldn't do it justice.

At the awards ceremony after the race I remember remarking that the female winner of the marathon did not have that "usual" look to her. She looked a little older and perhaps, just a smidgen heavier than your usual winner. Now, please let me clarify my use of the comparative adjective here. The winner did not look "old" or "heavy". Not one bit. Not one single iota. I am calling her neither old or heavy or anything negative. Simply -er on both of those words than the usual winner. You know, enough that it gives you pause.

It was not surprising to learn that the women's winner, Anna Judd, was a mother. Let's be honest here -we are in Utah. Heck, even I am almost pregnant. But to learn that she was less than a week from her 40th birthday and that her time was 2:58, well, that's when I know I have a little story I need to share with my readers. 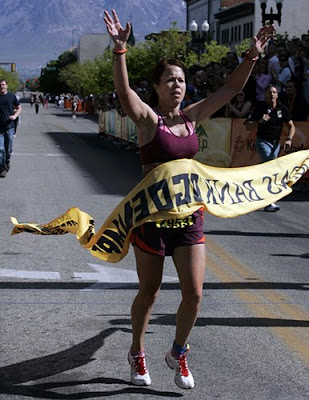 Anna has run the Ogden Marathon 4 times, including the inaugural race in 2001. Her goal was to simply break three hours "because I haven't done that. I did not expect to win, but a marathon can be anybody's day." This sentiment was echoed by the men's winner, one Seth Wold of Salt Lake City, who simply went out and shaved 5 minutes off his marathon win time of the year before. FIVE MINUTES! When asked about the pressure to repeat, Seth simply replied "I realize with running that you can only control your own race. If somebody has a better race, then it's just their day and I'm happy for them." But one one came close to Seth as he went on to win by over three minutes.

Anna, however, won a nail-biter only by passing the eventual second placer finisher in the final few miles and winning by 22 seconds. But what a story for both these athletes. Seth is definitely an up and comer on the national cirucit with a time like 2:22. And Anna?

Well, as a 40-year-old mother-of-one, she just nullified all those excuses out there I hear from others who say that either Father Time or parenthood is what is keeping them from achieving. I guess they will have to find another excuse now.

Stories like this make my day! I love hearing about "average" (i.e. not paid-to-train elites) people winning races and posting great times. Congrats to Anna!

And congrats to you Dane on your "almost" pregnancy ;)