At The Races: Karsten Brown vs. Dane Rauschenberg

The other day I asked my friend Karsten Brown "Have we ever figured out our lifetime head to head stats? We need to." 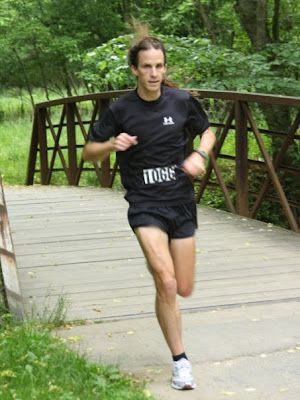 "Let's take a look, shall we? I may have missed some races from pre-2004 (particularly if the results weren't online), but this is what I got out of a few minutes of research..."

What follows is his solid hard work in finding the races we have ran against each other. The ironic thing is that Karsten and I have rarely seen each other outside of a race. Plenty of other friends who were in my running club have never raced me or rarely done so. Take my friend Dan Simonds, w(ho I saw probably three times a week for 3 years) has raced against me exactly twice - both in Boston at the Marathon (we are tied 1-1!)

I think Karsten has found all the results. The only racing I did pre-2004 was small races in Pennsylvania. So the below are the results, Karsten's comments and my retorts. However, the unwritten contest is how just two weeks after I better my PR to put distance between me and Karsten in the marathon, he drops FOUR minutes and now has the lead by 2 over me. The gauntlet has been thrown. Enjoy!

MCRRC Riley's Rumble Half-Marathon
7/25/04 - Poolesville, MD
29. Dane Rauschenberg, 1:29:29
97. Karsten Brown, 1:39:59
Dane 1, Karsten 0. I had quit smoking seven months earlier and was racing a lot but not training very well. I have a photo of me from after this race looking completely wiped out.

Dane's retort: My second half-marathon EVER.

Dane's retort: Nearly 90 seconds slower than my 5k PR I was more consumed with the party I was going after directly after this race.

Lower Potomac River Marathon
3/12/06 - Piney Point, MD
11. Dane Rauschenberg, 3:22:29
12. Karsten Brown, 3:22:35
Dane 3, Karsten 0. Tight finish! I don't remember how this went down-- whether I got caught near the finish or whether I was catching up. The former is more likely, given that I was once again coming back from injury and had been off from mid-November through mid-January. Pretty sure I was satisfied with my 3:22!

Dane's retort: I did not pass but barely held off Karsten at the end. Heard him coming even though at this time we were not even acquaintances. Oh yeah, it was also my 10th marathon of the year.

Dane's retort: I was the 3:20 pace group leader. Not an excuse but a fact. It was also my 17th marathon of the year.

Dane's retort: I look cool as a cucumber because I was 4 minutes behind Karsten. I was also in between my 28th and 29th marathons of the year. Besides the half-marathon run the day before the 1st marathon of the year, this was my only other non-marathon race. However, it spurred me onto to my first "placing" ever in a marathon as I took 3rd in that 29th marathon.

Dane's retort: With a 2 minuted PR in my 39th marathon of the year, I think I may have been more excited.

Dane's retort: My 47th marathon of the year.

Dane's retort: Karsten remembers correctly. Horrible day for racing. Also mass confusion at the top as I somehow became the 4th finisher when I had been third for miles and miles (and at one point 2nd). Still have no idea what happened to this day but if I had known I was in 4th, would not have let the guy just in front of me beat me.

Frederick Marathon
5/06/07 - Frederick, MD
12. Karsten Brown, 2:55:30
20. Dane Rauschenberg, 3:06:40
Karsten 5, Dane 4. This was the year of Dane intentionally starting at the back of the pack for charity, if I'm recalling correctly, so he was at a disadvantage from the get-go. My "win" here should probably have an asterisk!

I actually ran a 3:03 with the chip time and yes the running around people didn't help but I never would have run a 2:55 on that day. I was not that runner yet.

Dane's retort: I don't know how Karsten did it either. A little bummed I didn't break 30 minutes but since I ran timed mile in 5:16 in the blistering sun earlier in the day I was pleased.

Dane's retort: Very hot. And at noon the day of this race I was vomiting in the bathroom at work from sickness. But by evening I was ready to at least see what I could do.

Dane's retort: I am surprised as well, Karsten. Another superior effort.


So there you have it. A super friendly rivalry where I wish Karsten the absolute best but also hope I beat him every single time. Rock on!
Posted by Dane at 12:09 AM

I love the competition running gives! Whether it is against a friend, the racer next to you at the time, or a random person on the streets, competing makes running more enjoyable. Where else can you get an even head-to-head competition with someone else?

For a fleeting second, I thought I could actually brag that I was undefeated against the Great Dane himself...

But then I remembered Steamtown 2007. Okay, so Dane got me back on that one big time. I just remember that my ragged 3:25 was roundly crushed.

In the event of a tie breaker, I fear I will need to find a way to drug or otherwise compromise Dane before the start...

You nailed it. You run like hell against someone and then turn and hug them at the end!