I am come to a grudging acceptance that people do not like history. It routinely ranks at the bottom of all subjects in high school, people lament how boring it is and what use can knowing dates and places so far back be to them today. As a History major and a lover of factoids, trivia, and all sorts of knowledge (you can ask any of my friends - there are few people who love the proliferation of the Internet and easy assess to the answer of any question you may have more than me and I do apologize to those same friends for my frantic searches for instant info for no reason at all and at random times) I do not get this but I accept it.

A subset of that is accepting that vast, VAST majority of runners and marathoners know so damn little about how we got to where we are today. I will be speaking to a novice runner or marathoner and mention Dick Beardsley, Bill Rodgers, Steve Prefontaine, Paula Radcliffe, Emil Zatopek, Abebe Bikila, Naoko Takahashi, Song Ke Chung or Lasse Viren and get blanks stares on 90% of them and maybe a hint of recognition on one or two.

(FYI, here is a quick Dane-tutorial for those of you who are curious but cut and paste and google is too wearisome for you.

Dick Beardsley - staged the epic Duel in the Sun with Alberto Salazar at the 1982 Boston Marathon.

Paula Radcliffe - Faster than most male marathoners can ever even dream of being. Ran a 2:15 WR marathon in 2003

Song Ke Chung - Korean who won the 1936 Olympic Gold but because Japan was occupying Korea at the time, he was forced to run as a member of the Japanese team.

Again, I get it. We are obsessed with the "I". But when I get to one particular person who some may or may not know, I feel it is their duty to know more about this person. Their name? 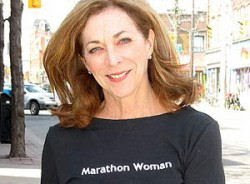 I had the pleasure of first meeting Kathrine a few years ago at a marathon but it was last year at the Akron Marathon where we shared some stage time that I was able to actually converse with her for more than few seconds. since then we have exchange a smattering of emails. I am also the proud owner of a hand-written letter from Kathrine wherein she told me how much she enjoyed my book. Hard to explain how much that means to me. Why should you care about Kathrine Switzer? Let me break it down for you by gender.

You should care about Kathrine Switzer because without her chances are you would not be running a marathon today.

You should care about Kathrine Switzer because without her chances are the marathons you do get to run in would still be rinky-dink little affairs with no amenities, no crowds, little to no prize money and a complete lack of anyone giving a damn.

Am I being a little dramatic? Perhaps, but not much. You see, in 1967 Kathrine became the first women to "officially" run the Boston Marathon when she donned bib number 261 under the moniker of KV Switzer and made national headlines when Boston's irascible race director Jock Semple politely requested she remove herself from the race because he thought perhaps she may not be welcome by other runners that day. I am, of course, kidding.

Jock leapt from the press trunk, Scottish Brogue barely intelligible as he yelled and clawed at Kathrine in an attempt to forcibly rip the bib number from her sweatshirt. Only Kathrine's boyfriend at the time, a hammer thrower from Syracuse who was running with her in the race, saved her from being assaulted when he lowered a shoulder into Jock and sent both the angry Scot and the marathon world reeling. 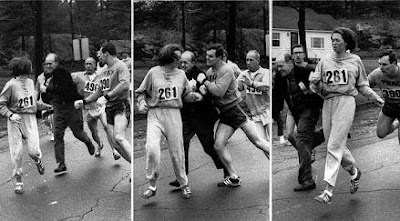 The rest, both pre- and post-Boston is history and history well told by Kathrine herself in her book, Marathon Woman. From her earliest days, Kathrine did what she could to show that women were athletes, not just female athletes. To say she is solely responsible for the female sports movement would be incorrect, short-sighted and rob so many others of deserved attention. But to say that she has made the running world an exponentially better place, not only for women but for men, is something that can be said without hesitation. Reading her book will show you why. 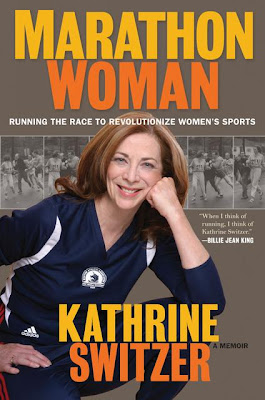 You know those precious finishers medals we all so crave? Well, the first marathon to ever include them for all finishers, first to last, was Kathrine's Avon International Marathon Series. Do you think all the amenities we enjoy today (albeit I think both Kathrine and I may agree that some of them may be a little too much) would be available if only the gruff and tumble, 2:50 and under marathon set were the only ones running marathons? Would the marathon still be the premiere Olympic event (closing the Games ever four years) if there was no female component added until 1984?

What? You didn't know there wasn't a Women's Olympic Marathon until just 25 years ago? Well, (and obviously others were involved) you can thank Kathrine Switzer. Making an undying priority in her life, Kathrine made sure that the ridiculous notion that women could not handle the challenge of running anything over 1500 meters was torn asunder when the first female Olympic Champion ever, Joan Benoit (now Samuelson) burst through the darkness of the LA Coliseum tunnel and into the massive cheers of nearly 100,000 people there and millions worldwide. 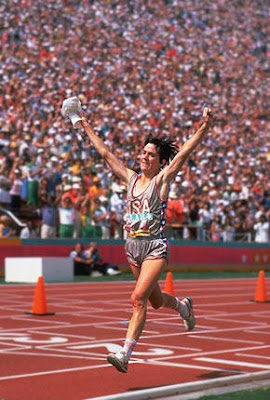 Want chills? Click HERE and fast forward to about 2:15. No Switzer? No Benoit in 1984 as the host country hero in an iconic event which launched a million female runners.

Throughout Marathon Woman you are viscerally hoping that Kathrine is able to overcome the odds both in her own life and with the Olympics, even though you know the outcomes of both. For the same reason people flocked to Titanic when the ending was clear (Spoiler Alert: The boat sinks) runners of all distances should add this book to their library.

I have a list of famous runners whose times I want to best. As I tick them off (e.g., first Olympic Marathon winner, certain former cyclists, etc) I feel good because I was able to pass a milestone runner. When I broke Kathrine's PR of 2:51, I was just as happy not because I ran a faster time than that upstart female runner who started all this hullabaloo back in 1967 but because I ran a faster time than a runner who ran pretty darn fast and just happened to also have breasts. Kathrine's exuberance upon breaking the 3 hour barrier for the first time is echoed in so many other of us who have broken our own time goals as well, regardless of gender. And she happened to look super pretty doing so as well. (This is not a slight whatsoever. Kathrine took pride in looking good while she ran.) 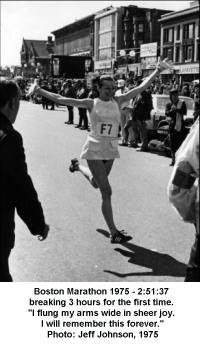 Marathon Woman should be read, if for nothing else, than for Kathrine's energetic writing style. Truthful and with no pretenses, she became one of my favorite authors ever when she says , on page 84, how she enjoyed the Boston Marathon because its later start allowed for her to, among others things, take "a significant poop."

If you can say that, and still remain 100% lady, as Kathrine does, you are something special.
Posted by Dane at 10:46 AM

I was reading this book on my way to Akron last year, and was thrilled to meet Kathrine, hear her speak, and briefly meet her. Her book is phenomenal - thank you for hopefully introducing it to more people!

I met Kathrine last year at Akron when I ran the 8k. I watched the press conference and after she recognized me as one of the runners and came over to say hi and good luck. I was star struck and impressed that she was so friendly.

You are not alone in your love of history. In fact, I happen to know a lot of people who love it.

So keep talking about history, there are many of us who will listen.