After the 9 plus hour drive back to SLC from Mammoth yesterday, I was not looking forward to the short rest I would be getting before heading out to Sunriver, Oregon this morning. I was, however, looking forward to spending time with the Pacific Crest Weekend Sports Festival people. As one of the 52 Marathons I ran in 2006, the Pacific Crest Marathon held the distinction of being the race held between the two toughest marathons I did that year- Estes Park and Leadville. As such it was sort of a breather of sorts and a chance to enjoy a nice run. As I mention in my book, with the cornucopia of events being held that weekend (look below under the banner) one would expect one if not more of the races would not get the best treatment.

From personal experience I know the running events did not suffer and from word of mouth, everything else seemed to go just as well. It was hard to believe it had been three years since I had been here last but when the opportunity arose for me to travel here again for a book signing and potential speech, I was happy to do so.

I was greeted with a hug by Race Director Carol Anderson who immediately made me feel at home. Even with a cellphone in one ear and three people waiting to ask questions, she was cordial and sweet and directed me to her Director of Marketing & Logistics, Jessica. I was then told where my booth would be and where I was staying. I checked into a gorgeous home, unpacked and got ready for a run. It was just a beautiful day and one I did not want to waste. I figured a nice 13 miler (or once around the course which doubles up to make the full marathon distance) would be great. but then I realized I hadn't packed any running socks. How the heck did I do that?

I was trying to think back to see how much I would remember of the course and here and there little parts of the run, which followed a bike path around a good portion of the private planned vacation community of Sunriver, would jog my memory. 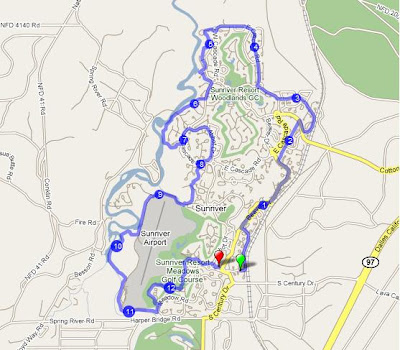 Unfortunately, rather early on I could tell that the lack of socks was going to cause me some problems. I also felt unduly tired. And for whatever reason I could not discern if my pace was fast or not. I just felt a little winded. I was making mental notes along the way of any signs out of place or any thing that looked like it may have been moved by nefarious types to mess up the runners, but just about everything looked on the up and up.

Around 8 miles or so, I looked at my watch for the first time with any sense of trying to figure out my pace. I realized I was running far faster than I had thought I had been running. At least I felt pretty good about feeling winded!

A few miles later I picked up a runner in the distance and to take my wind off my now bleeding feet, I decided to try and track him down. With the twisting and turning of the path, he would flit in and out of my sight, teasing me with the appearance of getting closer only for me to realize that a little loop in the road rounding a clump of trees of body of water made him appear closer than he was.

About a mile later I finally passed him and then immediately had my shoe untie. I bent down to rewind the unruly sneaker and noticed I was turning my right foot into quite a bloody mess. Shoe tied, I stood up and the guy had caught me. We fell into step and began chatting. Mark was his name and both he and his wife were going to run the half marathon. Mark is gearing up to run the Portland Marathon and needs to drop about 5 minutes from his current PR to qualify for Boston. His wife, Cynthia has at least a 3:12 to her credit and seems to be a pretty darn good runner. I found out we all ran Tucson last year and thought about how nice it must be to have a spouse who shares your passions. 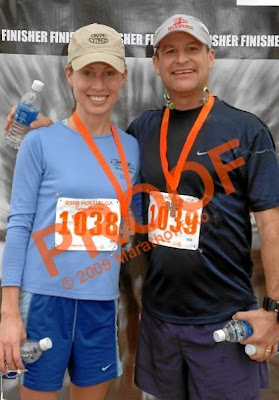 Mark turned off to finish his run in a different direction when I came to a very familiar finishline area. I now vividly recalled running as hard as I could to this finish with my friend Bob snapping some video footage of me as I crossed the line. I was running hard because I had about 90 minutes to shower, drive the 30 minutes to the Bend airport and catch my flight to go back to Virginia. My 3:16 time was, at that moment, the 3rd fastest time of the year and one of my fonder memories from the entire adventure in 2006.

Somehow, today, I ran this loop in under 90 minutes. I had no intention of going out in a sub-3 hour marathon pace and upon finishing felt that my slightly out of breath nature was somewhat justified.

I soon realized how dehydrated and hungry I was so I went and scarfed down an entire pizza (it was only a 12 incher!) and have not stopped drinking water since. Felt good to buts out an unexpected good run and I can only hope that all the participants of all the races have the same good experience in their race as I did on my training run.

After my shower found all of the cuts and tears I had administered to my feet I made a promise to buy some running socks at the expo tomorrow. Probably some really ugly ones, juzt cuz.
Posted by Dane at 8:44 PM