I recently announced to my friends on Facebook that I had some exciting news about the Drake Well Marathon to share. After whetting their appetites, I have decided to unveil the special news.

Not too long ago I was electronically approached by First Lieutenant DJ Dryer of the 82nd Airborne Division stationed in Afghanistan. 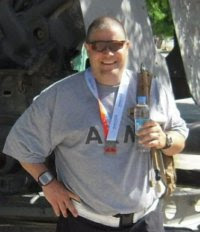 In his email he said, "My friends and I are interested in running in the Drake Well Marathon this year. The problem is we are deployed with the US Army." First Lieutenant Dryer and I exchanged a flurry of emails (he was amazed I was up so late - I told him that so are many others) and came up with a solution:

the Drake Well Marathon will be run simultaneously in both Titusville, PA and South Kandahar, Afghanistan!

At this point, we have three confirmed runners:

(ages to be verified - 1L Dryer says they look too young to be that old. I am kidding. Those are my words.)

All of the runners in the Drake Well Marathon - Far East Version will run 26.2 miles on the same day as the Drake Well Marathon and email me their times. They will receive finisher's medals, t-shirts and will be included in the final results. We can only hope that when the race is run again in 2010, all of these fine men and women will be home to partake in it in person. In the meantime, we are doing what we can to show the troops we appreciate their sacrifice and to illustrate how running knows no boundaries.
Posted by Dane at 11:13 AM

That is so very awesome! Glad you could work it out. Thank you over there to the soldiers reading this blog. Know that you are appreciated by many for all that you do.

That is such a great idea!

What a great idea!

{will run for margaritas} said...

I'm super excited for them, not only bc I'm a military brat but I'm from Arlington, VA - so I feel even more connected to them!

Good luck! And tell the guys - thanks for fighting for our country!

This is fantastic. Thanks for your efforts. I am so glad to be participating.