I have had the good fortune to become great friends with a few runners through all my travels. One is named Dave Terrill.

Dave and I met for the first time at the Hatfield and McCoy marathon in June of 2006. I was able to stay with David until a little after mile 7 or so and then finished one place behind him. Sure it was 6 MINUTES behind him, but it still was only one place. Oh yeah, Dave was 49 at the time and I was 2 months into my 30s. 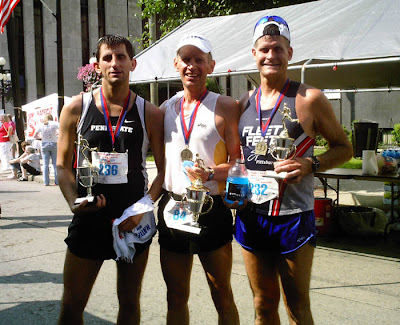 Me on the left and Dave on the right
We then met again in Erie in 2006. It was a momentous occasion for me as it was my first Boston Qualifying time of the year and set forward the rest of the year’s surprisingly quick times. For Dave, he was honoring his daughter who was serving in the army overseas by planning on running a new personal best. Dave said he wanted a 2:52 and I jokingly told him that he should do the “52” portion for me. He just missed that time running a 2:54:16 but took 3rd place overall in the race.

David was one of the very first people to sign up for the Drake Well Marathon in 2006 which was 105.5 laps around my high school track. Hindered by a leg injury he said he did not care what his time was as he wished to be there to help make my dream a reality. In my final lap, Dave stepped aside for a good 10 seconds so that I could break the tape unhindered. I was fortunate enough to best Dave at that race but he still led the lifetime series 2-1.

Dave is off to the side on the left.

Dave has a tough 2007 and 2008. He suffered from some illnesses and injuries. Admitting that he either ignored or misinterpreted symptoms, Dave suffered from some internal bleeding resulted in severe anemia, a 3 day stay in the ICU, numerous whole blood transfusions, and three different endoscopic procedures (Upper GI, capsule endoscopy, and colonoscopy) that were all inconclusive. He thinks the most probable cause was a daily aspirin, 325 mg, that he took with his vitamin supplements for 10 years.

Even though we ran a collective total of 34 marathons in 2007-2008, our paths did not cross once. For those who remember a time of about 10 yearly marathons, that is quite a statement on the marathon proliferation of today.

At the Pittsburgh Marathon this May, I charged up a hill around mile 13 and saw a familiar face (or I guess it was ass, since I was approaching from the rear.) Dave was on the comeback train and while his 3:15 finish was a far cry from his 2:53 PR set after the Erie Marathon in 2006, it was a huge improvement on his times pre-surgery.

So when I received an email from Dave talking about some great racing news, I was really intrigued. He wanted to share with me how he had made a HUGE jump in a his personal best race where people just a few weeks shy of their 53rd birthday rarely make huge jumps in: the 5k.

With mile splits and positions in the race at 5:25(in 5th position); 5:41 (3rd), 5:58 (2nd overall) Dave lowered his PR from 17:53 to 17:01. A 52 second improvement! Of course we both noticed the “52” number and how it always seems to pop up in the most convenient places. But besides that coincidental factor was the absolutely enormous drop in time Dave had made in such a short distance. In Dave’s own words:

“You can imagine my thoughts as I watched the clock ticking towards 17 minutes during the diagonal crossing of the football field. I was making unintelligible groans and gasps with each exhale that sounded primal. I ran the race of my life to date.”

With our lifetime battle tied at 2-2, I have to say that I am quite happy I am directing the Drake Well Marathon, as I am pretty sure Dave would make it 3-2 in his favor at this race.

Thanks. That's an inspiration to any of us who've been stuck at and around that same 5k time, same 13.1 time, same marathon time for quite a while.
I'm really looking forward to the DWM 2009 and running with everyone there!

Congratulations to David on his comeback and improved health!!