I know it is meant as a compliment. I really do. 99% of the time I take it as such. But recently when I have heard it, it began to irk me. Let me explain. 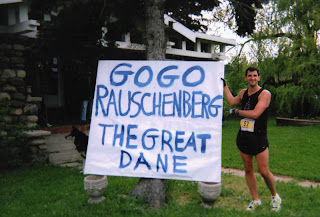 It first started when I ran 52 Marathons in one year. It progressed when I ran four marathons in 13 days, two of those being the Boston Marathon at its regularly scheduled time, then the course again later in the day, followed by one in Korea three days later. Then with my 202-mile solo running of the American Odyssey Relay, I heard it more and more. The problem is I feel the use of the word shows both a lack of both imagination and the desire to push our limits.

Allow me to reiterate the first paragraph’s premise so it is clear. I know that no one who says that is trying to insult me. They are just trying to state that what I am doing seems a little out of the realm of their comprehension. (OK, maybe some are trying to insult me, to which, you really are going to have to try harder. I write on the internet - you don't think I know real insults?)  But there is indeed an underscoring of that word that I think is one of the problems with today’s sedentary American.

Why is running 202 miles crazy? Well, because to 99% of people in this country, running a marathon is still something that seems impossible. A 13.1 miler is still slightly insane and an “I only run when someone is chasing me” attitude pervades 290 million people in these United States. So, without a doubt, 202 miles would seem insane, even to many runners out there. 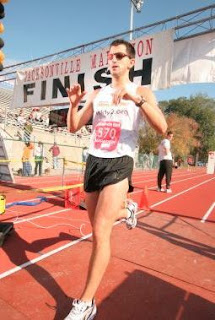 I submit we stop using the word. I think it is the real "c" word. I admit I have been caught saying it once in a while but I really try not to do so. There is nothing crazy about chasing your dreams. No insanity is needed to wish to push the boundaries of one’s own body. In fact, as I have often said, crazy is sitting at home doing nothing eating crappy food endlessly. Insanity is going to work in a dead-end job while your dreams float away. Pure madness is staying in a loveless relationship when there may be the person of your dreams just around your corner. All of those things I mentioned make you a complete and total nutter.

Me—I just want to see if something I would like to do is past my limitations. I already know what I can do. I want to see what I cannot do. So, if you wish to compliment someone because they are doing something which seems either impossible or beyond what you think you can do, find a different word.  Or make one up. Or just tell them they are inspiring and you hope to someday chase down your own unattainable goal.

absolutely cant agree with you more. Love the paragraph about your definition of insanity, madness etc.
keep it up! You truly are an inspiration!!! ;)

Point taken, and I'm going to stop saying it to people. I'd never thought about this way, and I say it all the time, and I always mean it as a compliment and with the utmost respect for my friends who have taken on ultramarathon distances or run two on back-to-back days, both of which are things I'm not ready to take on.

It's funny, though. For runners, one year's "that's crazy. I'll never try that." is often one of the next years' goal.

Yes, I got the "you're nuts" from family when I decided to run a marathon. And the "you're crazy" when I said I'd do it again.

You said something here that's needed to be said for a long time, Dane. Bravo to you! In fact you have me thinking now, and it occurs to me that what's actually crazy is NOT running, NOT keeping fit, and NOT treating our bodies the way nature (and God) intended us to. Ya know what I mean, man?

So well said! I'm running my first marathon tomorrow (St. Jude) and I've been told at least 50 times that I'm crazy. Yes its hard and time consuming, but so worth it! Just wish others had the guts to do it and not make excuses. Thanks for reminding me why I do what I do.

I'm sick of the comments about when I turn older I'm going to have major knee problems. All the while these people have a gut bigger than my desk I sit behind.

I love this! I hear "crazy" all the time. Along with the high mileage running and lots of racing, try having 12 kids. Everyone thinks I am "crazy". Love this post. :)