Earlier in the year I was barely ahead of the least miles I have ever run in one calendar year (which was, ironically the year I ran 52 Marathons). I knew the reasons – travel, racing, and working all lowered the numbers.  My threshold for a successful year is 2,000 miles.  Not because it is arbitrary but because I have found if I am running around that many miles in a year, my results are best. When it appeared I was going to be in the 1800 mile range I didn’t fret.  But slowly a few things fell into place and with the last three weeks of December all being spent in my home (a rarity), the miles piled up. It wasn’t until this past weekend when I did my fake marathon run at Liberty Park that I realized that not only would I probably get 2,000 miles, I might actually get 2011 in 2011. 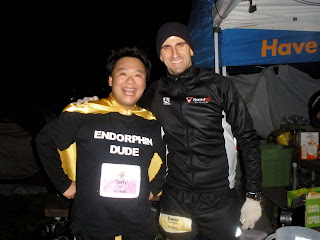 Then I also realized this was unnecessary.  I would already be upping my miles quite a bit this week and given that I had a fleeting bout with the beginnings of an injury just a few months ago, ramping up for the sake of hitting some milestone was pointless.  So I decided I would simply run what I was planning on running and if 2,000 was hit  - great! That said, barring an injury in the next three days, I will hit 2,000 miles somewhere on the Olympic Oval here in Salt Lake City early New Year’s Eve morning.
Two years ago, when a race got canceled on NYE I made up my own 6 hour run, doing 2 three hour loops of Liberty Park with a brief break in between each.  I did this to simulate what I would experience in the 202 mile run I was going to do just a few months later.  Last year I went to San Francisco and on a day where many seasoned ultrarunners ran well below their usual goals, was able to win the One Day Run with a total of 41.4 miles in 6 hours. 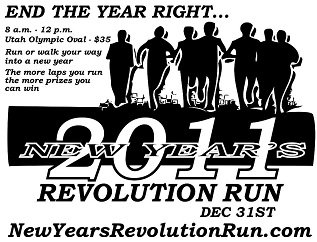 This year, I neither have to travel nor make up my own race as I will be running the New Year's Revolution Run. Supporting the Autism Council of Utah, running with old and soon-to-be-new friends as well, I am looking forward to another great ending to another great year. I will be shooting for about 30 miles, or 110 laps of the oval but the entire four hours will be just about having fun. hope to see many of you there!
Posted by Dane at 1:38 PM

Great meeting you at the track run today, Dane. Funny thing, my goal was also 2,000 miles for the year which I also hit today. Good times. I'm sure I'll see you around.

Great picture with Tony (AKA Endorphin Dude!) Keep up all the great running!