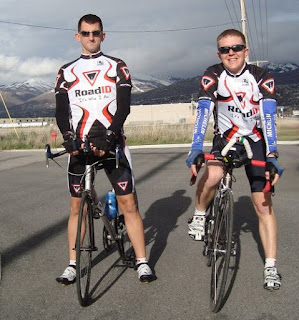 So I described my Christmas morning run last week and I can say it went off smashingly yesterday morning. Seventeen loops of Liberty Park with a jog there and back to give me a smidgen over 26.2 miles.

My friend Chris was kind enough to waste part of his holiday morning with me and helped me kick off the first four 1.5 mile-loops at a nice clip (12:28, 12:16, 11:53, 11:47).  Chris is mostly a cyclist who is trying to cycle all of the designated state routes in Utah.  You can read about his adventures here. He has, however, taken to enjoy running even more lately, so it was a pleasure to have him out there helping me get my butt moving.


We talked about how I hoped to see Henry, who is an older gentleman I see on occasion when I run in the mornings.  I talk about Henry, ironically, in this post about a run on Christmas morning two years ago. We had not seen him by the time Chris skedaddled to go home to his wife and celebrate the holiday but three loops later (11:38, 11:49, 11:53), there Henry was!  I saw him for the next few more loops before he went about his business once again. As certain family members of mine struggles with health issues it is a melancholy feeling I get seeing Henry, so vibrant and alive, out here all the time.  It will be a truly sad day when I don't see him anymore.

I saw more than a few runners out on this morning but a couple running together were out there for quite sometime.  They were running the opposite direction (who runs clockwise?! Weirdos.) and slightly slower than me so I got to see them pretty frequently.  They would sometimes stop, sometimes walk and sometimes utilize either the cedar chip trail or sidewalk.  I was very curious about what exactly they were out there looping around for but I am sure they were thinking the same thing of me.

My friend Darby showed up and did a few loops as well and it was nice to be able to see her.  A few other friendly faces popped in and out and I loved how so many people were taking advantage of a pretty darn nice running day.  The inversion (Utah pollution for those not in the know) wasn't too bad, the sun was shining and the temperature was in the high 20s or low 30s.


I saw I had an off chance to run virtually the exact same time as I had run last year (3:24:26) so I picked up the pace a touch on the last three loops (11:27, 11:24, 11:14).  It wasn't enough however and I ended up running just a hair off in 3:25:31.  I was pretty darn pleased. Kind of amazing to me how just running a minute or so off of pace per mile can make even 26 miles seem relatively easy.  Given the adventure I have coming up next April, this was definitely food for thought.

Here's hoping you all had a wonderful Christmas.
Posted by Dane at 11:07 AM

In it for the bling said...

There is a man I see running up "the hill" on Pershing Drive here whenever i take a certain route to work. I didn't see him for a little bit this year and worried about him. Same way you feel for Henry I imagine!