Prepping my Active at Altitude Camp

This past weekend I spent a glorious time in Estes Park, CO with Terry Chilpin, the owner of Active at Altitude camps.  As I mentioned in a posting in December, Terry and I are teaming together on a number of ventures this upcoming year and the first will be a camp in May in Estes Park.  With the camper list already half full, we felt it was time for me to get out to Estes Park and check out what we will be ding first-hand.  There is only so much a phone call and email can convey after all.

I had last been in Estes Park over 5.5 years ago running the Estes Park Marathon as one of my 52 for the year.  Little had changed and all the beauty of this town remained. Terry and I spent the better part of the day checking out the trails which were runnable and scoping out where exactly our camper would be running. I immediately remembered Lake Estes and how just a few short steps away from the finish of the marathon I was grateful to be surrounded by such a glorious spectacle.

On Saturday we spent some time in Boulder on what turned out to be a day about 20 degrees warmer than we expected it to be.  Running around the Boulder Reservoir, I was reminding of running a marathon here in 2009 and how I had come across Naoko Takahasi- the first female marathoner to even break 2:20.  As we headed back to Estes Park, we saw none other than Scott Jurek and his friend Walt on what was probably some random 50 miler they decided to do that day.  after a small chat, We were back to Terry's lodging to hash out even more details.

With Anita Ortiz already joining us to be a guest speaker, it was wonderful to confirm that Melody Fairchild would also be joining us as well.  both women would be on-hand to give their own rendition of what it is like to Refuse to Settle - the them of the camp. Those attending the camp are in for a real treat as both of these women have faced some amazing obstacles on their way to pushing themselves past their limits.   Having them at the camp will only go to sow what we all can do with out own talents, regardless of what they might be.

From the trails of Twin Owls to the paths lining Lily Lake, those at the camp are going to be in for a sensory overload of wonderful sights. Even though the camp is still over two months away, I am beyond excited for it to come. To be able to share these views and his own insights is what has pushed Terry to take on the challenge of opening his own camp to show others what is possible. When Terry and I joined a group of runners to test our lungs and legs on the sloping trails of Glen Haven, we were given even more wonderful views of what is in store.

From differing vies on how to fuel to styles which vary in training and life, Terry and I still had a completely wonderful week with his poor wife having to listen to two guys talk about running stories for a full weekend.  Before long, however, she too was even throwing in a few of her own and rekindling her love for running by joining us on our run.  as she powered up a particularly tough climb, we could both tell there was a fire burning in her which these mountains and environs will bring out of just about anyone.

Terry's success at his camps has come from taking a wonderful outlook on life and running and combining it with the desires of those who attend.  It is a pleasure to be working with him and the runners who join us on this journey will come out of this week as both better runners and people. What will be shared will be the culmination of countless hours of running, racing and ensconcing ourselves in the running world. However, Both Terry and I expect to be learning as well along the way. 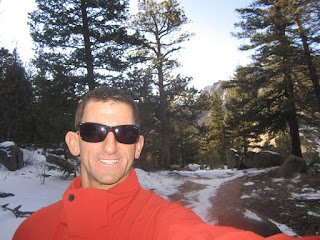 As the campers peel in from all corners of the country, with their own tales and stories, they come to this camp not because they are fast or slow or talented or fresh to the sport.  They come because refusing to settle is something which has ignited their thoughts. They are looking to go beyond what they have ever done before and do so in a lace that is as comfortable and inviting as possible.

That is why they are coming to Estes Park in May.  Come join them.
Posted by Dane at 7:54 PM

I am looking forward to meeting you, Terry and his wife in May. While I have a high energy level and unbeatable determination, I am so ready for the next level!

Being a Jersey shore girl, the mountains will be quite the challenge I need:)