Some complained about the cold. I relished in the fact that I might actually not be covered in sweat by the second mile of a race for the first time since I could even remember.  But I wasn't expecting it to be so darn dark.

I spent the day before the race participating in a group run at the Red Coyote Running and Fitness store in Oklahoma City. Serendipitously, I had met the owners of the store at a book signing five years ago in Southern California at another running store. Jon and Burke have since moved around (including a brief stay in Portland) until starting their own store which has received massive acclaim. A normal Thursday run was scheduled at the store but word got around to many more interested souls and the numbers swelled.  On an absolutely beautiful night, I got to see old friends like Olympic Trials Qualifier Camille Herron and make many new ones as well.  Running is such a small world we often shared the same friends without even knowing it.

The next day at the packet pickup, the beautiful weather from the day before turned into cold and rainy ugliness. As I said many times, water and paper products do not mix well so my book signing at this outdoor expo was short-lived.  I soon found myself out of the outdoors and trying to warm myself up with some hot cocoa. The next morning promised to be dry as a bone even if it was a bit chiller than most of those in the Sooner State seem to be prepared for. 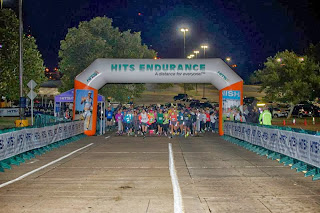 My host for the weekend, Katie, who won the Prairie Fire Marathon the previous weekend, had me down to the starting area far earlier than I prefer but since I prefer to be there about 10 seconds before the race starts, that is not saying much. Katie was doing the half marathon on this day and the marathon the next day.  I thought about doing the same until I remembered that I had no desire to do that.

What I found so stunning was how, even on this night/morning of a full moon, with the sky completely devoid of clouds, how absolutely pitch black it was just seconds before the starting gun went off at 7 a.m. I guess my Julbo sunglasses would just stay on my head until later in the race.

I knew this race was going to both start and end with a series of hills. Some complained about them which always befuddles me.  If you want to run a completely flat course, then go run it. No one is holding a gun to your head. When you sign up for a race with hills, well you know it has hills so start training for them. Having said that, I was definitely inwardly grumbling, especially when the race started by immediately going uphill.  At least it will end on a downhill, I thought.

Soon, all I could see was the one runner in front of me and no one else. As we made another climb up and over an overpass the road felt a little slippery. Remember those "Bridge Freezes Before Road" signs? Well, I now can unequivocally state it is very much true.  As I slip-slided my way across Route 235 I could only hope my Karhu racing flats would be able to keep me from ice skating to the other side.

The sun was finally peaking up over my shoulder and the inkiness went to pale darkness.

As we began a jog through a small neighborhood section I took a glance behind me and saw no one.  Up ahead I could see the one runner in front of me but he quickly slipped out of view. I asked one of the volunteers how close the next runner was behind me and he said  "I've read your book. Don't worry!"

I found that to be both flattering and entirely quizzical.

On another straightaway I ran past a couple out for a morning stroll with their dog. I nodded in polite conversation.  As I went by them the man asked me "What race is this?"  I have often been asked by spectators what race I am running or what mile this is or what pace am I going at and I am curious if they expect me to stop and have a chat. I am going to pretend I look so good that they don't realize I am not at conversation pace, especially with someone who is not yards behind me heading the opposite direction.

"Too far," was my only reply.  They laughed at least.

Luckily the next section took me under Route 235 so there was no slipperies to contend with.  A nice long stretch had me now seeing the runner in front of me and he was losing ground. Also, way in front of him I saw what was 3rd place.  I had little to no chance of catching him, I assumed.  But one only knows what can happen when they leg the distance.

Turning onto the 6th mile, the Capitol Building lay right down the street.  It was a fantastically beautiful morning.  I turned my head and looked at where I just came from and saw a runner like 30 yards behind.

The morning just got crappy and/or exciting.

As I could hear the clippity clop of shoes behind me closing the gap, I decided he was going to have to work for it. As our steps brought us to and then around the Capitol Building, some construction (or possibly the government shutdown?) had us rerouting around in an almost-obstacle course fashion. True to my word in my head, I kept the closing runner from passing me until mile 7. Then he slipped by. We exchanged pleasantries and then off he went.  But not far. 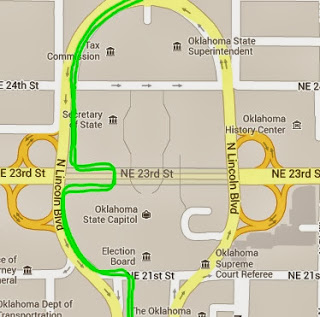 I kept him just a few yards in front of me and used his pacing to close the gap on the runner in front of us. Right about here the top runners began flying back.  The top two were locked in a battle separated by only a few yards. I threw some congratulatory words at them both and they looked at me all confused. Perhaps my lips were frozen a bit but I thought I was coherent.

The third place runner soon came at me and I knew it was not far until my own turn around.  At the 8th mile I made a rather uncomfortable 180 degree U-Turn and began to try and catch those in front of me.

The next two miles were about two things: saying Good Job to the runners behind me and making up ground on the runners in front of me. I did both in stellar fashion and right after the 10th mile saddled up to the two runners who were in tandem on the road and said, "So, is this going to be a 3 way tie for the worst finishing place in sports?"

One of the runners professed to not knowing what place we were in which was a little bit of runner gamesmanship/bullcrap. We all knew how many people had passed us heading home.  His name was Jonathan and he was actually running this as his last longest run before a marathon a few weeks later. Apparently he had already run 9 miles prior to the race start.  Impressive.

The other runner, Mark, was a young buck running only his second half marathon ever. The next mile was a mostly downhill one and we began to prepare ourselves for what we knew were basically two miles of up and down to finish.  I was curious how this would all play out as we headed toward the finish.

Right before what would be an unmercifully steep hill the course turned to the right through Woodland Park. I was beyond grateful for this detour and knew it cut out at least one big up and down. As I chatted with the guys, the talk of age crept in.  I rarely feel old until I realize the 1990s were two decades ago or that it has been more than a quarter of a century since the Bears won the Super Bowl. I am in good shape with a lucid mind so age is rarely a problem.  But when I realized I was 13 years older than Mark, that was just weird. I realized someone 13 years younger than him would be 11!  But Jonathan joked, that at age 33 that we were still wily and full of knowledge. We were full of something that is for sure. 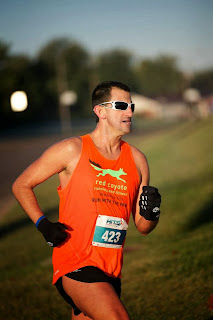 As we crested and flew down the last final hills, I commented that I liked them better in the dark where I couldn't see them.  I could see that if I ran miles well within my range that I could break sub-90 for the half.  As I began to pull away from both guys, I felt a twinge.  I was hoping they would come with me as I picked up the pace. Alas, I can only control my run so I pushed the hammer down.

As the last half mile was all downhill or flat I turned on the jets.  I separated from the guys behind me and looked at my watch.  My pace was fast and my time was good.  Then I noticed that my mile split for the last two miles had been less than up to par.  Problem was that it appeared the course was a bit long. Drats.  I could tell I was just going to miss 1:29.

I roared to the finish ( oh so much like Katy Perry) and notched a 4th place showing for my 72nd lifetime half marathon.  It also marked the 3rd time I have finished 4th overall in a 13.1 race. It truly is one of the worst places to finish in a race. That said, I was quite pleased with my effort. I was also the oldest guy in the top 7 which just feels weird to even say.

I thought the race was very well run as well.  Not exactly the most scenic course in the world but I rarely run races for their scenery.  Visuals are usually an afterthought with me.  The aid stations were well-manned and lots of course direction was given by volunteers and police officers to keep everyone going where they should. There are some changes I would make to utilize the immediate surroundings but there is always room for improvement. All told, I was pleased with how the race itself was run.

Now I have a little bit of a break as I don't race again for a few weeks when I head to Santa Barbara for another 13.1  In the interim I get to crew my best friend to her first 100 mile race this weekend.  That is going to be an adventure!