Even More Disclosure: if you know anything about me you will now I say it how it is.  So, if these shoes sucked, well, I might put it in the most diplomatic way possible, but I would tell you they suck.  Or I would probably not write a review. Fortunately, they far from suck. They are also resilient.  More on that in a bit.

(And if you stick around to the end of this review, I have a 15% off code for you to use! Erinomaista! That is Finnish for Excellent.  Or at least I think it is.)

I am a heel striker.  I won't say proudly because there is no pride in doing something which comes naturally. However, it is how I run and it has given me zero problems over 146 marathons and a few other running adventures. The Steady is a shoe built for those who strike as such so I thought I would give it a try. Granted it is engineered for everyday stability training and I am not one who normally needs a "stability" shoe, but it couldn't hurt to give it a go. 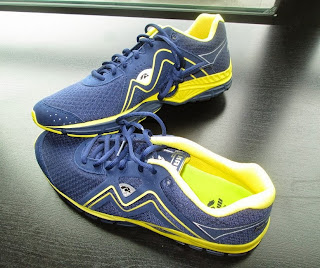 First run impressions were that it ran very smooth. In fact, even though a surprise rain shower soaked me and the shoes, they didn't feel that heavy.  Part of that has to do with the fact that they only run 8.9 ounces to begin with but another is the highly breathable mesh upper that really makes the shoe so much more airy. (Check out this video from my man Jordan for a quick tutorial on The Steady and The Fluid which I reviewed here.)

While, the Steady provides support through the medial midfoot for runners who require more guidance and may pronate a bit, I did not feel like it was pushing me over, even though I do not overpronate.  In fact, it was such a nice cushioned ride I couldn't believe the shoe weighed as little as it did.  I was eager to give them another run later on that day.  This first run had contained a few small rises, all on pavement for about 9 miles.  I planned on a shorter, faster run, some on it on dirt with twists and turns through nearby Laurelhurst Park in the evening. Then, my stupidity kicked in. 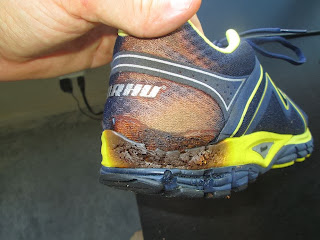 Now the question began, how can I possibly review a shoe that I have damaged.  One run is not nearly good enough to give ample feedback to people.  Then I realized that perhaps the damage was only cosmetic and the only way to find out was to give them a go. Well, I am unsure if it was my imagination but I think the damage went a little deeper than the surface.  It felt like I had definitely damaged the shoe. Then I had to stop at a stoplight which really bothers me for no rational reason and I lost my train of thought.  I then had to jump over an enormous puddle and around some branches strewn on the ground from the monsoon we have been having in Portland.

Next thing I knew I was in Laurelhurst Park.  I run this park when I want a nice safe and easy run where I can add one mile loops as I feel fit.  Since my Dane to Davenport ended I have run this repeatedly as I haven't had much pop in my legs.  Every time I have run it, however, I have run it faster than the previous time.  I could tell that I was going to be close to keeping that streak alive here so I really focused in on my stride, my arm swing, my breathing and where my feet were falling.

My Feet! They are in burnt shoes! I had absolutely forgotten about the shoes.  If I really concentrated I think I could feel where I had done the damage but maybe I was thinking too much.

So, I thought lets give them another run.  Obviously I do not want to run in shoes which are going to be harmful (because of my stupidity) so too many more runs would be counter-productive.  But a run up nearby Mt. Tabor, which would be completely different than either of the other two runs, would really give me more feedback. On a sidenote, I could not believe it had been nearly two months since I ran this route up Mt. Tabor (about a mile from my loft.) That gives you an idea of how much I travel, I guess.

The Steady performed admirably.  However, I did notice that they were a little less "grippy" than I would like to be but that could have been a combination of the fact that the pavement was slick from rain and that I only had about 18 miles on the treads. Perhaps I had not sufficiently scuffed them up yet.  Or maybe shoes are always a little slippy on wet pavement and I never cared when I wasn't being ultra-sensitive to how they fit and wore. 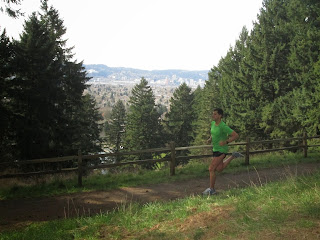 Will I make the Steady part of my must-have arsenal? Well, as I mentioned, I don't overpronate so the need for a shoe that helps correct that is not high on my list. I do, however, think they are a darn good shoe. I will also use them as part of my rotating Karhu collection as I begin my post-Dane to Davenport ramp-up in speed. Even with the burnt outside (chicks dig scars, right?) I think the shoes will suit me just fine.


In addition, as promised, if you use the code "SEEDANERUN" on Karhu's website, Karhu will automatically knock off 15% whopping percent from your purchase. Treat yourself today!