Well, at least not in the way most people think.

In the history of American road running there have been less than 20 men who have run under 2:10 for the marathon. However, in just one month, October of 2011, 32 men from one part of Kenya all went under that barrier.

I am not bemoaning that Americans are not as fast as other nations in the marathon because, for the most part, they actually are. I am trying to point out a large fallacy that not only non-runners (expected) but also runners (who should know better) continue to parrot. The fallacy is that Kenyans are all fast. In the vein that every square is a rhombus, but every rhombus is not a square, it is not Kenyans which dominate the running world.

It is one tribe. 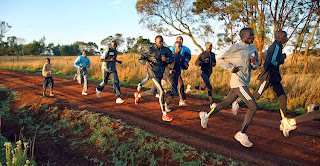 The 32 men I mentioned above all hail from the Kalenjin tribe. A minority tribe in Kenya, barely consisting of roughly 10% of the population, pumps out nearly every great marathoner runner of note these days.

Sunday's Chicago Marathon winner is from that tribe. The top 5 men and 3 of top 5 women at the Berlin Marathon two weeks ago were from that tribe. Basically, if you are winning any major marathon of note in today's age, you are from the Kalenjin tribe. I am not here to explain how this is possible or why it happens. In fact, few people can even credibly take a stab at its exact reason and they often disagree. (David Epstein's, The Sports Gene, which I have not had a chance to read yet, examines this tribe in particular.)

In my book, 138,336 Feet to Pure Bliss, I talk about how each decade or so one particular race or area of the world seems to be the best at running marathons and people retroactively try to say why. Explanations for the Finns, Korean, British, American and now African dominance always crop up after the fact. They all seem to be wrong. 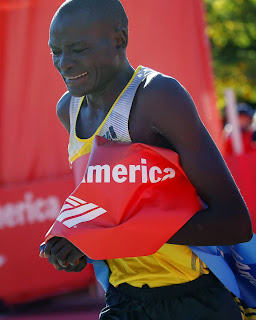 However, I find it irksome, and a bit racist, to hear from many that Kenyans win all the races. While the Sub-Saharan countries are indeed producing most of the guys standing the tallest on the podiums these days, it is far too dismissive to simply state the Kenyans are winning. Instead, we should be focusing on some of the amazing things these select few runners are doing.

For example, Chicago's winner, Dennis Kimetto ran a 2:03:45, breaking the previous record set last year of 2:04:38. That's almost an entire damn minute! And oh yeah, he really didn't start running until 2010, spending all his time as a farmer, tending corn and cattle in Kenya. His time was the 4th fastest time ever run on a record-eligible course.

Now, it would be wonderful if we knew why this is happening and it is great for the sport to debate the reasons. However, chances are great that the reason many never been known for certain and within the next few years perhaps the Mexicans or the French or the Pacific Islanders will become the dominant race at the races.

In the meantime, I think it is time to change those running shirts to say:  "In my dreams, I am a Kalenjin."
Posted by Dane at 11:19 AM

Good comments Dane.
Your analogy of the square and the rhombus is a good one.
I had not thought of it that way.

Great article.
Kalenjin translates roughly as "I tell you."
Not sure where or what that means but "I tell you them people fast."

Our human ancestors, for whatever reason, evolved to run long distances some 2 million years ago, in that part of the world, not coincidentally. Today, we still retain some of the characteristics of an endurance/distance-running creature: upright posture, springy tendons, an extra neck ligament, about 15 sweat glands per square inch of skin,etc. But as humanity grew smarter, it got slower. I think that the East African runners retain more of those distance running genes more than any other group of people on Earth today.

But as humanity grew smarter, it got slower. I think that the East African runners retain more of those distance running genes more than any other group of people on Earth today.
Sandu, is this a backwards way of saying that East Africans are not smart? Just teasing! Good point about the genes, but honestly who will ever know? Think about all of the american runners training in Kenya now? It's not just for the elevation, I also believe that its to train with a wealth of faster runners that will push them.