An Updated Look at Cross-Training

The following is an older post I decided to update with some additions at the end:

I am often asked how much, if any, cross-training I do in my normal routine. For the past few years, the answer was easy: slim to none.

During my 52 Marathons in 2006, I went to the gym a total of two2 times. The entire year. I was deathly afraid of an overuse injury from the gym that I simply did not go. I mean, there were other things keeping me busy that year as well but the fear of of derailing an entire year's worth of marathons by pulling a hammy doing squats kept me out of the gym. Obviously, I could have found ways to minimalize injury but I just decided avoidance was best. 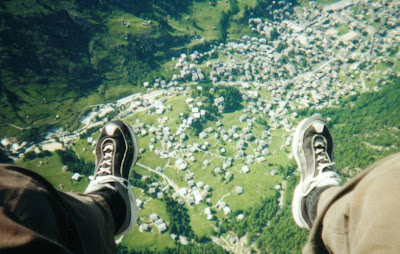 In the past few years I have tried fitting in some other activities here and there but mostly, when I want to exercise, I go for a run. It is just so damn easy and convenient. Put on the shoes and go. Sure, I do some trail running here and there, which to some extent is a type of cross-training but other sports and activities have had to be pushed to the backburner. This has become increasingly true as I now make a living as a runner (so to speak.) When your paycheck relies on your legs, you can't go will-nilly repelling down a cliff or go paragliding on a whim. ( I miss those days.) 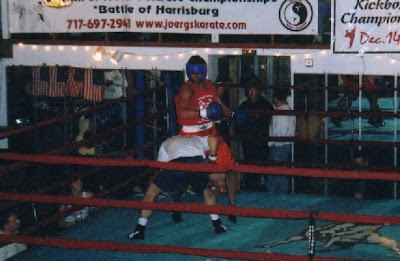 Even when I have tried to incorporate some of my old lifestyle (pre-running) back into my current life, I have met with some resistance. For example, I tried to get back into boxing last summer but after just one workout where I too quickly tried to start hitting the heavy bag, I was left with some serious aches and pains that made me swear it off for a while. I know the reason: I had simply come back too fast and too hard. But by the time I had healed I was back into my running routine. No more boxing that summer. Too bad. I have a mean hook.

However, this summer is different I have the USAT National Aquathlon Championships rapidly approaching on August 2nd. and while I was able to win my first and only triathlon on basically no prior swimming at all (report here.) I cannot possibly think I can race at this level just on muscle memory and skills learned 15 years ago. 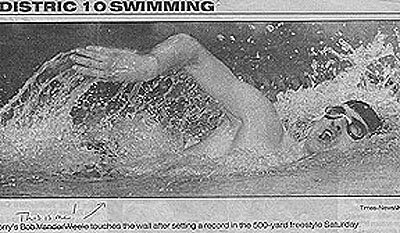 So back into the pool I have gone. More so than any other sport I have played, it is amazing how quickly you can lose swimming shape. Fortunately, I have been keeping in good shape for the past few years and that I have always been pretty natural as a swimmer. Although I recently was reminded how awful my form was, even in my prime, when my high school swim coach for my senior year found me on facebook and teased me about it. Of course, he then wrote back "But you kept winning. Was hard to get you to change!" And apparently, I raced like Pre in the pool, even if I don't on the track. For example, in districts my senior year, I went out like a bat out of hell and even though I was seeded 5th, was able to make the eventual champion chase me down and beat me but both of us broke the previous district record in doing so. 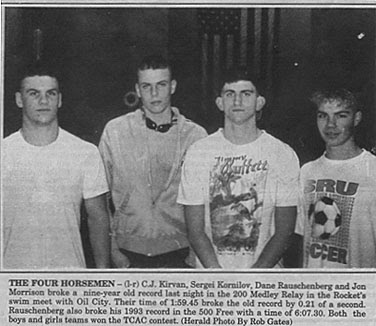 Which brings me back to the chlorinated track, so to speak. This would mark my 5th workout in about 3 weeks in the pool. While the first few were all about getting my sea legs in me. I felt I could push it a little harder today. Still (surprisingly) reeling from my hill workout yesterday I was feeling a little pain in my left abdominal region and my back. Hoping it is just the hill workout and subsequent ab workout after it I still played it smart and dialed down the intensity.

That said, I was quite pleased to go out and do 5 x 500 yard swims on 7:04, 7:13, 7:04, 7:08 and 6:56 with about 30 seconds rest in between each one. For the runners reading this, that probably means squat. For the swimmers, they probably are thinking "And you call yourself a swimmer?!" But I will have to beg a little forgiveness as I get back into the pool mode.

I at least have done a low 5 minute 500 yard at one time. Sure it was 16 years ago but i felt this was a step in the right direction. And when I don't feel like I could have run 5 miles worth a damn today I was glad to know I could still get a pretty intense workout in the pool and rest my weary legs (because Lord know I never kick, right Coach Ague?)

Besides, how am I supposed to take advice from a guy who let me wear a Jimmy Buffet t-shirt for a photo-op?

And hey CJ and Jon. Remember how we revered the guys as gods whose 9-year-old record we broke? Well, we have now held it for nearly twice as long. Now go get in the pool, both of you. I have no doubt your strokes are as deteriorated as mine!

I wrote the above over four years ago. Since that time I have had two bad bike crashes messing up both shoulders (2009 and 2012). I have tried to take my cross-training to different directions but I always come back to running.  Even when I cycled a bit to compete in a couple of Ironman 70.3s, it was barely more than a handful of times. While I have gotten to the pool more frequently, it is still a bit of a hassle.  Running is just so much easier to go and do.

However, as I have finished running a few of my more challenging long-distance running adventures including the solo running of the American Odyssey 202 mile race, the 350 mile run along the coast of Oregon and this Fall's Dane to Davenport, I have decided to once again try to supplement my running. November will be, I am guessing, the least amount of miles I have run in six months. I have once again started going to the pool and once again been boxing. I even have gone to the gym in what has to be the first time in five years.  My legs had been giving me some problems that I don't think running alone was going to fix.  So I decided to try something new to make them better.

That's just it about exercise and life. You never know it all and when you think you do, something changes. I am always learning and experimenting. I do stand by my feeling I have held for a long time that the best way to become a better runner is to run better. Seems simple but it is true.  Now, sometimes, "running better" means to take time off from running. Rest, recover, get stronger. Sometimes it means to charge full-force into the breach.  It is a constant give and take. Like life.

Anyone who tells you they have all the answers about how to get better is simply trying to sell you something. Don't buy it. I have run 146 marathons in my life and I know I do not know everything.  But I do know I am always doing what I can to figure out what works best for me.

This is an awesome entry! I am now a total believer in the stick to your training of running and stay out of the gym. Especially since I am ending my year marathonless & injured from too much gym:(

Anyways Dane awesome entry and you're doing a great job!