Terrible Boston Marathon Halloween Costume (and Getting Over It)

In case you missed it, Alicia Ann Lynch dressed up as a wounded Boston Marathon runner. Tasteless and tacky. Then "the internet" attacked her en force in a way that should be reserved for people who have actually done pretty heinous things. They sent her and her family death threats. They found nude pictures of her and posted them online. The vitriol got so bad that she apparently lost her job over the incident and deactivated all her social media accounts before pleading with people to leave her family out of it and let her take the heat. 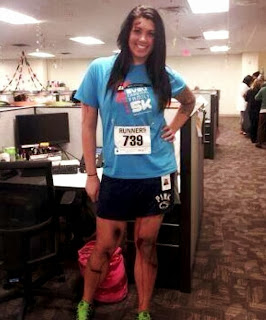 Here's the thing about being young and dumb - it's allowed.  In fact, every one of us were both at one point and many are still the latter. Raise your hand if you haven't done something probably considered tasteless and stupid once in your life. I am guessing few if any of you have probably moved your hand from the mouse or keypad.

But being young and dumb doesn't give others the right to do many of the things listed above in an act of supposed retaliation. Believe me, as a human with compassion, I was definitely taken aback by the hubris of the girl.  As a runner, I thought about tweeting something along the lines of "You are an idiot." I was very affected by the attacks at the Boston Marathon as I penned in a post that even Boston Magazine picked up. However, I am more affected by the stupidity and heinous acts of members of our own Congress. You know, people who can shape legislation? People who are not 22 years old and are supposed to have out best interests at heart and seem to rarely do so.

Yet in spite of my feelings about the stupidity of Ms Lynch's costume I would have never thought about going to lengths many did in trying to "shame" her.  In fact, I have often felt that "shaming" is one of those terms which is so overused these days (like "bullying") that it is on the verge of having no meaning anymore. Having said that, when you send death threats, post private information and generally try to mess with someone's life, that is an actionable offense. (I know. I have dealt with a couple of idiots who feel their "anonymity" is protecting them when they have tried to say lies about me. Guess what?  It won't.)

These internet vigilantes think the have done some service when that is hardly the case. They will go back to their lives the next day and not even care about the carnage they left behind them. It is one thing to call the person a racist or tacky person or anything else on the lines of free speech. But to actually try to cause irreparable harm to a person and their reputation is pure lunacy. In fact, as I mentioned, while Ms. Lynch was stupid, she did nothing illegal. Those retaliating against her have indeed. The thing about free speech is that when you protect it, you protect it most for the people who have polar opposite viewpoints (Yes, even the racist, ignorant, slovenly, slack-jawed bigot of a mother who dressed her 7 year old as a member of the KKK.)

More so, if the incident she unwisely chose to mock has shown us anything, it is that violent, angry responses are exactly what caused the bombing in the first place and they are not the answer. Fortunately for Ms. Lynch, the rapid speed with which news is digested in today's world will mean she is a forgotten sidenote by next week. Hopefully she can learn a little about what to do in the future. But moreover, hopefully others will learn that their reactions were far worse and did zero to solve the problem.
Posted by Dane at 11:07 AM

I will try this agian, I said that this is how I feel, only you said it much better than every could. Thanks