OK, you wrote an Op-Ed for the Wall Street Journal (online). Get over it.

In case you missed it, the apparently (and unsurprisingly jowly), Chad Stafko, wrote an article about runners getting over themselves.  I saw it and immediately knew runners would (mostly rightfully) get upset upon reading the piece. But I wanted to read it with an open mind and see if he had any valid points.  I looked hard and I found a few. 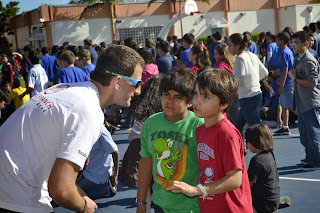 Without a doubt, there are runners out there who run specifically to get attention.  They want the medals and the accolades and the facebook pictures to post. Granted, they are far outnumbered by those who do not seek to only run for attention and not the other way around as Mr. Stafko tries to concede in his “OK, I know, this isn't the case for all runners” ending.

But here’s the thing, Mr. Stafko.  Let’s say that these people are only about getting attention through running. They somehow need to be reaffirmed by their friends and family because of some need or desire to feel like they have achieved.  Let’s say this is the one and only reason they are out there running. The ONLY thing they want is that bumper sticker to show off their running prowess.  In this scenario I am taking your diatribe and amplifying it to the nth degree. There can be nothing else in their intentions except the wanton need for the pat on the back. To which, I say, so?

What a splendid way to be narcissistic! Bettering their own health by being active. Lowering the cost of health care by doing their part not to be sick. Taking up less space and consuming less natural resources by exercising solely by locomotion. And that is the WORST case scenario! 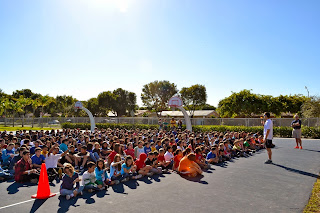 What is a slightly better case scenario? Maybe these people are overcoming an addiction and this is how they deal with those cravings.  Maybe they are trying to put behind them the loss of a loved one and this is the way they cope. Perhaps they are trying to inspire others to chase their own dreams and leave behind the naysayers who don’t believe they can do things on their own.

You ask “Why would someone want to get up at 5 a.m. and run 10 miles adorned with fluorescent tape to avoid being struck by someone who has the good sense to use a car for a 10-mile journey?” which misses the point on so many levels.
1.    I hate getting up at 5 a.m. to go for a run. I avoid it at all costs. I run in the afternoon or the evening.  Or whenever.
2.    Nevertheless, some people have to run then as that is when they can fit it into their life with a job, children, etc.
3.    Regardless of what time they are running it is not to get from Point A to Point B in the quickest way possible or they would take the car. Instead, the “journey” has a multitude of actual reasons other than traversing the distance.

Look, obviously, I like running.  But I didn’t always. Football is my favorite sport.  I boxed Golden Gloves.  I played rugby in college. You know, all those real man sports. Then I begrudgingly took up running.  Didn’t like it right away. Actually, I loathed it. Then I realized how freeing and wonderful it is.  I found a niche.  I travelled the world.  And now I get to use my sport to better people directly and indirectly. 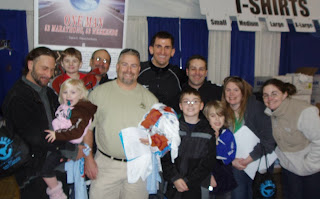 You say it is easy to spot the runners? Perhaps. They are often the ones with grey hair and wrinkled skin from years of exploring the world outdoors. They are the heavy ones who used to be much heavier.  They are the thin ones, the muscular ones, the old and the young, the people who are living life vicariously through themselves. In other words, they are everyone.

Here’s the thing: the only thing runners really need to get over is the next hill. Come join us, Chad.
Posted by Dane at 1:12 PM

Love it! I wanted to rebut! Couldn't have done a better job!

This guy deserves no response. Let his useless ignorant column go on being ignored rather than propping up his readership with runners ...this is why they pay him. Ignore him and they will not.

Nice work. Couldn't have said it better myself.

Well said, Dane. I admit the array of ultra stickers on my car does satisfy my ego. But it also signifies the tremendous distance I've come from the man that I used to be.
To be less reserved than you, get off of your fat arse and do something other than telling us that are doing something to get over ourselves

Love your response...I started running for my health and my sanity after my 19 year marriage ended and I started rebuilding a better life! I found Team in Training and it changed my life. I run slow, but I run. I set a goal and achieve it. There is no better feeling in the world than the pride of reaching a goal. Running makes me feel like I can do anything :)

I am a cancer survivor running for my life! I had to lose weight and other sports are just not possible given my coordination!

Running frees me. I have a long life now!

THANK YOU FOR YOUR COMMENTS!

I run because I can! And celebrate my life with every step I take, on the trails, sidewalks, bike paths. Chad, you'll never get it. Don't try. But don't judge others based on your flawed observations and beliefs.

And yes I talk about my running. Because it helps me deal with depression, migraines, stress. Because I lost over 50lbs doing it. Because with my running I helped raise over $4000 to send to Somalia to help those in need.

Glad I'm not the only one responding! I think the end result is that runners are actually more comfortable talking about running and wearing their race shirts (heaven forbid) out in public... because no one wants to be grouped in with Stafko after this backlash!

Here's my response - it was recently translated into french and quoted by Slate.fr - guess we're not the only country fired up about running!

Dear Chad Stafko: OK, We're happy to be runners. Get over it.

Thank you for this! When I read his piece, I didn't think Mr. Stafko was a jerk. I thought he was a hack. He wrote an article with a contrarian position about a popular subject to get a lot of readers.

Awesome work! I got a kick out of this and agree 100%. Your opening line was the best. Danerunsalot 1, Mr. Stafko 0.

This is a sad commentary about running pride and it is clearly seated in jealousy or envy. I feel sorry for him in that he could not find something more newsworthy to write about. Plenty of great material out there....

Clearly this guy is resentful and jealous of people who can set goals and achieve them.AND he TOTALLY does not get the running community at all. We runners support each other!

Good! I like the "living vicariously through myself" quip. I'll never be a Giants quarter back nor a Steelers tackle, nor a Red Sox picture. But by the grace of God, I can be a runner.

Thanks, Dan! I'll see you out and about when running. I'll be wearing some sort of shirt proclaiming a past running achievement so that you'll be able to recognize me.

18 years ago I was a homeless drunk, a Junkie addicted to heroine, and a crack head living in the streets of NYC eating out of garbage cans. I got sober in 1995 and i started running. I could not even run around the block. This year I have completed 2 marathons and I will be doing another in February. I don't round for a pat on the back I run because it makes me feel alive. I find a spiritual connection with a much greater power than me when I am running. I never have to make excuses for who I am or what I do because I should have been dead a long time ago but today I am 53 years old, I am sober , and I am a runner.

My only response to Chad is that he sounds like an overweight guy that is feeling guilty about not being more active. Come join us chad, and start feeling better about yourself.