Something has been happening over the past few years and its frequency is growing. Blame social media, or political correctness, or the theory that everyone is gorgeous and wonderful all the time for no reason at all.  But it is a backlash against health. I have decided to call it “Fit-Shaming”.

I touched on it in my article “Running Will Kill You” but I wanted to expound upon it here. Basically, I am a bit tired of the assertion that choosing to be fit and then sharing their feelings is somehow a bad thing. On top of seeing it happen all the time on the internet or in other media, I have actually experienced this firsthand.  I almost have to apologize for making the decisions that get me to where I am today. To illustrate this point, I almost decided not to post this article after I wrote it as I feared reading the backlash from people who didn’t get the point. Then I saw a Yale student, perfectly healthy, albeit very small, was forced to eat and weigh in each day in order to not be expelled. I decided I needed to go ahead and post the article.


I know this complaint of being fit will be compared to people of privilege complaining about having too much gold bullion but the mere fact I feel bad about complaining about it shows what sort of problem there is. Do not get me wrong - I know we place a great deal of emphasis on being youthful, healthy, good-looking and fit. Denying that would be ridiculous. It is also good that we as a society seem to be more accepting of differing body types and have a firmer grasp on reality. But the pendulum has swung too far the wrong direction to try and correct for standards which may have been a bit unobtainable. 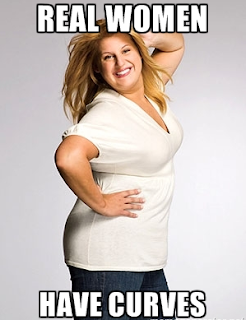 Just as those of us in the running world have seen the minimalist shoes and five-fingered frames (stupidest name ever; you know we have toes not fingers on our feet, right?) swing back and go into the realm of moonbooty Hokas, we now have gone from vilifying obesity to almost celebrating it. If it is not one article from Huffington Post it is a video from Upworthy talking about what “real” women are like or how “authentic” certain bodies are (this link is NSFW). Dove Soap has a campaign celebrating bodies of women who aren’t in the best of shape but again it talks about “realness.” All those bodies are real. Every single one. Not just the ones who are unfit.
A conversation with friends about this subject had some touting the usual party line in this debate. Societal standards say women have to be one way. The media is to blame for making us feel fat or unpretty. Photoshop has taken over what women “really” look like.
Here is the problem with each of those statements.

1. Society definitely does not say women have to be one way. In fact, if anything, society (in America at least) celebrates how women can be many different sizes and shapes. (And for the purposes of this article, I am focusing mostly on women and body issues which can be placed upon them. I am not ignoring men’s issues but realize that for the time being, these articles are predominantly speaking about women.) Is our society perfect with no pressure on women to be super fit? No. Is it much, much, MUCH better than it used to be? Yes.

2. If the media is to blame for making you feel fat, then turn off that media. Someone stated how they had to fight the media to make their daughter not feel fat or unwanted. Well, that person should teach their daughter to feel fit and not rely on those who do not know her to set her definitions (Also, one should probably only do this if the daughter actually is fit.) Educate her. Give her strength to fight back and love her body. To paraphrase Louis C.K. when he said someone there shouldn’t be gay marriage because “What would I tell my kids?”, don’t put it on the media to form your children's opinion of themselves because you don’t want to have a talk with your kid and raise them the right way.

3. Finally, cool it with the complaining about airbrushing and photoshop. We all pretty much assume those covers are touched up. And if you think there should be no touching up of photos, then don’t wear make-up, don’t comb your hair, throw away the spanx and don’t wear black because you know it is slimming. There is nothing wrong with putting our best foot forward in trying to look presentable. There is a great deal right with not trying to cover up something in an attempt to pretend it doesn't exist.

What bothers me most about these campaigns is that they actually do more harm than good. Why should one group of people (those who are fit and take care of themselves) feel bad about these decisions because another group (those who don’t) may have been made to feel bad about how they are? How about we just don’t make anyone feel bad about what they are doing unless it is harmful? Being too thin is just as bad as being too fat. Not running enough is probably as bad as running too much. Being/doing/having too much of anything is usual on par with the same on the other side of the scale. Shaming those who make a concerted effort to be fit doesn’t help the plight of those who don’t. It just creates a safety band-aid.

You may recall the 'Hot Facebook Mom' Maria Kang who started off a firestorm. I loved her statement. She wasn’t touting any product or food. She was just stating that there are often people who use anything as an excuse to not do something else. She says the photo was not photoshopped but was “airbrushed”. In a second photo you can see she has stretch marks. She is just as “real” as any other woman. But because she dared to come down on the wrong side of the “every woman is a goddess!” fence she received a healthy dose of criticism.

Look, the problem we have in this country is complex. I would like to believe it is simply a Calories in, Calories Out thing but it is multi-tiered. As I am relatively fit, I don’t get the benefit of the doubt that I know what it is like to NOT be relatively fit. However, I do understand that as I have definitely had times in my life where I was no where close to being fit. I also know how hard I have to work to JUST be THIS relatively fit. As such, I get it is hard work to eat right, exercise properly, and fit it all into your daily life. It is not easy. We wish it was. That is why we settle for lap band surgery, fall prey to every diet that comes along on infomercials, and do virtually everything but actually eating right and exercising properly.

I know what “real” women look like. I see them every day. Some are fat, some are obese, some are thin, some are fit, and some look so pristinely perfect they look like they were airbrushed in real life. I see these women in many settings. Mostly I see them at races where they are working on bettering themselves in one way or another.

We live in a different world today where the “average” person does the formally unthinkable. We have people supporting each other in amazing ways. We absolutely do not need to waste any time making those who are fit feel ashamed for being that way. And to be absolutely clear, we shouldn't make those who are average or a little overweight feel bad about themselves, either. But with the enormous cost of obesity we have, those who are doing what they can to be fit should be applauded. This does not take the applause away from those who are not as fit. There is not a finite amount of applause to go around.

That said, we definitely should hold the applause for those who actively chose not to be fit. Because it hurts us all in the end.

Thank you. Just...thank you...
I eat quinoa and brussell sprouts, while my coworkers are on their second fast food meal of the day. I work out on my lunch break instead of nap. I leave functions early for a race or yoga class. And always get hell for it.

Who is making you feel bad about being fit? If you feel good about it then why does is matter what others think? Take your own advice and ignore the media and the opinions of others. We are all on our own paths. Enjoy your path and let others enjoy (or not enjoy) theirs.

That last paragraph? That clinches it.
Maybe I'm just feeling it a bit more though, since I just had to argue with two people who have traditionally spent far less time trying to be fit that being injured is not a cosmic message that I should stop trying to stay "as" fit and active.

I ran into this in my first full-time job after college. "Oh, you go ahead and starve yourself, I'm done with all that ridiculousness."

Nevermind that I just mowed down a pizza last night, if I'm not overweight I MUST BE EATING ONLY RABBIT FOOD!

Oh...don't get me started on this. I'm fit- sorta. Living in a community heavily populated by professional elite triathletes, it's easy for me to feel completely flabby when being lapped and lapped by the pros in the pool or on the run course, but...when I leave this community I am shocked at how big people in general are. Spent a recent weekend walking around San Francisco with a friend. At the end of one day I remarked that I felt "grimy" and he responded, "well, you've been exercising all day." Just about choked on my ice cream...walking...not really exercise. I'm even told by other runners that "I exercise too much" (I work with a coach, so I can't really exercise TOO much, I just do what's on the paper" It's all because they feel uncomfortable being SO dedicatedly unfit in front of a person who is fit. Kind of like how awkward some people get if they offer you a drink and you decline- suddenly they think you are judging their alcohol habits, when really...frankly, you just didn't want a drink.

You're absolutely right! Good on you for calling out those who put exercise and good food down just because they don't want to be disciplined.

Dane, you are right on. Keep on with what you do so well! Your piece today resonates especially with some of us old geezers who are not Olympic competitors, but still keep in shape as best we can. THANK YOU!