Meb's scintillating victory at the Boston Marathon yesterday was enough to make many get a little teary eyed.  Of course, living in the internet age, I heard conspiracy theories about how the race was rigged to let Meb win and the ever-popular "Meb isn't really American." We heard the latter back when Meb won NYC Marathon in 2009. I thought perhaps we had evolved as a society since then but it appears in some circles we have not. As such, I felt I would find the excerpt from my book 138, 336 Feet to Pure Bliss which actually talks about this exact subject.

***********
Many were predicting an American would win New York in 2009.  However, use of the term “American” was almost always a not-so-veiled code word for Ryan Hall.  Hall had won the Olympic Trials handily, had paid his due on the international circuit and seemed poised to take over the mantle as the next great threat to breaking the Kenyan running monopoly on top of the leader boards.  So, when Eritrean-born naturalized US citizen Meb Keflezighi won the race, setting a personal best at the same time, it was a shock to many.  Meb’s win was not a surprise because he was unknown to the running community but rather because of his rather disappointing racing results for the previous two years.  Starting at those same Olympic Trials in 2007 that really put Hall on the map, where a hip injury bothered him all the way to a 2:15:09 eighth-place finish, Meb had done very little to instill confidence he would ever be near the top of his game again.  Until this fateful day ending in Central Park in Manhattan, that is.

Meb’s win became both a day of pride for Americans as well as one which lit up discussions about what exactly an “American” was. Leave it to New York to add to its already long-list of historical race finishes a social, economic, and racial discussion which was long overdue. 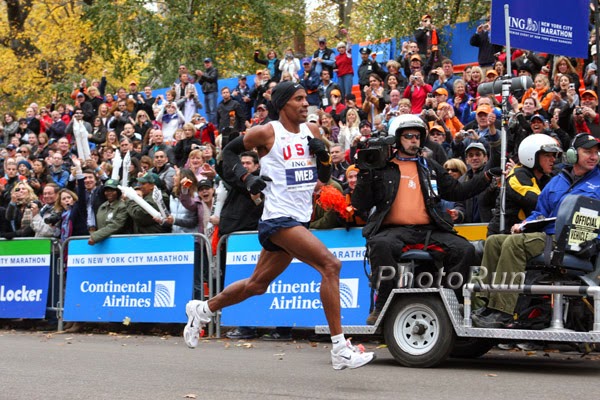 During the race, instead of the usual sponsor splashed across his chest, Meb was wearing a singlet showing the country he is a citizen of: the United States of America. As the first American to win the race, male or female, since 1982, it seemed almost surreal that Meb chose to wear his Team USA shirt for this—his first victory ever in a major marathon.

However, the immediate discussion popping up in newspapers and around the Internet was that Meb was not a “real” American. Also, his victory was no indication of U.S. distance running being on the rise for that same reason—he was not American. The problem with this is that arguments of this nature are blatantly incorrect on their face incorrect simply because they mix the issues.

During my travels I once had a discussion with two American runners. However, I was the only one in the discussion who was actually born in the United States. Talking about a myriad of running topics, we gravitated toward Meb and his victory as it has just happened a few months prior. We were almost in complete agreement about most of the underlying issues.

-American long distance running, while having been in quite a swoon for a very long time, seems to be rebounding.

-Whether they would admit it or not, some were hoping that the aforementioned “American distance running” champion would have far paler skin than Meb.

Without delving too deep into the underlying racial issues here, it was clear to see that part of the problem was not only that Meb was not born in the U.S., but his victory did not exactly signal the beginning of the return to American-born preeminence in distance running. This was where the confusion in the question lies.
First and foremost, Meb is 100-percent American. Any argument otherwise is ignorant of U.S. law. He is a citizen of the United States, and unlike many of those who just happened to be lucky enough to be born within the borders of this country, he actually had to take a test for that privilege. Meb’s citizenship is an indisputable fact.

However, the question about the origin of the dominance of African-born distance running remains. Whether it is genetics, the nature of the lives of those runners (high-altitude training and living, lack of modern conveniences which make running a “way out”, etc.) or something else, Africans are currently cleaning house in distance events world-wide. Therefore, to those who refuse to admit surprise, Meb’s victory is not all that impressive.  In fact, by their view it is just another victory for the “African” distance runner. To discount Meb’s heritage as a contributing factor to his success would be to do so at the risk of great folly but to discount his upbringing would do the same.  And this is where the real issue lies.  Basically, is the American distance running system creating the right environment for Americans, either natural born or naturalized, to succeed on the world scene? The U.S. has been fortunate lately to have great success amongst its natural-born citizens like Hall and Dathan Ritzenhein, but Meb’s victory at New York is also a victory for the system itself. You see, genetics play a large part in success of an athlete but are not the complete puzzle. Training, attitude, and coaching make up far larger portions than many give them credit.
Meb’s victory in New York came long after he had moved to America and lived and trained within an American system.

His victory was just as much a victory for the American distance running program (and his own hard work) as it was for his genetics. Americans might not be ready to dominate the sport just yet, but the future looks bright indeed. The pieces are in place and they fit together well, regardless of the different shades of color that they are painted.
Posted by Dane at 1:01 PM