I began a partnership with CamelBak last month after many years of wearing and using their products.  As a continued public service I am reviewing some of their products for you, the runner, so you don't have to try them out for yourself without any firsthand knowledge. This review will be about two seemingly simply products but ones most people will use most often: the handhelds. 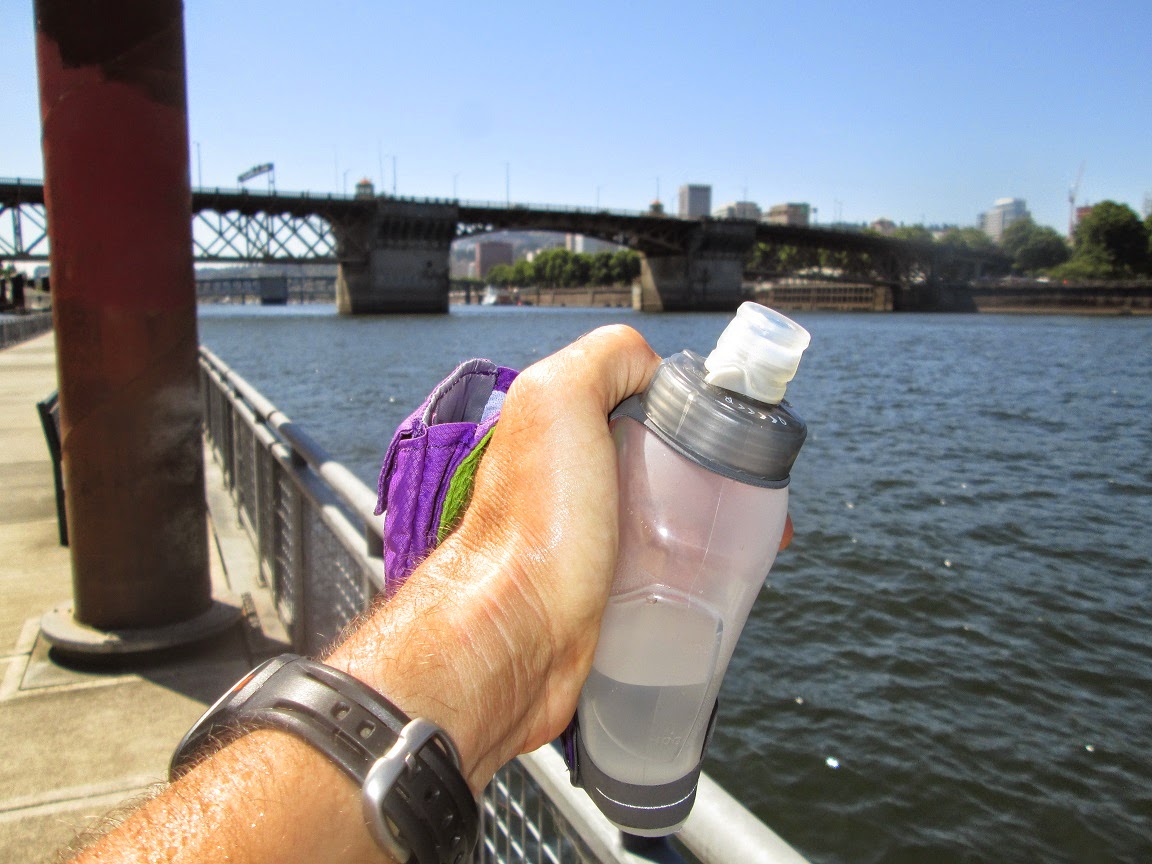 I had experienced a variety of different handhelds over the years, even though I (as I mentioned in my review of the CamelBak Marathoner vest) for the most part hate to carry anything when I run. I'd rather push through 90 minutes in the hot sun with no water than carry anything with me. I am lazy. But I know that is not wise, especially when the temps get pretty darn warm or if you are going to be in an unfamiliar place with no access to water. The latter rarely happens for me but the former hit home when the temperature broke 100 degrees in Portland the other day. I thought this would be the perfect opportunity to test out the CamelBak Arc Quick Grip.

Out and about on the Portland waterfront I took the 10 ounce bottle. It is super lightweight (.35 oz) with two separate pockets. The first has a Velcro flap so you could store the more important items in there. The second, closer to the hand, is open and allows for easier access for things like a PowerBar Gel or some  Shurky Jurky. The curvature of the bottle fit nicely into either hand and I tried switching it back and forth to see if there was any noticeable difference. I felt none. The stretch binding held tight to the bottle and did not slip off the end like some other ergonomic bottles. While I didn't need it on this sunny daytime run, it was also fitted with reflective tape. It was simple and effective, topped with the awesome CamelBak jet nozzle. Love that thing.

With only a 10 ounce capacity, you aren't going to run across Death Valley with the Arc but it is perfect for a mid-distance run in warm weather. The lightweight nature of the bottle means it is thin and doesn't keep water as cold as you would like for as long as you would like. Then again, my test run was in 100 degrees, so take that as you may. The liquid inside stayed cool for about 45 minutes before I could tell my body heat and the sun totally cooked it.  So, not too shabby at all. 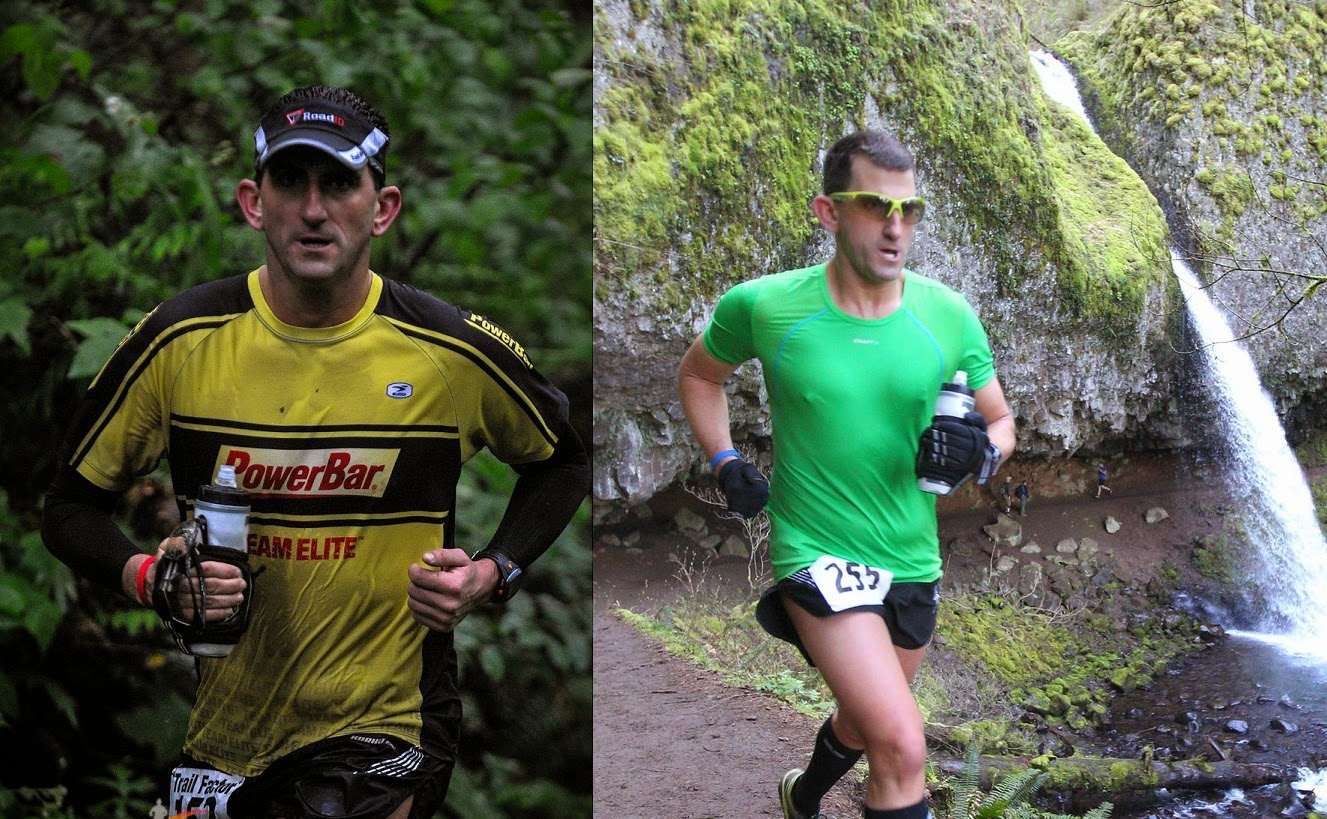 The Quick Grip however, is a freaking marvel. It is insulated so it keeps your drink colder much longer than a normal bottle. In additional it carries a whopping 21 ounces of liquid which will be more than enough to get you through a tough 20 miler.  I have worn the Quick Grip in numerous races that required runners to carry their own supplies and have never been disappointed.

Even though it is indeed larger than most handhelds, and as such is a little longer, it never felt bulky or cumbersome.  For a 6'1'' guy I have tiny hands so I thought perhaps it might feel a little overwhelming.  That wasn't the case. Even when my hand would get a little tired for me to clasp the bottle, or perhaps the liquid got light and made it feel like it was jostling a bit, a quick tug on the strap held the bottle firmly in place. The strap also has a cool little function that keeps it from flapping around when there is excess at the end. (I am not exactly sure how it is done but the guys reviewing it in this video make mention of it as well.) 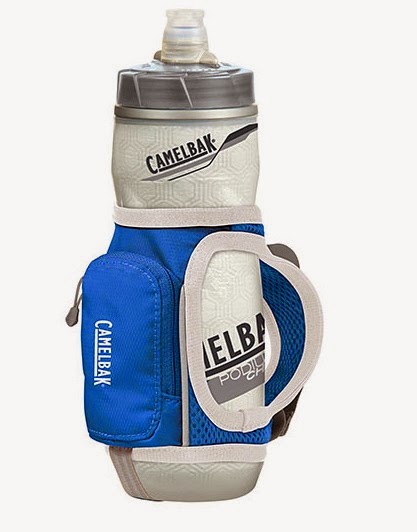 For a larger bottle, the pocket is a little on the smaller side, but you can still easily fit in a PowerGel, keys, ID or camera. Again the self-sealing Jet Valve has a quick turn dial that allows you to tightly close the nozzle when you are sure you aren't drinking it.  When in the open position, you still won't get much leakage at all, even when you are running. Regardless, I have yet to find a water nozzle that more efficiently sprays the water into your mouth than Camelbak's. I can't say enough about how much I like that top.

All told, these products are ones you might not put much thought into but the good thing about them is once you have them you no longer have to think about them.

Get your hands in or around these.  You will thank me later.
Posted by Dane at 12:30 PM