I review very few products that I don't particularly like. The reason for this is I tend to have a pretty good idea what I will like before I spend time reviewing it. I don't get paid for reviews and my workout time is precious. I prefer to actually spend time working out as to being a guinea pig for any product/supplement/what have you that comes down the pike. So, while Timex is indeed a sponsor of mine, the main reason they are a sponsor is because they make fantastic products. Sure, I go into reviews of products from companies I like or work with wanting the product to be good. But I don't let that color my review. This paragraph is my disclaimer of sorts in case some may think my review is biased. Of course, if you do, this whole paragraph was a waste of both of our times. 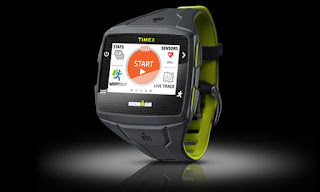 That all said, my review of the Timex One GPS+ is rather simple: I like it. I don't love it. But I like it. That might not sound like a resounding approval but since there are very few products I actually do love, liking it means I approve. Let me break down my thinking process.

When a product comes out, I often will read other reviews to see what people do not find appealing about it. What they like is usually of little consequence. It is what is displeasing or what they don't particularly care for which provides me the most interest. As a little fun adventure, I enjoying trying to guess how the reviewer feels about the product three sentences in, even if they are trying to hide their overall feeling. It usually isn't all hard. As such, I didn't bury my opinion in this review.

After reading many other reviews, the biggest downside I could find about the Timex One GPS+ was people did not know what category to put the watch into. Because of that uncertainty, if it didn't meet the X criteria of Y type of watches, then they didn't like it. I never saw a legitimate reason to pan something because it didn't fit your preconceived notions for what it should do (often flying in the face of what the product says it will do) but, hey, that's just me. Yet that didn't stop many from saying it was too expensive for a watch in this category or not enough battery for a watch in that category or anything else. Most of the complaints dealt with things the watch never claimed to be or do.

I first got the One GPS+ in late winter/early spring 2015. I absolutely adore Timex's Run Trainer 2.0 and have used it and its predecessor for the past four years. I am resistant to change and, for the most part, am not all that into gadgetry when it comes to my running.  It wasn't even until I started using the One GPS+ that I uploaded any workouts to Strava. I didn't get the site and didn't see the point.   I'm too busy worrying about my own running to care if Steve set a new PR on some random hill in the middle of Poughkeepsie. I mean, good for Steve but I am trying to PR in the marathon and am worrying about me.  I know, I know: I am a 80 year old trapped in a 3-*cough* something body.

One of the ways in which I test out a new product is by reading virtually none of the instructions and just trying to use it on the fly. As a reasonably intelligent man who, in spite of my general disdain for all the gadgetry that can get involved with running, still has a firm understanding of most of it, if I can't figure it out then most of the people out there cannot either. So the blind test is one I utilize greatly. The Timex One GPS+ did a admirable job for being intuitive. As there were so many functions I had never used in a watch before, obviously there was a little playing around. Otherwise, it was rather simple and intuitive. 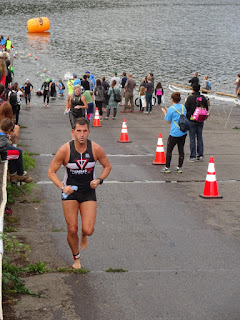 I put the watch to the test on some training runs and most important, in a race or two, before reviewing it. I utilized it in an open swim race, a triathlon, a trail race, and a few road races. I wanted to give it the full gamut of experiences. But before I get to that, let me explain a bit more about what the watch is. It is not a smartwatch. It is a sport fitness device.  Here are some deets.

It has a rugged exterior capable of diving 50 meters (150 feet) under water, a 3G worldwide connection provided (free for one year, $40/year after) by AT&T, 4GB of internal storage (for music), and a 1.5-inch, Mirasol screen. It's starting price was $399 which made some people balk but as I have said before expensive is only what some people think if they don't want the product. Now, however, you can get this sweet baby for just $199. (You want it when it first comes out, I guess you have to pay more. Wait a few months and you get a steal!) Before I go too much further, I am going to send you over to DC Rainmaker's ever popular blog for a lot of the technical stuff. Heck if Runner's World is going to say he is one of the 50 most Influential people in running, who am I to argue?

My experience with the watch was solid. As I do not have wireless headphones, and almost never run with music, the fact that the watch could hold all my MP3s meant little. I uploaded them and it went smoothly but I don't use them. I did, however, have an instance where it synced to a rental car and freaked me out as I could not figure out which radio station was playing Mill Vanilli's "Blame it on the Rain." (Yeah, it's in my collection. Wanna fight about it?) 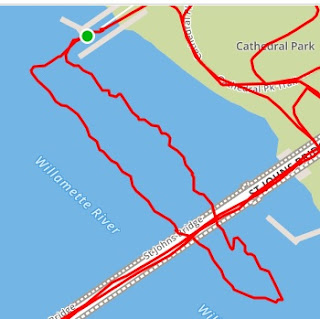 My biggest problem with the watch was one easily solved: the touch screen. I found out that the passing of water over the screen can cause some problems.  By that I mean that a button could be pressed or a screen swapped simply when you were swimming. I never would have thought water could do this but it ended up being a problem in that first open water swim. No problem. Once you start your workout, you only need to depress another button for about 2 seconds and it locks the touchscreen. Voila! It then worked perfectly in the triathlon I did. (I later learned you can depress the button before a workout is started as well, nullifying any need to wait. You just have to start the workout with a button and not the screen.) Furthermore, while I was reading that many watches will give you very wonky data unless they are swim-specific watches, it worked just fine with me. There was a little bit of back and forth but heck I could have just been swimming around the flotsam which was all the slower swimmers in front of me.

Another complaint I read was the short battery life. At "only" around 8 hours, the complaint was that the watch could not possibly be used for an Ironman.  However, as DC Rainmaker points out in the comments of his review: "Except it’s not branded as a multi-sport device. It’s branded as a running/marketed device." Of course, someone then replied "I totally get it…. I just think they shouldn’t brand it as Ironman unless it’s going to be multisport."  (This makes me laugh so hard. It is like the Concrete vs. Asphalt debate I posted about where someone tried to argue by saying "Physics aside...") So, anyway, it has a "short" battery life. If your workouts last longer than 8 hours, maybe this isn't the watch for you in fully-loaded GPS and music playing mode.

One option I did not get to try out but in hindsight is a huge selling point is the live tracking the watch has without the use of a cellphone. As technology does its pendulum swing back from tiny tiny Will Ferrell phones to basically carrying a cookie sheet with wi-fi, phones are getting bigger and bigger. The ability to have someone live track you from just your watch is amazing to me. (Also, an unintended benefit of this is if your watch gets stolen, you can track those thieving bastards down.  My friend Shannon Coates had this exact thing happen to her in Portland and voila!)  In addition, you can do messaging without a phone, and as mentioned above, listen to your MP3s. Sure, there is no full keyboard and swiping through all your music might be more tedious than one could like, but you are supposed to be working out, not texting Tolstory-esque messages.

I didn't even list all of the things you can do with this watch (like send emergency messages) but I think you get the overall feel. It's a solid watch even for the person who may not necessarily want or understand all the bells and whistles. There is definitely room for improvement, especially as it feels Timex is the first to forge into this new area of watches. Moreover, as you get to understand all the parts about it you didn't think or know you wanted, you will be glad the watch has incorporated them into its innards.