I comment on this with no great happiness. Running Times, the "go-to source of information and inspiration for the dedicated, serious runner and fan of the sport" will no longer be published starting in 2016.

I have always enjoyed Running Times. Even when I was a newbie runner getting my 10k workout and latest semi-fluff piece in Runner's World, Running Times seem to me like the upper echelon. They talked about elite runners of whom I had never heard. They focused on cross country teams with elongated pieces on high schoolers with otherworldly talent. They introduced me to all those races which are run in kilometers. There were rankings of collegiate running teams who I had to google to even find out what state the college was located. Granted, some of the repeated columnists never caught my eye. I wondered how some contributors had columns as they seemed rather devoid of a good story to tell or a sense of perspective on their own talents. (One columnist repeatedly wrote like they were a far better runner than they were, never mentioning times or exact races for context. I came upon their results a few years later and thought: "Wait. This runner is bragging?) But you aren't going to like every article in every magazine. In fact, the ones which are so good are what keep you coming back.

Running Times once published an article of mine as well. This never blossomed into the full-time writing gig I hoped it would but it was still exciting to be recognized by a magazine for your accomplishments not only as a runner but as a writer. The article I wrote focused on recovering from running multiple marathons, (before the world really got marathon crazy) and allowed me to talk to some amazing athletes as well. My own expertise in the matter came from having just finished racing 52 marathons in 52 weekends. But the "before the world got marathon crazy" part might be the problem in why we are losing Running Times.

Look, I have no knowledge why exactly Running Times is closing shop. I have plenty of ideas, however. Over the past few years, for a multitude of reasons, I have often lamented that one of the best and worst things about running is that it is a participatory sport. It encourages people to do the opposite of so many other sports and actually join in. That is wonderful. We celebrate the last marathon finisher and laud accolades on those who get out and try. This is also fantastic. I am guessing this is also the demise of the magazine.

I recently came across a runner who was touting their accolades, including being a multiple Boston Marathon finisher. Say what you want about whether slower runners have "watered down" being called a marathoner (I see the logic behind both sides of the argument) but being a Boston finisher means something. If you are using it to sell yourself, well, then you are assuming people will guess it means you are qualified to run there. Well, this runner had indeed finished Boston: doing so in a time of 5:15 this year. This would work great for an 80 year old female. This runner, however, was not that but rather a healthy 29 year old male.  In addition, on this runner's personal website which was promoting possibly coaching and other services (a bit hard to tell exactly) they spoke about being a "California Marathon Series Bronze Medalist." That sounded impressive so I tried to figure out what it was. Well, it appears to be completely made up. Figment of this runner's media machine. I asked them about it in a tweet. They promptly removed it from their website without responding.

What in the sam hell does this have to do with Running Times ending its magazine? Well, this runner is not alone out there in this brave new running world. As more and more runners are treated like amazing athletes, the need to look up to anyone more accomplished or more learned, diminishes. I see on many occasions people with no real reason to be revered by their peers receiving unjust accolades and praise. You see people calling themselves "running experts" or certified in whatever to teach whatever else. Most of it appears to be without any real reason other than they have a flowery webpage and know how to call everything "epic." Believe me, I do not think I am the greatest purveyor of knowledge on running. One thing I have learned after racing 156 marathons and doing things no one else ever has is I barely know a damn thing about running. I truly believe the more you do and the faster you get the more you realize you really know nothing and must constantly be learning from everyone. But that doesn't sell training plans or blog posts or anything else. And if you can put together enough info to get you through a training run from the free blogs out there (and dear dog are there a lot of running blogs), why would you think you need to pay for a magazine? 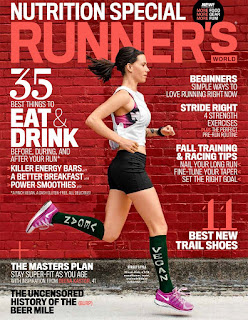 And that has killed Running Times. This magazine pointed out that you are slow even when compared to the
69 year old grandmother of 17. Its articles talked about more than "5 Moves to Get Great Abs!" There were people with actual knowledge, learned from the best of the best who were trying to impart it upon you.  But one of the things which keeps adults from learning new things (like languages) is hubris. We don't like to admit we don't know what we are talking about. Reading Running Times was an exercise in admitting how slow and ignorant you were. Some columnists, like Roger Robinson (Kathrine Switzer's husband), are probably both faster AND smarter than you. This didn't bode well in the "I deserve everything and will complain loudly if I don't get it" social media world we live in.

But there have been some changes in the overall feel of the magazine lately. Running Times became a little more fluffier. Cover photos got a bit more glossy. It almost seemed like there were two Runner's World magazines. (As an aside, I enjoy Runner's World and think it definitely has its place as a runner's magazine in today's world. Considering it owned Running Times, I guess that place is at the top of the mountain now.) With these changes and the reasons I mentioned above, I am not surprised that the time has come for Running Times to move on. But I am still disappointed.

I can only hope that some other magazine will pick up the slack. Perhaps Runner's World will begin to include a little more of what Running Times had in it that made it so special. Maybe some other publication will rise from its ashes. Ultrarunning Magazine, while obviously focused on the longer race variety, has stepped up its game lately from just being race reports written by runners who couldn't exactly write. So has Trail Runner Magazine. But those magazines are far more of a niche in our sport. Same as Marathon & Beyond which, coincidentally (or maybe not) is also closing down its doors very soon. In any regard, whether there is any sort of change, losing Running Times is a big loss for runners out there, even those who never read a page of the magazine. Innovation and changes which have helped make running a sport for the masses have started with those who were inspired by those often covered within its pages.

Let's hope those looking for inspiration are able to find it elsewhere. Hopefully, they also won't mind maybe spending a few bucks to help those who know what they are talking about share it with them.
Posted by Dane at 3:05 AM

This former California Marathon Series Bronze Medalist PRed at the 2015 NYC marathon running a 4:40:42. He started in wave 1 which has a 3:20 cutoff and is part of the group of self-indulged race walkers which got no consideration for folks that have put in months and years of training to race the marathon. I also started in wave 1 in NYC and passed approx. 8000 runners like the CA medalist for a 3:19 finish. This after coming to a full stop on the Verrazano-Narrows as the race walkers in wave 1 was stopping for photo shots and running at least 1 extra mile (I ran 27.6mi) because there were no other options other than to run circles around the folks in this group.

The California Half & Full Marathon Series medal information isn't hard to find, and wasn't a "figment of this runner's media machine" though perhaps that runner earning it was (I don't know, I don't know who all has earned one).

Here is all of the information, including the criteria for each level: http://calhalfseries.com/

Remember, in running as in life, not everyone thinks faster is better. Faster means more competitive, more likely to podium, etc. but that is not why everyone runs, even in races.

On an unrelated note, I loved Running Times. I thought Runners World was going to start incorporating it into Runners World--perhaps as a 10-15 page news section--and was bummed to learn that's not the case.

Show me where on The California Marathon Series website where one is awarded a "Bronze Medal". Take your time. I will wait.

I said nothing about faster is better. Therefore I see no need to argue that point.

It's a shame. I have subscribed to both Running Times and Marathon & Beyond at times. I agree that their market is dwindling. Runners World is decent, but not the same. I'm saddened by the rise in popularity of publications like Women's Running. Just for kicks I subscribed to that one for a year; if you think Runners World is fluff, check out Women's Running. Most of the content is so superficial, and the writing style is informal and written like texting language. I hope things swing the other way at some point so we can read more serious content. I'm not fast or elite or special in any way, but I'm inspired by stories about elites and sub-elites and serious running technique articles.