Emotion Over Logic in Rio 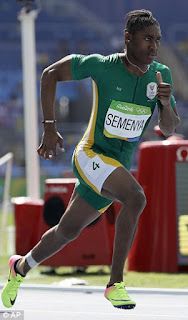 This is not going to be a very popular article, I am assuming.

Abbey D’Agostino shouldn't be allowed to compete in the 5000m final.

Caster Semenya shouldn't be allowed to compete at all.


(N.B. I am open to any new information with regards to any of the points I have stated and totally reserve the right to change my mind when presented with it. Presently, however, I have heard nothing that would make me change my stance.)

Seven years ago I first wrote about Caster Semenya. My feelings remain the same with regards to her plight as a human being dealing with the complexities of her genetic make-up. I cannot imagine going through that in anonymity, let alone on the world stage. However, with a testosterone level three times higher than what is allowed by Olympic standards for female competitors, there is simply no way she should be allowed to compete. (I would like to nip in the bud any further "But some basketball players are taller!" or "Michael Phelps has longer arms than anyone not a squid!" arguments. These, and multitude of other arguments of the like, fall short in so much that none of their traits have been ruled outside the bounds of fair play. A line must be drawn somewhere in determining the difference between the genders with regards to sport and it was drawn here using a extremely wide margin of testosterone which can be allowed. What margin? Women could compete only if their testosterone levels were below 10 nanomoles per liter — a cutoff devised by sampling woman athletes with polycystic ovary syndrome (a condition associated with elevated testosterone levels) and adding five standard deviations to it. )

I have also seen statements that this is a racist attempt to deny Caster what is hers because no one says anything when Phelps was considered to be a bit of a freak or Lance Armstrong's reign was going on and it was clear, even in the absence of PED and blood doping,that he was an amazing physical specimen. The stupidity of this claim makes legitimate gripes about the way cases like Semenya's need to be handled weaker. We all know that those at the top of their sport do things we all can't do. But the jump between what they can do and what their peers can do is not nearly as large. It has nothing to do with race and everything to do with fairness. The greatest female athletes in virtually every sport cannot hold a handle to the greatest male athletes in the same sport. So allowing one who is obviously much closer to the men and the women, based solely on DNA and not looks, or voice or any other superficial factors, is simply not the way sports should be run.

N.B. Since I wrote this initially it has become clear that Caster has XY chromosome. In case you forgot what you learned in junior high biology, typically females have XX chromosomes while males are XY. Caster is not an even an outlier like Phelps, or cyclist Miguel Induráin whose lung capacity was off the charts. She is competing in a sex classification which she has no right to be competing in.  Again, this SUCKS for Caster.  But does it suck more for her than it does all the other women competing who are so much further behind her because they don't have the testosterone she does?

Remember, intersex births, like Semenya's are extremely rare but it’s believed that all three of the medalists in the 2016 Olympic women’s 800 - Caster Semenya, Francine Niyonsaba and Margaret Wambui - are intersex.  The presence of the Y-chromosome is the THE single greatest genetic “advantage” a person can have.Don't take it from me. This is what sports scientist Ross Tucker – who actually testified on behalf of Semenya before the Court of Arbitration for Sport as he thought one of the IAAF’s studies used against Semenya was flawed but also supports, in theory, limits on testosterone for women in sports.

For the millionth time, this is very unfortunate for Caster. For a decade at least she has been dealing with this problem. By all accounts she is a fine person. She is just competing in the wrong class.

One of the feel good moments of this finals was the aftermath of the collision between Abbey D’Agostino and Nikki Hamblin in the 5000m women's semi-final. After a relatively innocuous collision turned into a fall, which turned into something much worse, D’Agostino turned to help Hamblin up.  After getting Hamblin going, she herself collapsed, in obvious agony. Watching the race, I told my friend there was no doubt D’Agostino tore her ACL. (Ends up, she did just that. Drats.)  Somehow, perhaps not very intelligently, she finished the last bit of the race, hobbling along. Eventually needing a wheelchair to even leave the track, D'Agostino was an inspiration and her touching moment with Hamblin with live on forever. 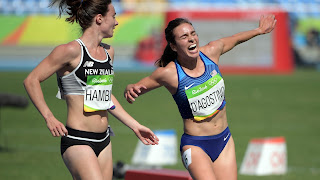 But like the buzzkill that has to point out there was definitely room for Jack on the floating door with Rose in Titanic, I have to dampen this happiness by saying there is zero reason why D’Agostino and Hamblin should be allowed to run in the 5000m final. A protest was filed shortly after the race and both were granted entry. I have yet to see a single reason why that protest was granted.

Earlier in the Olympics, a swimmer false-started in a semifinal which is an automatic disqualification. However, judges apparently decided that the swimming pool area had been too noisy and gave the swimmer a reprieve. Now, we can argue whether that was a little too lenient or not, but the fact remains they gave a reason for their decision. With D’Agostino, Hamblin and Semenya, it seems to be without reason. It appears to be just about not wanting to cause problems or alternatively to make a good story even better. So much has gone wrong in Rio with jello water and Ryan Lochte maybe faking a robbery and cyclists nearly dying (not to mention Zika) that it feels like this is all a diversion. "Look over here! This is good! We are the good people letting good stuff happen!"

Anyone who knows me is aware I have fought for LGBTQ rights for a long time. Any assertion I would be against Semenya for that reason would be without merit.  However, I was recently talking with a former Olympian swimmer about doping when these issues with all three of the above cases came up. We both feel that it is in no way mutually exclusive to grant Semenya any and all rights as a woman and also say, given what is in her blood and DNA, she simply cannot compete as a female in the Olympics. There are standards that are strictly adhered to with regards to what can be allowed in your blood and Semenya is not just a teensy bit over, but three times the allowable limit. But in a climate where many (rightfully so) are trying to make up for the past injustices to LGBTQ people, allowing Semenya to compete is not the right way.

With D’Agostino and Hamblin, nothing tore at my heart strings more than watching D’Agostino fall, and rather than get up and continue running, stopping and trying to get Hamblin to join her. Time and time again the sport of running and its competitors show heart and compassion even on this the biggest of high stakes stages, often lacking in every day life. As a runner and a track and field fan, I obviously want the US to do well in their events. However, the closest I have seen for why D'Agostino was allowed to continue was "for her efforts and under the circumstances." Well, unfortunately, that's not even close to being specific enough.

Of course, now it is moo point (like a cow's opinion) as D'Agostino cannot run. Hamblin still can however. It will be very interesting to see how she fares and I undoubtedly wish her the best. But, in these sports of time (running and swimming, especially) where there are strict rules we must follow, some times we just have to live with the fact that not everything is going to go as scripted. What makes these games so excited, what makes race so fun to watch, is that even if you are 99% sure something is going to happen, it still has to actually happen. If the most talented and best athletes always won, there would be very little reason to watch. There is drama. There is uncertainty.

And there are rules. Which should be followed.

I completely agree. This is what happens in racing. Mo Farah could have pulled that card in the 10K, but he got up and fought. If we don't follow these rules and start following what "should" happen, where does it end? Oh the runner who "should" have qualified but didn't because they had a bad day?

I think the same should be said for Margaret Nyairera Wambui?

As a former olympian I do not agree. Nature gave Semenya a natural athletic advantage over other female athletes. In men testosterone varies enormously yet no one forces men to suppress their levels to generally acceptable levels, so why should a woman?