The vaunted and venerable Hood To Coast Relay (which I was lucky to be part of in 2014) has itself a bit of a homeless problem. No, the race itself is not worried about losing its housing but rather Portland's homeless problem is spilling over onto the race course causing a bit of consternation.

dealing with an enormous homeless encampment in an area not far from where I live. Given the fact that many people will be running through this section alone at night, this is a wise decision on the HTC's part. This decision is byproduct of the unfortunate homeless problem that Portland finds itself in. Some have stated that it is an insult to the homeless here as they haven't posed any real threat to anyone in Portland. Personally, I couldn't disagree more. 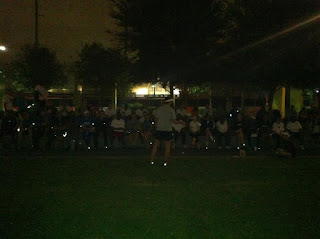 For clarity's sake, I am not saying that the homeless in and of themselves are a problem.  I have given various speeches and interacted with homeless in a variety of ways, including a run and talk with a few Back on My Feet organizational chapters in the U.S.Often people fall on tough times, slip between the cracks, and need a helping hand. In fact, the 2008 economic crash showed how much of America is about two paychecks away from being homeless.

Unfortunately, however, I have firsthand knowledge of some of the homeless here in Portland. Once, while running in broad daylight around Portland's waterfront, I was attacked by a homeless person. Without going into much detail, let me attest I was able to fend off the attacker, but I was also relatively unsurprised it happened. I love Portland and its liberal ways but its legalization of marijuana, extremely lax drug enforcement (have seen many homeless lighting up crack pipes in broad daylight) and almost a brazen attitude from encampments of homeless have given almost a "try and move me" attitude amongst many of the homeless here. They crowd public areas, befoul public restrooms and, as is the main problem, set up the most elaborate shanty-towns in highly-trafficked areas.  I am a fairly self-assured, large-than-average fella and even I get my hackles raised.  I can't imagine what, say, a slighter female must feel like in some of the areas.


A few years ago I went to cheer on runners around 1 a.m. along that trail because, well, I am a nightowl and I like to support runners. On numerous occasions, in spite of the fact I sat with a flashlight on, I surprised more than a few runners who were too lost in their own thoughts (some with headphones on.) Given this lack of general unawareness, it is definitely best that all runners avoid this section. Locals have reported habitual drug use, trash left everywhere and in some cases, people who refuse to leave areas where generosity has been shown to them.

There is a systemic problem in Portland that my wee little website is hardly going to fix.  But since my first day of living here, I have always been confounded by the laissez-faire attitude to those who habitually are breaking the law. When I get a ticket for running a yellow light at 1 a.m. five blocks from my home yet squatters and homeless by choice (what I call those who seem homeless but are charging their iPhones at plugs around town) seem to skate by with no repercussions, it is a tad maddening. My normally wonderful view from my own window often is interrupted by some vagrant taking a pee in a parking lot, smoking substances, and generally not caring about not being belligerent. When I move from Portland in a little more than two weeks, that will not be one of the fond memories I take with me. 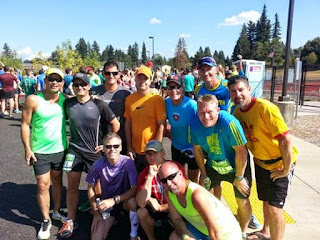 The Portland police have a planned sweep just a few days after the race. Why, with 12,000 runners coming through the area, for one of the most iconic races in North America, they can't do that sweep beforehand is beyond me. Furthermore, actions taken by politicians have seemed to do little to help the problem and are often head-scratching. Moreover, the fact it has gotten so bad in the first place in a blight on an otherwise stellar city.

One can only hope that this inconvenience to a high profile event will help solve this unsettling problem. Runners, the general public, and the homeless in need of help all deserve better.
Posted by Dane at 12:12 PM