I met some runners at the Santa Barbara Marathon a few years ago. When I saw they were starting an apparel company on Kickstarter, I was interested and chipped in a few bucks. When they got their gear up and running, I said I would be happy to product test it for them. So that is what I did.

For the purposes of this review, I said I was most interested in their singlet top and their shorty-shorts.  I have nice quads and I want to show them off. Sue me. Actually, I just prefer to be wearing as little as possible when I run.  I sweat like it is my job and if I can air this hunkahunk of burning love out, it is best for all involved, including my own finishing time. 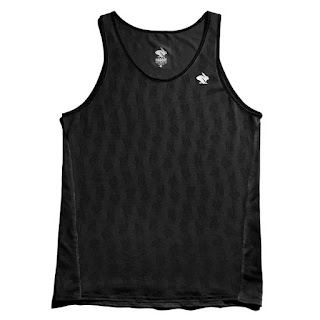 First off was the sleeveless shirt appropriately named "Welcome to The Gun Show."  From their website: "Made with our rabbitMESH fabric. rabbitMESH is a perforated tight-mesh fabric that evokes the spirit of our patronus: the rabbit. This rabbit-perforated mesh is lightweight, breathable, cling free, sag resistant, and scratch and chafe-free."  I will definitely be the judge of "breathable."

With Portland experiencing a resurgent summer of hotness after a nice break, it would be a great time to test out all the apparel. The singlet preformed rather admirably, doing a good job of wicking away the sweat. I noticed the little holes in the shirt were actually in the shape of the company's logo, a rabbit. That was pretty neat. It also did its job. There is really not much one can say about a sleeveless running top.  Basically, if you aren't thinking about it, that means it is working. It was not meant to carry a gel, it is not fancy, it is, I feel, made to be raced in. So I gave it a go in a half-marathon and found it worked just fine. Kudos all the way around as I never thought about it once during the runs or the race.

More important, at least to me, were the shorts. I am always looking for some good shorts, given the whole aforementioned sweat thing. I have had more chafing problems than I need to go into, even with proper lubing and other precautions. As such, the "Daisy Dukes" of the Rabbit brand were going to be put to the test. 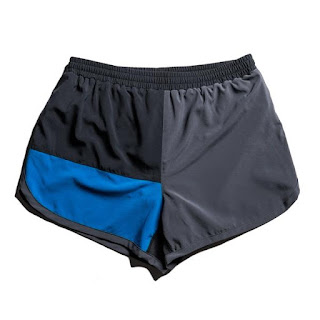 I tested them out on a couple of runs, varying both the length of the run and the type (e.g, sprints, hill work, etc, in order to see how they performed when the legs were doing different ranges of motion.)  The short version is I like them. Plus they look snazzy. Appearance is not something I normally care about but if two pairs of shorts perform the same and one is ugly as sin, of course I will go with the one which looks a tad better. The best way to see if something works is not just in training runs but in  race. So, off to the testing grounds I went with the shorts in tow.

Taking on the trail 15k that is the River Valley Run, I knew with the complete changes in terrain, river crossings, and out and out sprints on pavement, I would see how these shorts really worked when not in a controlled environment. At the end of the race, I can say I have nothing but good things to talk about when it comes to the shorts. While I normally like the shorter legs and open cut on the sides, sometimes shorts do not provide enough coverage or support for manparts. As good ole Sweet Brown says, ain't nobody got time for that. 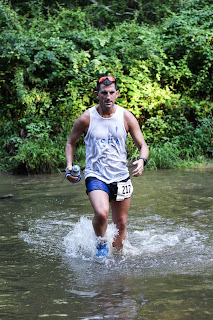 However fortunately for all in viewing distance, these shorts effectively hid my thunder. Moreover, they kept everything in place, provide a strong, sturdy fabric that survived getting hit by a branch or two with no tears. An ample zipped pocket on the pack was a nice surprise as well, especially since, like the singlet, these shorts feel like they are made for racing, not jogging. An internal front pouch pocket felt neither like it would bunch nor was it in the way.

Given my sweat glands, it is hard for me to tell how well they worked with wicking, really. Plus, the real test of race day was so disgustingly hot and humid (broke records for that day in Maryland) that nothing was going to not be drenched. But, on the flipside, zero chafing from that day or any of my previous runs. That, my friends, is a real winner in Dane's book.

I did not get a chance to try out any of the other apparel but if I do, I will be sure to let you know how it works.  But given the top notch quality of these two samples, I am sure it would receive high marks as well.
Posted by Dane at 9:03 AM