If you are a reader of my blogs you have heard me mention “Cowboy Jeff”. 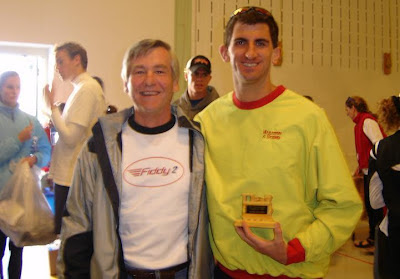 Robert Bishton, who goes by “Jeff” is one of my favorite running people ever. We met at the Little Rock Marathon during Fiddy2. On a shuttle bus from the airport to the hotel we found out we were both running the race and struck up a conversation. I soon learned that Jeff was on his way to running a marathon in every state, a by-product of his desire to lose weight that had been bothering him for quite sometime.

Starting off with a 5-mile walk a day, Jeff “… continued to add more miles by adding additional sessions and by morphing my walks into “wogging,” then jogging, and finally, running. By the Spring of 2004 (after a year of losing weight) Jeff was down from 200 lbs to a svelte, lean and mean 140. Now was time for him to complete his goal of running a marathon. He registered and conquered the Baltimore Marathon in a time of 3:55. I will note that his time was faster than my first marathon of a 4:12. Even more spectacularly, as Jeff notes “… until my move from the Washington-Baltimore area to Florida in January of 2007, about 90% of all my between-marathons training has been on a treadmill.” Dang.

So away he went on his quest and away I started on mine. In Little Rock our paths met. On the morning of the race, it was a little chilly so I donned a t-shirt I never expected to see again. As I stepped out of the lobby, there was Jeff and a few other runners. We sauntered to the start together, chatting and laughing. Once there, I shed my shirt and was about to toss it aside. Jeff said he would be happy to put it in the bag he was checking and since we were in the same hotel he could just give it back to me. Never one to be unnecessarily wasteful, I thanked him and handed over the shirt.

I forget to mention that at this point Jeff was wearing a wide-brimmed Arizona State SunDevils cowboy hat. Jeff wore this in every race. I highly doubt I am the first one to call him such, but soon “Cowboy Jeff” was dotting my race recaps as we ran into each other again and again during 2006. 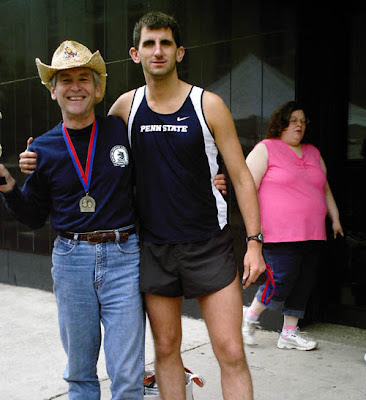 In fact, after Little Rock, I forgot to meet up with Jeff and figured my shirt was gone. No big loss. But I underestimated Jeff’s kindness. Seeing we were both signed up for the National Marathon a few weeks later, Jeff said he would look at me for the start for a mini reunion. I welcomed such a meeting but was flabbergasted when he approached me that morning brandishing the t-shirt I had left behind in Little Rock. He went to all the trouble to bring it along with him. What a guy.

As plans were announced for the Drake Well Marathon, Jeff was one of the very first people to sign up to support my cause to raise money for L’Arche Mobile. Even moreso, without my knowing, Jeff coordinated with my mother to set up the pasta dinner the night before the race. He made all the arrangements and the band of 21 runners enjoyed a Italian dinner with desserts made by my Mom for all to enjoy.

So when such a good person achieves such a great thing, you want to others to know. You see, just a few short years after his first fateful step out the door to lose weight; his first foray into the marathoning world; and his first time crossing a marathon finish line, Jeff completed the goal of running a marathon in all 50 states and the District of Columbia on December 8, 2007 in Kiawah, South Carolina.
Could not have happened to a better guy. Three cheers for Jeff. I can’t wait for the day when I get to see your hat again at a starting line.

As you know I love statistics, here are some of Jeff’’s from his wonderful Odyssey.

8. Age Equivalent Time: 2:55:36. A statistical comparison tool was developed to allow runners to compare their finishing time with a person of a different age. I compared my fastest time with that of a 30-year-old because most of the fastest male runners are in the 30 to 34-year-old division.

B. Going down the Trapp Family mountain (the family portrayed in the Sound of Music) during the Stowe Marathon, VT, on September 10, 2006.

13. Greatest elevation change: Grandfather Mtn. Marathon, Boone, NC, July 9, 2005. Starting line elevation is 3,300 ft and the finishing line elevation is 4,300ft with over 2,600 ft of up and down change. That is hilly! It was rated as the 8th most difficult marathon in one publication’s Top-Ten Most Challenging Marathons list.

14. Coldest: Eisenhower Marathon, Abilene, KS, April 7, 2007. Starting time temperature was 19º with a strong and constantly blowing wind that gave it a wind chill of 5º. The Gatorade turned to slush and my fingers froze so stiff that I couldn’t bend them around the cups.

I love the Cowboy Jeff stories. I hope he'll be at one of my races some day so I can meet him.

Major congratulations to Jeff for accomplishing his goal is such a short time! That shows incredible drive and commitment, and he's pretty fast, too! Way to go, Jeff! Thank you for sharing this with us, Dane.

Wow...talk about inspirational! Congrats Cowboy Jeff for all you've accomplishment and thank you Dane for sharing with us!

Very cool. Turns out I ran a marathon with Cowboy Jeff in 2007. We were both in Fargo and I finished about 11 minutes ahead of him. Honestly can't say that I remember seeing an ASU cowboy hat in the crowd, but I was also freezing my butt off pre-race and totally zoned in during it (I also don't remember more than a handful of landmarks along the course, which in Fargo probably isn't much of a loss).