Interview with my hometown paper

The other day I received a surprise phone call from my hometown paper. they wanted to do an interview about both my new book and also the upcoming Drake Well Marathon. Glad to do both, the following is the result. 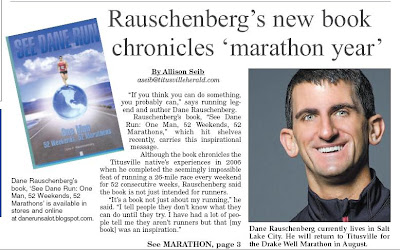 “If you think you can do something, you probably can,” says running legend and author Dane Rauschenberg.

Although the book chronicles the Titusville native's experiences in 2006 when he completed the seemingly impossible feat of running a 26-mile race every weekend for 52 consecutive weeks, Rauschenberg said the book is not just intended for runners.

“It's a book not just about my running,” he said. “I tell people they don't know what they can do until they try. I have had a lot of people tell me they aren't runners but that [my book] was an inspiration.”

Whether he has ever changed anyone's life with the book, he said he doesn't know for sure. “If I can put [someone's] foot in their shoe and get them out the door, I'll take that credit,” said Rauschenberg, who now lives in Salt Lake City.

According to his mother, Barb Rauschenberg, of Titusville, once her son puts his mind and heart into something, she knows that he will put all his effort into accomplishing his goal.
*

“He said that after he graduated [high school], he wanted to go to Penn State,” said Barb. “And I told him, ‘Wow, Dane that's an expensive school.' But he put himself through college and law school. He is very determined.”

Dedication is just what Rauschenberg needed to accomplish the feat of running weekly marathons for an entire year.

He ran on weekends, flying to various locations and paying for airfare, accommodations, and rental cars. He returned home to Washington, D.C., during the week to work a full-time job at a patent company.

“The traveling was a difficult thing,” said Rauschenberg. “I had to maintain a full-time job, and I had to make sure I was home on Mondays. I had to pay for the entire thing out of my own pocket. The entire year was unbelievable.”

With eight months of planning the previous year, Rauschenberg set out to run the impossible, but he did not run without cause. Knowing that his goal to run 52 marathons would make news across the country, he ran in honor and support of the charity L'Arche USA, raising money and making the public aware of the charity.

“I knew that what I was doing would be able to get a lot of attention for a charity,” he said. “Not many people knew or have heard about L'Arche USA.”

L'Arche USA, originally a French charity established in 1964, is a foundation that brings people with and without developmental disabilities together to learn, support and build relationships with one another to enable growth. The first U.S. L'Arche began in 1972 in Erie.

Aside from raising awareness and funds for a charity, Rauschenberg said other memorable moments have come out of this experience.

“I ran a race in Niagara Falls that started in Buffalo, N.Y., and at the time my personal best was three hours and five minutes,” he said. “I had no idea that as I continued I would get faster. In the 42nd race, I set a new personal best, but I also broke a three hour race. To get faster and drop six minutes was extraordinarily memorable.”

Another memorable race for Rauschenberg was his 51st. It was a weekend he knew had no scheduled marathon anywhere in the U.S.

With no race to run, Rauschenberg and his family set up a marathon in Titusville at the Ed Myer Complex.

“It was hard to top the Drake Well Marathon,” said Rauschenberg. “To have people come together across the country and bring it together [in Titusville] was amazing. It was definitely a memorable race.”

Rauschenberg is helping plan another marathon on Aug. 9 this year in conjunction with the Oil 150 Celebration in Titusville. The race will be held at the Ed Myer Complex once again.

“A lot of [the marathon] is going to be run on the bike path. Studies have shown that marathons have boosted economies by thousands and thousands of dollars,” said Rauschenberg. “We would love to have the community's support. And anyone who can volunteer would be greatly appreciated.”

Coming back to Titusville to run a marathon was like a reunion for Rauschenberg, who is a 1994 Titusville High School graduate. He began running track and field during his junior year; however, he admits that while in high school, swimming was the sport he mastered, not running.

“Brent Henderson [THS track coach] never really pushed me to join the track team, but he was someone who I highly admired,” said Rauschenberg. “He kind of helped me lay the groundwork [for what I have accomplished] just by being such a great guy.”

In his book, Rauschenberg not only names Henderson as an inspiration, but other Titusville natives who made an everlasting impact on his life.

His family is another support system that he credits for his success.

“From my personal life, my parents have just been supportive of everything that I do,” he said. “They were like, ‘Are you sure you can do this?' and I said, ‘I think so,' and they were behind me 100 percent.”

He added that his parents, who have experienced tough times themselves, must have been an inspiration on some level. His father suffered a hunting accident when Rauschenberg was a child and his mother overcame heart complications and surgeries. He said he found inspiration in how his parents dealt with their problems.

With some ideas in mind for another “impossible” race, Rauschenberg said he would like to do a 3,000 mile, cross-country run in 60 days from Los Angeles to Manhattan.

“It won't happen until next spring or possibly next fall,” he said. “I know what I can do with my running. It would probably be a good book.”

Rauschenberg's book is available in stores and online at danerunsalot.blogspot.com. Rauschenberg directly ships books to customers who order the book on his Web site, so he said he is willing to autograph purchases.

For more information on the marathon to be held at the Ed Myer Complex in August go to drakewellmarathon.com.
Posted by Dane at 10:32 AM

I saw you pacing at Carlsbad and met you at the Surf City expo where I bought your book. And then saw you at your car after the race. I'm more than halfway through your book and enjoy reading it very much. Congratulations on getting a piece in the paper!

See you in Salt Lake City!

I love your book and am already on my second reading (the first one involved a near all nighter--which perhaps will help prepare me for Umstead 100 miler!)

Good luck with all your future endeavors...both running and in life!

I know you will go far!

Good article! It's always kind of dicey when they start interviewing mom. Lucky for you, no naked baby pictures ended up in the paper.