More pictures to come when I get them!

At the Marine Corps Marathon expo last weekend, I crossed paths with one of my favorite twins, Cindy of Running Skirts.  In our conversation we found we would both be at the Santa Barbara Marathon expo- each running the half-marathon.  Cindy mentioned her twin Christy would be running the half as well and would be shooting for a time around 1:30.  I told her I would be happy to pace Christy in the race if she felt so inclined.  And just like that, I had something to do at a race where I was just going to go for a nice jog anyway.

My weekend, a few months ago, looked completely different but one must roll with the punches and make do.  As such, I was pleased to spend some time with my friend Barb even though it looked like she might not be able to do the race at all because of a lingering foot problem.  At the expo, I spent some time trying some new products and am looking forward to see if they affect my training in the future.  Having run the full marathon last year, I knew the half more or less consisted of the second half of the race course and some minor changes would not add much of anything new to the race itself.  As such, I knew I would be able to give Christy all the info I had in her attempt to run fast.  I was aware a long drive from Running Skirt HQ in San Diego the day before the race and then a long day at the expo itself would make the race the next day a little difficult for her but we would give it a go.  That really is all one can do at every race, really.

We had a slight delay to start the race, which in hindsight was quite helpful.  But before the sun had even thought about breaking through the clouds, we were underway.
First 5k: 6:51, 6:52, 6:58 The first three miles contained mostly flat running with some slight downhill portions.  I wanted to get Christy out in front of the masses, knowing that around mile 3 we would encounter a narrow bikepath, thereby limiting our ability to pass those who had incorrectly lined up.  So even with a mind to slow our pace in the first 5k, we were still able to utilize the downhill portions to get us right where we wanted to be.  In addition, with a little more daylight from the late start, the bikepath portions were much more navigable.

I tried my best to keep a steady mixture of advice and jokes for Christy as the first few miles went by and recalled specific instance from running the race the previous year.  While record heats had been set in the previous few days, this morning was much cooler with an overcast sky.  I remembered last year being quite parched at this same point in the marathon because of another unnaturally warm day.  I knew Christy would being a battle for her hopeful sub 1:30 time on this day but really hoped she had the energy to crush it.

With a flat mile, we put a little distance between ourselves and a few other female competitors but our time was not what I was hoping for.  Hitting the 5th mile, I knew getting back down to where we wanted to be would be tough.  Christy mentioned she really did not have the zip in her legs that she was hoping for after working the expo all day prior.  Having done the same thing many times, I can attest that it is an energy-sucking task.   I said I wasn't ready to give up on the sub-1:30 yet but wanted to know if she would be happy with a simple PR.  She said she would which made me happy.  Oftentimes you must simply take what the day and the course give you.

I knew the first major uphill of this race was right near mile 6 but there were a few slow risers prior to that we had to navigate.  Christy did a fair job of staying in my slipstream when the wind picked up a little bit but we again lost more time on the next few miles than I was hoping for. The hill at 6 slowed us down a little bit more and I was hoping that some of the small downhills to come would assist us in getting some time back on our side.

As all my attention was being paid to Christy, I did not notice much of the surroundings. I barely noticed the fans, volunteers or scenery. I would hand Christy a drink at the aid station and give as much advice as possible.  With a few downhill miles followed by one uphill at mile 8, I was quite pleased with how well Christy was responding to these latter miles. I felt for sure that if we could just get to the big hill at mile 10 we may be able to lead her to the barn and get at new PR (somewhere in the 1:33 range). Occasionally a runner would pass us or we would pass a runner but right now, placing did not matter  It was all about time.

Cresting a short but steep uphill, we began what would be the lat long straightaway before the unusually cruel hill beginning around mile 10. One female competitor in front of us stopped and was stretching out her legs. As we caught up to her she began running again. I asked her if she knew the course and when she shook her head, I gave her a brief description. I hoped it would help her get her pace back and before long she was passing up.  But then loomed the biggest hill of the course.

I have yet to run this hill at full race speed, last year helping Libby get her first marathon time and this year trying to verbally push Christy up it.  Therefore, it is hard for me to know how hard it really is.  But I do know it is quite the doozy of a hill this late in the race rising over 140 feet in less than .4 of a mile.  Christy still had a good sense of humor in spite of the hill and said: "I paid you $10,000 for this - now is when you carry me!" That definitely got a look from one runner.  I said "It wasn't $10,000.  It was $15,000" and we moved on.  One female runner who passed us near the start of this hill came into our grasp again and much to Christy's credit, she would pass her.  This effort would become important later on.

Now, after cresting the hill, we had almost nothing but downhill and flat running to go. I wanted to push Christy as hard as I could to use these downhill portions to our advantage. I had been schooling Christy in what I feel is the best way to run downhill and I was pleased to see it seemed to be working. I remembered running down this same stretch last year and just being struck by the beauty of the ocean. I have always loved the water and to come from a valley a few miles before to bursting through this section of Cliff Drive and have the blue waters waiting for you was such an awesome sight. 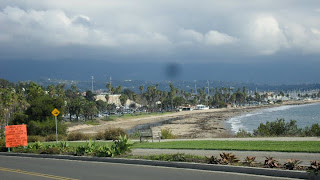 As we neared what had been the finishline I noticed we had a little ways further to go. I could tell that this year we ended in the stadium of the Santa Barbara Community College.  I have always loved ending in stadiums. It makes runners feel very special.  However, I wish we had simply ran two loops inside the stadium rather than make a little twisty-turny portion outside.  Some runners might find running a half mile or so on a track a cruel way to finish but I think it really allows people to soak in the cheers of their friends and family who can get to watch them for an extended portion here at the end.  By now, Christy was really running hard and while we would get neither her sub 1:30 nor a new PR, she finished super strong in a time of 1:34:33.  By passing that final woman at mile 11 and holding any other challengers off, she not only was able to take third in her age group but 10th overall! Awesome job Christy!

No sooner had I finished and grabbed a bottle of water then I headed over to the other side of the track to see Barb finish. Given her feelings with how her foot felt, I could only hope that she would finish around 2 hours and was expecting something a little slower.  I had barely settled myself in, clapping for the finishers (even those wearing iPods which always makes me feel like my cheering is worthless) then Barb came around the corner, smiling and cruising! She would fly around the track and finish in 1:53:32!  Fantastic work! She said her foot felt fine for most of the race and she simply had been careful not to let it get out of hand.  She had also been inspired by a woman near the end who she later found out was partially blind from a bout with cancer but was here running nonetheless.

THIS is why I run races, people!  After a day of rest and driving around Santa Barbara, Barb and I would join my good friend Yuliya whose boyfriend would take us out surfing.  The first time to go surfing for either of us, we both ate more than a few waves.   also busted up my toe pretty bad on some piece of something under the water. Totally reminded myself that when you make a good portion of your living in the running worlds it is best not to take too many risks elsewhere.  Nevertheless, we were both inducted into the UCSB ROTC Surfriders Club! That was a heck of an honor as well and the icing to a pretty darn good weekend.  Sorry the Bears beat your Bills, Yuliya!
Posted by Dane at 1:54 PM