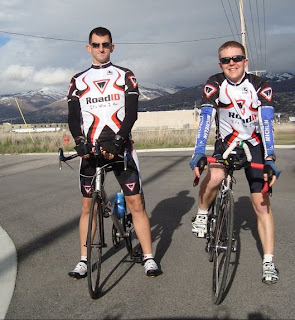 Over the years, I have experimented with tons of ways to fuel my body during an event.  With each different event comes a different challenge and a different need.  with ultra events I have found I can take my time to actually chew something.  In an ultra-ultra event, like last year's 202 mile solo run of the American Odyssey Relay, I not only took time to chew food, I got real food in sit down meal style.

However, with the addition of triathlons to my exercise fun, I have found that I need to take in an energy gel or two.  When my friend Chris White showed me a way to tape the Energy gels to my bike for easy rip-off-ability on a recent bike ride, the possibility of fueling on the go and doing so quickly was made much easier for me.

I have often been asked what gel I use the most and I am always happy to tell someone.  However I realized i had never really publicly talked about the kind I enjoy best.  Well, it is that time.

Without a doubt, PowerBar's Energy Gel's are my favorite brand.  But even more so than that, on a sub-level, the strawberry-banana flavoring is tops by far.  It is not even the flavor which is so smooth but the consistency itself I love.  While the chocolate flavored Gels provided a solid flavoring and almost chewable consistency, the strawberry-banana have a much more liquid consistency that allows for an athlete to almost drink the gel whole. 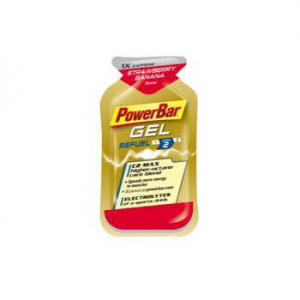 Most recently in the St. Anthony's Tri I competed in, something wasn't sitting right in my stomach.  The usual gel would have probably exacerbated the problem.  In spite of the stomach troubles, I knew I needed one of the gels I had on my bike for energy.  However, a problem arose when with about 2 miles left on the bike, I dropped my bottle filled with NUUN (another product I love).  Normally, I would not think of taking a gel pack without some sort of fluid to wash it down.  But not with the strawberry-banana PowerBar Gel!. Ripped from my bike, up to my mout and down the hatch.  *BAM*.  Just like that.

This afternoon, after an early flight and 2.5 hour drive and just general malaise, I decided to go for a run in Lompoc, CA.  Beautiful day out but I was starving.  I wanted to do about 6 miles before an engagement I have to attend (and really need to grab a shower and get off the computer and go to it!) but I did not have time for any real food. In the mouth went the PowerBar Gel (with 4 times the sodium of other similar gels- important for a heavy sweater like myself) and away I went.  I enjoyed the sun, enjoyed the run and am now ready to go grab me a steak.

So when you want to know what gel I like, look no further than good old strawberry-banana PowerBar gel.
Posted by Dane at 5:56 PM

strawberry banana is my fave too! I swear i would eat them for snacks If i didn't know better.

Used one today to add a little boost to my training :)