Rock and Roll Half Marathon Recap

After I was introduced by John "The Penguin" Bingham to a raucous crowd at the Rock N Roll Expo, I had already met no less than 10 people who had moved me greatly while I was doing a book signing at the marathon expo.  I remembered after the first half of an hour of day one of the expo, I turned to the gentleman who were working with me at the booth and told them that this weekend already had one of those feels to it.  One where there were going to fun times, good people and just a general good vibe.

Personally, I had next to no apprehension.  Not only was I not doing the 26.2 miles on Sunday, but because this was my last training run before my first Ironman 70.3, I would not be running anywhere near full capacity. There was very little pressure on me and I was even more exuberant than usual, happy to give high fives and hugs. This race was simply calm before the storm - the storm coming  coming in Boise 6 days later in the form of 70.3 miles of new ground being broken.

By the time the second day ended, I knew I would be writing this race recap about people I had met during the weekend’s events. There was not very much I would have to say about my own race, as it being nothing more than a catered training run.  And given that in more than half of the miles I had to visit the bathroom (I have no idea why I was so unbelievably hydrated), other people’s stories would be much more fun to write about.

Given my proximity to the race start, I was able to get up not too long before the start of the race.  Staying at my good friend Nathan’s made this a much easier thing to deal with.  I heard traffic was a bear getting into the start and out of the finish.  But when you have a race with tens of thousands of people shutting down a major US city what can you expect? 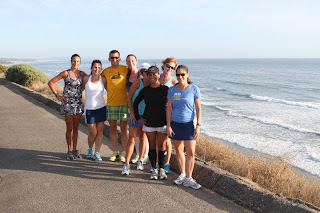 As such, given my late waking, I was barely at the corral a minute or so before the race for the wheelchair racers was underway.  That meant, however,I did get to see this flash mob break out at the start.  Pretty fun stuff.

On Thursday prior to the race, I had done a book signing and a fun run at the Running Skirts flagship store in Encinitas and made a plethora of new friends.  One of these runners, named Kim, mentioned she wished to run right around 1:35.  I said that was the pace I was planning to run and if we found each other pre-race, I would happily guide her along.  As I crammed into my corral with 15,000 other people I knew the chances of that were slim. Therefore, today was going to be about enjoying the run and running along at a good enough clip to make me sweaty.

With the air horn signaling our start my mind immediately went to new friend Robynn, who I had met both at the running skirts store and at the expo.  Robynn is hearing impaired and while I do not know the exact details surrounding that impairment, I can say heaven knows I felt for her. I cannot imagine going a day without listening to music, being able to enjoy the sounds of wind through trees or any of the other things that having this sense makes easy and enjoyable. 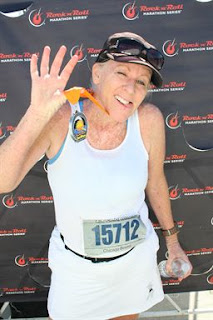 But Robynn was full of life and exuberance and made me smile the entire time I spoke with her.  I also found myself enunciating even more clearly and speaking as properly as possible when I was with her as I could tell she was reading my lips.  Like the old Seinfeld episode, I felt this ability was like a superpower. Instead of feeling sorry for Robynn I was impressed and envious of her skills. We talked, like all runners, about injuries and how to prevent them, as best as we could with her slightly muted English and my complete lack of knowledge of any sort of sign language.  But regardless of the slight communication difficulties we were simple runners talking to runners. She was an absolute ray of light and I could not have been happier to have met her.

As I mentioned previously, I was having a very active waste removal system and was topping nearly every mile.  At one point I could not even wait for a portapotty and ran off of the freeway, hurdled a wooden horse, and buried myself in a bush.  I laughed at my steeplechasing efforts just to relieve myself and thought how lucky I was to be able to handle the problem this way. Leaping and crawling and chasing are things that do not come easily to everyone.  For example, one of my newest friends, Alex Montoya, was born without both arms and one leg.

Having started his life in Colombia, his family moved to the States so Alex could have a better chance of health care and survival. As we spoke at the expo, he gave zero sense that he was one who needed help with much of anything. As the Manager of Latino Affairs for the  San Diego Padres he obviously does not let his own physical limitations keep him from exceeding. 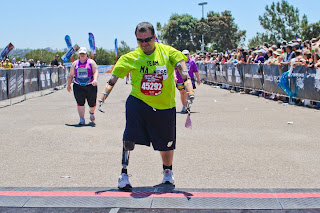 And why was he at the expo? Well, Alex was running as part of the relay.  It took him 2 hours and 40 minutes to run his 5 mile portion but he did it. I have no problem if you do not wish to run or do not like to run.  But I find just about any excuse you have about how you CANNOT run to more or less be useless after seeing Alex do what he did.

Having started in a corral that was much further back than I would have normally been staring in, and having people in the corrals in front of me who were obviously not in the right places, I was passing people left and right, even while running at a rather conservative pace.  There were also plenty of people I passed numerous times as I hot the portapotties (Seriously, it was pretty ridiculous how much I had to go.)

One runner I played cat and mouse with was a woman whose name escapes my memory right now –which is just fine.  To me she represents the masses of runners out there.  Having arrived at 1 AM because she took a flight out at 6 PM (which was the only way she could swing this trip with three young ones at home) she was about as tired as I was if not more so. (I am telling you – 6 AM race times and Dane do NOT go well together.)  As we ran together and chatted, we marveled at the speed of the top marathoners, 5 miles ahead of us and still running faster than we could dream to run.

We shared stories about how the day was going to get real warm soon and we were both happy to be running “just” 13.1 miles.  We both expressed a little unhappiness with all of the highway running and the camber of the road.  But mostly we were just happy to be out running, enjoying the day and pleased as punch to be doing something for fun that many cannot fathom.

I told her how I love being a long distance runner and being in a car seeing a sign telling me I am, say 25 miles, from my destination.  I think “If my car stopped right here, I could still be home via my feet in about 3.5 hours even while wearing these jeans.” The simple act of putting one foot in front of the other allows runners to experience many of the same highs and lows, regardless of speed. This is what ties us all together so strongly.

I was finally hitting a nice little pee-less groove.  Still barely awake my eyes came upon of compression socks sold by the girls at Running Skirts.  On the feet of those socks were a pair of shoes the Running Skirts girls like.  As I passed by the runner attached to them I saw it was my new friend Kim from the Running Skirts store who I said I would help if I could find her. 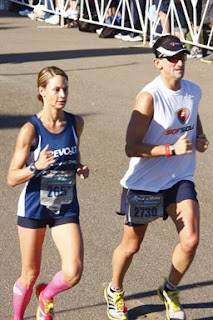 Well, I finally found her!

I bid adieu to the running representation of so many other runners and turned around to say hi to Kim. Her eyes lit up but then just as quickly dimmed. I could tell she was not having the day she was wanting.  As she had started in the coral before mine, chances are she was not close to her 1:35 pace goal as I myself was barely on it.  No matter. I told her I would help her in spite of her protests that I was "giving up my own race."  I mean, honestly, what the heck else was I going to do with my final 5k.

A few yards later, however, Kim gave me a wave of her hand and bent over clutching her knees. I turned around and just as quickly said to her: “Nope.  Aid station is 30 yards ahead.  You can walk through that.  No stopping right here. Let’s go!” She immediately began running as if I was her coach and she had to listen to me.  Grabbing two glasses of water she walked briskly through the aid station and never once walked again for the rest of the race.

The last 5k was undoubtedly tough for Kim as the temperature soared, her own personal goal of setting a PR slipped away and she had to deal with me bothering her incessantly about not giving up.  But her struggle represented the struggle of so many runners. We all want to quit at one point or another and sometimes, if it is to the detriment to our health, we should.  But if it only to the detriment of our comfort than bump that! If we wanted to do something easy and not exhaust ourselves we would spend our Sunday mornings golfing, not running. Kim finished in a time of 1:39:34.  The mother of two  has had better races and will have worse races.  That is a fact.  But I doubt she will feel better about too many others.  Why? Because she reached down and conquered her demons. She refused to give up.  Like so many of the people I met and especially those I profiled above, she has faced down some tough times and has proven to be a success.

My time? Pretty inconsequential really. 1:38 –something. I did exactly what I came to do and actually got to receive so much more. One of my slowest halfs ever was one of my most favorite.

It was so great to meet you briefly at the expo, a fellow Pennsylvania native and Penn State Grad!! I hope you also screamed "We Are!!" at the lineup of Big 10 fans/spectators along the course (and booed at Ohio State, as I may or may not have done :-P). Hope you had a wonderful time here in sunny San Diego, and maybe we will see you back next year for the Rock n Roll (or one of the many other marathons/halfs in this area)!!

Great report Dane. You are so inspiring to me!

Great report! I love to read race reports on a race I might run or just ran. I also liked how you helped Kim keep going. I did the same race (2nd half) and got a cramp after 10 miles and it killed me to walk. I needed a "coach" to tell me to keep running. =)
Thanks!
AmberRuns.com