One of the good things about criss-crossing the country is that time in the plane or in the airport allows for tons of time to read. I came across a review I had written about three separate running boks while searching for an answer to a question a friend had posted.  As such, I thought now would be the prefect time to repost these reviews as many are flying themselves to marathons all over the country this fall. Enjoy!

Recently I had three books all which were in the middle of being read. Why would I start and not finish them? Well, mostly because they were located in different parts of this vast country and I forgot to bring some of them with me when I started others!

But in my quest to read a book a week this year (and to report on the sports related ones to my readers here), I present you with these 3 gems. 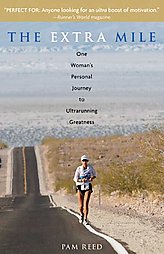 When I first started getting involved with ultramarathons, I knew two names pretty well: Dean Karnazes and Pam Reed. The two have become intertwined in recent ultrarunning history. Dean I met and became friends with a few years ago. I have not had the same pleasure yet with Pam. And I say pleasure because I think knowing her would be a wonderful thing. (Dane note: since I wrote this, I have met Pam on several occasions, had the chance to speak at the marathon in Tucson she was the director for and had a lengthy discussion with her on how both of us love to eat beef the night before the race. Getting harder to discount the benefits of lean beef when one of the greatest ultrarunners of all-time feels it fuels her or the finish.)


I did meet Pam briefly at this past year's 24 hour Ultra Centric competition. At one point I passed her on a loop (don't get me wrong; I later crashed and burned and the diva of the heat later crushed me), introduced myself and told her I was a big fan. And that was before I read this book.

Pam's is a great story. I love reading these books of women who are in the 40s or 50s now and see how much they had to struggle to even be ALLOWED to run as youths. I am no spring chicken but at 31 I can barely remember a time where girls were not encouraged to do all sorts of sports growing up. Maybe it was a NW Pennsylvania thing that saw everyone as equals or maybe my parents raised me without sexism but reading how just one generation before mine women were thought to not be even ABLE to compete in distance over a half a mile is astonishing.

Pam paints that picture, as well as her own battle with anorexia and the sport itself with lucid colors. I read in a review that "Reeds (sic) book will be an inspiration to women everywhere." Drop the gender part. It is just an inspiration.

That's what you do when you are a repeat champion of the mother of all races: the Badwater 135 mile Ultramarathon. You inspire.

Next up is a fantastic book by Kenny Moore entitled Bowerman and the Men of Oregon: The Story of Oregon's Legendary Coach and Nike's Co-founder.

Wow. What a book and wow what a man. I have had a few fans of running who are obsessed with Oregon Track and Field. It was one of those fans who inspired me to make sure that the Northwest Passage Relay team we named Postfontaine for a relay in Washington State contained the Green and Gold of Oregon as an homage. I can totally see why people were so enthralled with this man and what he did.

A lengthy tome at over 400 pages, it is both seemingly necessary and not enough to capture all of what Bill Bowerman, the coach of the Oregon Ducks track team for decades, did in his time on Earth. Kenny Moore, an Olympian who took 4th in the world at the 1972 Olympics, was a student, friend and great chronicler of the late Bowerman. (When Moore took fourth, just 31 seconds out of a bronze medal at those Olympics, Steve Prefontaine, who had earlier finished 4th in the 5,000 meter race and had initially sulked before realizing how great that was, congratulated Kenny. When Moore asked Pre what place he got, Steve replied. "I got F*ing fourth, man. It's the worst place you can ever finish." I love that part.) He writes a fantastic tale and I am sure if asked felt that his book probably had a great chance of succeeding based simply on it subject material.

More than just a book about running this is a book about life. Going back to Bowerman's grandfather traversing the country in a covered wagon, the book brings us all the way into the 21st century. It is pretty amazing what a couple of generations can encapsulate in the short life of the history of the United States.

What is ironic is that I would have loved to have been coached by Bowerman but probably never would have had a shot. Having barely broke 5 minutes in a mile, I would have been nearly lapped by some of his runner who routinely broke FOUR minutes. Plus I am much more of a road guy than a track guy and it appears Bowerman much much much preferred the oval to the hill and dale of longer races.

Nevertheless, it was what the man stood for that I admire. He did NOT take sh*t from people. GOD I love that. I also love how it mentioned that one thing you did not do was waste Bill Bowerman's time. Amen. He also said when he was wronged by someone, it was as if he "disappeared you". He wasn't angry at you (outwardly) you just ceased to exist in his eyes. That sort of conviction, knowing that his way was a good way and accepting no less from those around him, absolutely makes me admire him.

Statswise, during his tenure as track coach at the University of Oregon (1949-72) Bill Bowerman won 4 national team titles, trained dozens of milers to break the 4-minute barrier, and his athletes set 13 world and 22 American records. Single-handedly he helped turn the college town of Eugene, Oregon, into the running capital of the world.

Oh yeah, he also co-founded this little shoe company you may have heard of.


Finally, a book about running in DC. When I first moved to DC I would have never thought it was the running mecca that it is. Who would ever think that a large metropolitan area could be so runner-friendly? Well, as anyone who has lived there knows, it is a great place to run, especially if you know where to go.

The Washington D.C. Running Guide provides "the 38 best routes in the DC area."

I don't know if that is true but without a doubt it provides some great information for the newbie to town or the long time runner looking to tie some long runs together. With course ratings and descriptions, it provides runners in all parts of the Beltway with a trail or route just minutes from their door.

The cool thing about reading this after living and running DC for 4 years is that I can see where these routes go and imagine the times I have run on them. I can also add my own to the mix and I am sure there are dozens more I don't even know about. It might even be a good book to turn to to create a race, or find an ending to a course.

Having been published in 1999, there are obviously some things that have changed but but for the runner looking for a beginning guide, this is your book.
Posted by Dane at 8:59 AM