City of Trees Half Marathon Recap

When I finished my Dane to Davenport and took on the Quad Cities Marathon, I was quite spent.  I flew home the next day and did not run.  The day after that I did no exercise at all.  After that, a break of all of two days, I started running again.  Slowly, deliberately. I was participating in the Oregon Half just five days after the Quad Cities Marathon and was expecting to slog along like a slug. I did far better than expected.

The next week I was supposed to be in Rapid City but the horrible snowstorm there caused the cancellation of the race.  Instead, I stayed in Portland and had an awesome run with Bill Rodgers. It was quite a joy. 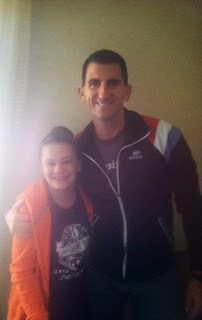 When the weekend ended, I realized that I had run every day since my two day hiatus and was feeling fairly spry. As I geared up for the City of Trees Half I thought I might be able to bust out a decent 1:26 or so even though I had run a very high for me 70 miles per week for the past two weeks. Finally, the day of the packet pickup, I would take a "break" from running - by sitting and talking to runners for 9 straight hours. Not an ideal way to rest but a wonderful way to meet new people, like my new friend Paige.  Paige and I share a love for the Chicago Bears. Me, because I have followed them my whole life; her, because her cousin plays for them.

But soon, the expo ended and I was on my way to a firehouse in Boise to scream at the uber-exciting Penn State-Michigan game with my host for the weekend. Then it was time for some dinner. Finally, long past the time I should have slept, I turned out the lights.

I can only say that I am inexplicably happy the race started at 9 a.m.  Otherwise, I would not have made it.  I plain and simply did not want to get out of bed. If I didn't already have to be out of the bed to drive home that day anyway, I might have slept until noon. I finally drug my carcass out of the sack and headed to the starting line.

One of the many extremely nice things about this race are the little touches. First off, having ample amount of parking not only right across the street from the start/finish but all around the area was a nice touch. Usually I am fortunate enough to have lodging close enough that this is not a problem.  However, I had to drive a bit to the race and my usual wake-up-ten-minutes-before-the-start routine wasn't going to cut it this time. So to have this parking nearby was a treat.

With the temperature a crisp 39 degrees but not a cloud in the sky, I knew it was going to be some good running weather. I wouldn't mind some cloud cover but oh well.

The race profile (and my Timex Run Trainer) show that we gradually went uphill for these first 3 miles but if so, it was imperceptible. A group of 5 guys shout out of the blocks and so separated themselves from all of us.  A few other runners fell in line in little packs and then there was me. I knew the change in elevation to about 3,000 feet would add a little challenge to my now-sea-level lungs but the first mile felt great.  I moved my way up until I was now just a few dozen yards behind the lead pack of five.  Maybe I would have a good day after all.

I felt a slowing in the next mile and the top female slid past me. I was surprised by the time at the next marker and assumed the 3rd mile would make up for the difference.  But it was even further "off" if you will. Maybe I was just going to run slow today and this was going to be nothing more than a hard (not very-hard) workout.

Somewhere in between the 2nd and 3rd miles, a runner passed me just booking.  He ended up barely taking second place which makes me wonder what he could have done if he had not seemingly started so far back. One of the many things I like about longer distance road racing is all the thoughts that can go through your head.  You don't get that in a 400 meter.

I knew the next three miles would contain the last of whatever remaining uphill was on the course and was hoping to push a little harder to get through.  Right after the 4th mile I had one runner pass me. I said to myself I would hang with him for at least a mile and see what I could do.  Another runner crept up and I could see his shadow behind me. At this point, we were on the longest straight section of the race- a paved road that had very little traffic but not the widest shoulder in the world.  I think this kept the trailing runner from pushing too fast initially. However, he finally made his move and passed both of us.  The runner directly in front of me followed and I followed him. This wa the first time I felt like I had been racing in quite sometime.

I was without a doubt happy I picked up the pace or at least stayed with these runners as my actual pace was declining.  Who knows how slow I would be running if I had not had them there to pull me along.

Up ahead was the big hill of the course.  As we began up it the lead runner pulled away and the runner in front of me slowed.  I have never been very good at running flats and uphills hurt me too but I seem to be able to handle them better than most. I used this opportunity to slide past him and back into what was 11th place.  Maybe I could get top 10 overall. 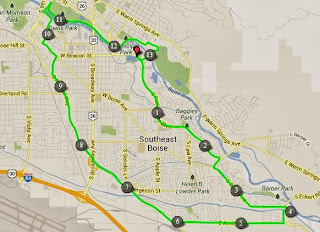 At the top of the hill, a sharp turn took us onto the bench of Boise looking down at the city below. On this bikepath, a portion of which I had run to finish the bike portion of the Boise 70.3 I felt like I was finally feeling good.  As per usual, it takes me 6 miles of running to feel like I am conformable and not going to retch and die. I might not have speed and I may not enjoy pushing hard for the first few miles but if I am going to make the recovery from all this ultra stuff and be "fast" again, well I am going to have to learn how to push it
sooner than 6 miles.

Right then, at the aid station, the runner in front pulled over to get a drink.  I passed him and moved back into 10th. I felt great and knew we had about 3 miles of gradual downhill to go.

As we began to start the descent, there was a quick and fast downhill ahead. The runners behind me had made up ground and even though I still felt like I was pushing the envelope I was just barely keeping the miles under 7 minutes. As we pushed it hard down this first hill, I felt a sudden soft stabbing pain in my right glute. I immediately pulled up.

The pain only lasted a second but the psychologically damage was done. It is the same leg in which I have been having little troubles with this year and anything on that side freaks me out. My slowdown was so sudden both runners looked at me and asked me if I was OK.  This sport is so awesome. Entrenched in combat one second, caring about the health of your combatant the next.

I said I was probably done for the day and have a good race. I sighed inwardly. Then about a mile later another runner passed me.  I kept him within just a few yards for a while and then his lead changed. Suddenly, I decided to try something different.  I had been experienced heel pain on and off this year and as a result had been running more on my toes. I decided to say screw it and just begin landing the way I had always run.  It was like I was a different runner.

My speed increased and I cruised pass this runner.  I flew down the remainder of the hill and could see the two previous running partners up ahead. Then the glute reacted poorly to this increased pace and I knew this was time to stop pushing.

In spite of the downhill I knew there was no reason to push it. In fact, a short and steep donwhill had me more than wary as we left the bikepath and headed through a quick couple of turns.  Before too long we were passing onto the west half of Boise State University. A few spectators were out but I am pretty sure that they had zero idea they were watching a race. No matter - I barely felt like the effort I was giving was worth watching. However, while I was not exactly burning up the road, I hadn't fallen too much further behind the guy in front of me.

A quick out and back in Julia Davis Park allowed me to see I wasn't really that far behind a few of the other runners as well.  I knew with just two miles to go it was going to be tough catching all of them but maybe some could be nipped.

As we ran along the Greenbelt which followed the Boise River,  I noticed that while this was not part of the Boise 70.3 course (it was close) I had run here previously with another friend. Familiarity helps breed so much strength. This strength suddenly saw me pulling closer and closer to the runners in front of me.

I then heard the soft pitter-patter of super fast feet. Behind me, Carlos Trujillo, a runner I met the previous day who was running the marathon, was beginning to fly past me. Starting the marathon an hour earlier than we started the half, catching me here means he was going to run well under 2:30. For Carlos, who has a 2:14 to his credit, this was merely a hard workout.  It was rather humbling to watch his slide by like a spirit knowing he had already run 13 more miles than I had.  But it spurred me on and with a little over a half of a mile to go, I slipped past one runner to  put myself in 12th place.

With the sun shining down and the temperatures in the mid-40s, the weather was absolutely gorgeous.  The only remaining thing to be seen for me was whether I would break 90 minutes.  However, when I hit the 13th mile I could tell that wouldn't happen. So I high-fived a few kids, waved to the spectators lining the course and cruised in to 1:30:45 good enough for 11th male.

All told this was a very well run race. The shirt for the race was a wonderful fleece-y pullover. Warm soup was available for the runners post-race. I mentioned the parking situation earlier and the volunteers were aplenty and very helpful. Kudos to the people at Blue Circle Sports for putting together a very well-run event. If you haven't made it to Boise to check out this race, I would recommend you do so.

As for me, in my 71st lifetime half-marathon I got in one solid workout.  I am pleased for the most part where my recovery is going and hoping to continue on this trajectory this weekend at the HITS Oklahoma City Half Marathon.
Posted by Dane at 9:39 AM