Two races into the year and I have already had better weather for both of them than I have for the vast majority of my races for the past two years.  That can't last! Of course, it is all relative.  One of the organizer for the race shared with me his story of talking to some of the elites athletes in a pre-race meeting.  Speaking in both English and Spanish, he said those understanding him in English were probably quite happy with the cold weather; those listening in Spanish were probably going to want to bring mitten and a scarf.

What will make he headlines for this race is the fact that it was the coldest Miami Marathon ever as well as the closing of the MacArthur Parkway in both directions for the first time since the filming of Bad Boys 2.  Whatcha gonna do?  This change in the course was facilitated by some construction the the Venetian Causeway which was always one of my favorite parts of the race.   This meant that runners would twice have to cross the Parkway mentioned above which meant some decent sized hills both coming and going.  Not ideal but hardly a bad thing. 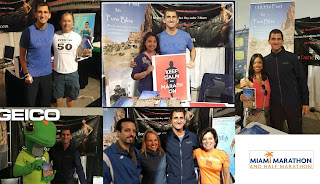 I have run the Miami Half or Marathon previously on five occasions, including in 2006 as part of my 52 marathons in one year.  I have almost always been doing something which required a lot of extra energy.  This time, however, I would "only" be running the race.  That doesn't include working the expo with a book signing the two days prior.  Always invigorating, it is also rather tiring.  Far from an ideal way to ready oneself for a race but worth it for all the wonderful people I get to meet. Even the rather rude, uncouth ones make for good stories later.

As predicted the temperature was a record-breaking low of 47 degrees at the start line. I was in heaven.  While I knew the wind that was present would make things difficult, I was just so pleased it was not the typical hot and humid weather I deal with in Miami. I was dressed in nothing but my ASEA singlet and shorts; everyone else seemed to be dressed for nuclear winter.

I was hoping to pace a friend but our different corrals made it impossible to find one another.  I assumed since I wasn't expecting that fast of a time that she would eventually pass me and then perhaps we could run together.  In the meantime, I was just carefully trying to keep the increasingly invigorated running peeps from bumping int my broken hand.

As the dance music pumped, the electronic voice counted down and the flare guns shot into the sky (one a little low helping me get out that last little pe I still had in me), away we went.

Regardless of the changes, the beginning of this race stayed the same as always.  Run for about a quarter of a mile from the American Airlines Arena, make a left onto the Parkway and climb a hill.  Soon after cresting that hill, slide down the other side, past the first mile and under the shadow of huge cruise ships in harbor. Well, you would be under shadow if it was not a 6 a.m. start and it was pitch black for the first five or six miles. This is not a complaint. Anytime you can run NOT in the sun in a marathon or half is a good idea in my book.

My plan was to take the first 3-4 miles at a 6:42 pace which would keep me right around 1:28.  If I felt god, I could pick it up later and slide into the 1:27 range. As I picked my way through a few runners, and a few passed me, all systems were go.  Even climbing the big hill of the parkway and going back down it, my miles were solid.  Even the climb back up the parkway and back down it again to South Beach went according to plan. I recalled running this race numerous times before and being completely drenched in sweat by this point.  The cooling wind was a welcome respite.  It was time to hit the beach. 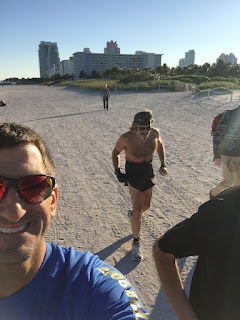 One of the things I always look forward to seeing as I hit the fourth mile on South Beach is the always present Raven, Robert Kraft. You may have read about him as the man who has run the stretch of beach on South Beach for the past 40 years without missing a single day.  Later, after running this race, I would join him for the 5th time. That run would be his 14,999th in a row.

Raven quietly protests this race and I am not exactly sure why he does.  As I am a fan of the race, I don't look forward to his protests. But I do look forward to seeing him out there. Unfortunately, it appears I was running a tad too quick for him and ran by before he set up shop.  Luckily we would catch up later and I would grab a quick photo with him prior to sharing the beach with him.

This section of South Beach gave us an idea of what the wind was going to be like later. While cooling, it was rather strong and on a few occasions a conga line of runners formed. On other occasions, some runners would run three abreast and I was only happy to run behind their wind break.

Even though it was now 6:30 in the morning, some ladies were just now making their way home from their all-night reveling.  As they looked disapprovingly (or drunk, I am not sure) at us scantily clad runners, we looked back the same (maybe not drunk) at their scantily clad-ness. When one shouted out to us "Run Faster!" I replied with "Make better life choices!"  This got a hearty laugh from the few runners around me.

The sun was finally popping up over the Atlantic just as we turned off of South Beach and began to make our way across the Parkway again. As a few runners here and there took up a spot on the road on my side, thousands steamed en masse on the other side.  I saw my friend Scott Douglas pacing the 4:05 group and shouted out some encouragement to him. Scott is the one who helped set up my record-breaking fastest known time for a marathon on a cruise ship two years ago on the Crystal Cruise line.  I may just be attempting something similar to that again this year. Stay tuned! 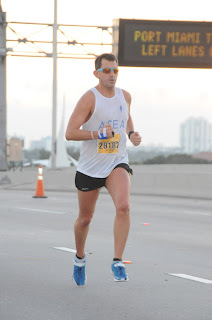 The climb up the hill on the parkway seemed far greater than its descent over just four miles previously. I had now settled into a solid groove.  My times had slipped from 6:35s to 6:45s which gave me some food for thought. I have a PR much faster than what I was currently running.  I had just ran the Louisiana Marathon a week ago.  My achilles was protesting ever so slightly. While I wished to give a solid effort, I had to decide if there was any real difference between trying to run a 1:27 or a 1:28.  I decided that I would simply see what the wind and the other hill on the parkway would decide for me.

The wind decided I should slow down a bit.

As we filed into one long line of runners, occasionally one would make a break and quickly get overtaken by the others. One female runner, however, was doing an excellent job of shake and baking Ricky Bobby style. She would tuck in behind a taller runner and seemingly get some energy before slipping around and tracking down the next runner.  I did my best to stay with her until I realized she was going faster than I felt was prudent for me.  Even as she slipped off into the distance, I enjoyed watching her race.  It was an excellent use of what was available to her, especially given the windy conditions.

I always like how running can allow you to observe these small tactical things which someone observing would never notice. As we are not confined to a small field or court, it is hard for anyone watching to see anything more than just a few yards of the event, unless there is a constant feed from a motorcycle or helicopter.  For sports fans who think that running is nothing more than just trying to move legs as fast as possible they would probably be very surprised to know about all the little things which go on during a race such as this.

A runner I had been playing cat and mouse with here passed me on this final uphill. As I had on three previous times, I expected to pass her on the down.  Lorna (her name was largely emblazoned on her front and back - the latter was confusing to me) did not yield this time. In fact, even as I passed others she seemed to gain strength. All I could do was watch.

This section of the race has always been an exciting one for me.  Right around the 11th mile, we enter what I call the Miami Sound Machine. A large contingency of Cuban, Puerto Rican and other Latino fans usually created a line on both sides a few deep, cheering and singing and ringing bells.  It always pumps me up. However, it was severely lacking this year. I mentioned this to a friend who lives in the area and he said "This was like arctic weather to them. They won't come out without a snowsuit on in this weather." 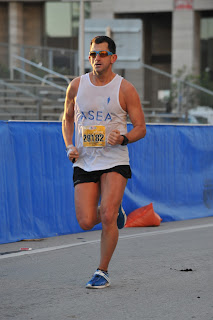 Rounding through the final turns of the race I could see it was going to be close.  I had one female runner pass me and another male runner get passed by me.  At this point I was racing neither of them and only cared about the clock. With .1 of a mile left I could see it was going to be rather close but I should be able to slip in under the clock. My friend and announcer Jeremy Pate gave me a great and resounding shout out and  pumped my hand in thanks. I saved myself a few seconds to do this with my nice surge at the end and finished in 1:28:56. This was good enough for 142 out of 14,485.  In fact, it was my fastest Miami Half Marathon ever. Even with the addition of the hills and a pretty wicked wind, I had run a half decent time. I was pleased.

As with every time I have run this race, I was amazed at the organization for so many runners ina city that is not exactly known for getting things done in a timely fashion.  Beach time they call it.  But virtually everything went off without a glitch and I remembered why I almost always find myself in Miami in January to run this race. I'd highly suggest you do the same!