I prefer not to run with my phone. Occasionally I would run with an iPod Nanon when I would do a long lonely ultra.  Since moving to Austin, I can count on one hand the number of times I have worn a shirt because of cold weather.  Gadgets are fun but for the most part they just get in the way of what I want to do: run.

However, when I see a product that just seems like it will be a gamechanger, I have to check it out. The one which came across my view the other day was the Yanky Sport Hanky. Meant to be used as any other hanky to wipe away sweat or to stop your nose from running, the Yanky has an ingenious little feature - you don't have to carry it!

Attached to one of those retractable zipline things so many people have on their ID carrier, the super soft and compact Yanky allows you to clip it to your shorts, pull, wipe your face and then just let go. No litter. No searching in your pockets (if you have them) for a rag. No worries. (Click here for a quick video.)

The aforementioned moved to Austin last year had me discovering sweat glands I never knew existed. It also took me back to when I first started running marathons and I would carry a regular old 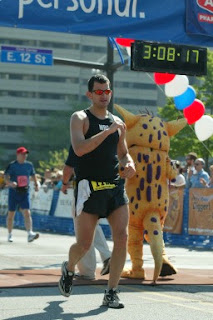 washcloth with me. I needed anything to wipe the sweat off of me to help the cooling effect.  It was effective for what it was meant for but the retucking it into my waistband and needing to pull it back out again was tiresome. So, on more than a few runs here when the temperature and humidity has been off the charts, I took the Yanky out for some test runs. To say I was impressed would be an understatement.

Created by one man in Canada, the Yanky was something I simply had to be a part of. I reached out to creator Ryan Jacobson and we have been talking for a few months about how to make that a reality. I believe in this product so much, I am hoping to not only become a user but an owner. That is how good it is.

N.B. This is not just for runners but is loved by golfers as well.  I took it for a hike in Utah the other day and loved it just as much then.  The hanky is actually a bit smaller than I was thinking it would be and that made it all the better.

The Yanky is made out of Bamboo and Organic Cotton with a velour finish. Super absorbent, quick to dry, ridiculously soft, and durable. You can tell right away that this can handle the rigors of sweat and snot and everything else thrown at it.  Heck, it was made in the wintery netherlands of Canada!