As I approach my 103rd Marathon at the Manchester City Marathon, in New Hampshire, I shake my head at two things:

A few months ago I was planning on being elsewhere this weekend. I had the registration form all filled out for the Javelina Jundred, which I wanted to be my redemption race for needing to bow out at mile 87 of my first 100 back in 2007, at the Old Dominion 100. Something stayed my hand on sending in the registration form, and then when I had the run in with the left bumper of a car in August, the rest of my year was throw all a kilter. Could I have still run this 100? Sure. Would it have been in a time far less than I would have wanted it to be? Definitely.

Around that time, not even looking for another race to fill the weekend, I receive an email from Bill Rodgers asking me about my fall schedule. We were planning to next see each other in Jackson, Mississippi for the Blues Marathon but he was wondering if our paths would cross before then. 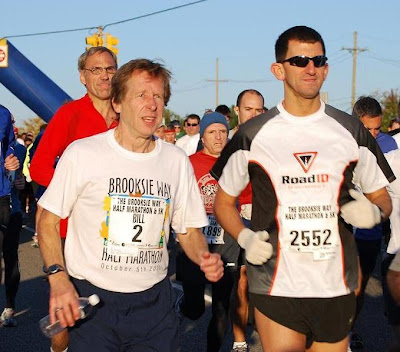 Lo and behold, Manchester City cropped up on the open date. A few emails and phone calls later and I get to not only spend time will Bill again (which, if you aren't learned in the history of Marathoning, is a little like being a basketball player who gets to shoot hoops with Michael Jordan) but knock off the state of New Hampshire from my states-to-run-a-marathon-in list!

On a completely different note, I like that the Manchester Marathon has a 6-hour cutoff time. It does not take much perusing of my blog to see that I am all for anyone getting out there and exercising. It also does not take much more digging to see that I am even more in favor of challenging ourselves to get better. Having a 6-hour cutoff is a generous time for a race to be open and if you are unable to complete the race in that time, I think it is good to WANT to get to the place where you can. Then the next goal should be 5 hours. Then four. And so on. There is not a thing wrong with being in a certain time or place in one's racing or training. But I do think it says something about you if you have no desire (or don't want to put forth the effort) to get better.

To help get the good word out about this race located in a city ranked 13th in a list of the 100 best cities to live and launch a business in the United States, I will be doing some spots on both local radio station WZID as well as as the Channel 9 TV's WMUR. When I know more about the exact times for those shows I will post them on my twitter account.

Love the blog, love the pic of Bill Rodgers. I have always been a big fan.

As an Iridium-level Marathon Maniac member, I have to disagree with you on the marathon cut off times. My very first full marathon time was six and a half hours. I injured my knee in training, so I could only walk the marathon. There were LOTS of people behind me; the Phoenix marathon allows eight hours to complete it. I met people who were over 80 years old, who only plan to walk. In what would have been my first and last marathon, these seniors inspired me!

In other marathons I’ve met members of a national arthritis “just move” group, who are only capable of walking. I’ve also run into other local clubs of “get in shape” walkers with the sole goal of finishing the big distance – by walking. The Galloway run/walk method has brought large numbers of people into the sport who could never run 26 miles non-stop due to injuries.

Yes, it’s great to be fast. But you’re young and healthy. Not everyone is so lucky. Are you going to deny others the feeling of accomplishment of completing a marathon? Of feeling the enthusiasm of the crowd cheering them on? Of achieving a life goal?

Every year the local news interviews the LAST person to cross the finish line at the Phoenix marathon. Last year it was some overweight guy finishing right before the eight hour cut off. He joked about how “it never seemed like it was going to end”, but he was so grateful he made it. I can guarantee you that THAT LAST GUY on the local news inspired MORE people to take up running or get in shape than any of the elite runners.

Sure, once you’ve finished a slow marathon you can keep working towards a personal best and improve. Some of the examples cited in the NY Times opinion piece such as stopping for lunch were over exaggerated. That’s the exception, not the rule. The slow runners/walkers I meet are really trying their hardest set their personal version of a fast pace and finish as quickly as possible.

The second marathon I ran last weekend had a five hour cut off time. The race organizers facilitated slower runners by having two early starts (a two hour then a one hour head start with special notation on your race number).

Limiting marathons to only the fastest runners will exclude three major groups of people: those just beginning fitness goals (adult-onset athletes) , people with injuries or chronic diseases (such as myself by the way), and older marathoners. Take it from John “the Penguin” Bingham. “A person can find their joy in the challenge of reaching their own potential, whatever that is. Can people who finish last in a race be athletes? Yes, they can. And yes, they are. Waddle on”.

You make some very good points but you also missed mine. I did not say that every marathon needs to have a 6 hour marathon cutoff. I am saying that it is ok that some marathons have that cutoff time.

It is wonderful that people are pushing their boundaries but I don't think you can guarantee that the slowest person inspired more to run that the fastest. People get inspired by many different reasons.

More so, there is nothing wrong with having a cutoff. Sure I am "young and healthy" which in your statement means that I am therefore by default "fast". But even when I was young and healthy and probably still "fast" by your definition, it took me five marathons to qualify for Boston. Should Boston be allowed to deny me the accomplishment of completing their marathon? Damn straight. Why? Because there are other marathons out there with less stringent time cutoffs. I could run those races instead. Same thing with the 6 hour cutoff. If you can't make that cutoff then go to another race where the cutoff is less stringent. Once you get below the 6 hour time (which, I still say is a generous time limit to run a marathon) come back and run that race. Now you have conquered two goals: the completion of the marathon distance itself, as well as the time goal that was there which inspired you to run faster.

Just as you guaranteed something I can offer proof that setting stringent guidelines motivates more people to challenge themselves then do less stringent. How? Look at Boston itself. In the last 60s and early 70s when the numbers were getting "too high", Boston added a time limit to try and curtail the race numbers. Immediately numbers skyrocketed. Why? Because people wanted to meet those cutoff standards. I can also guarantee you that if Boston opened its doors to all runners, it would soon, maybe not immediately but soon, lose a great deal of its luster. It is no wonder that so many people who run Boston run far slower than their Boston qualifying time. The goal is more often than not, not to RUN Boston, but to be ALLOWED to run Boston.

The world is filled with just a little too much of those who feel they are entitled to everything. You ask me if I am going to deny those some from..."feeling the enthusiasm of the crowd cheering them on? Of achieving a life goal?" Well, unfortunately LIFE often denies us of the crowd cheering for us or from achieving something we very much want. It is an unfortunate fact of life but one me must accept.

Your quotation of The Penguin refutes nothing I said. Of course those that finish last can be athletes. Never once inferred that they might not be. Limiting marathons to the "fastest" runners, as you mentioned, will only exclude certain runners until such time as they can join that group. If they cannot join that group it is unfortunate but life can be a bitter pill to swallow.

Thanks for your opinions!

I must have mis-read or mis-interpreted your post. I agree with you that not ALL marathons need to be open longer than six hours. For example, the Tri Cities marathon advertises that the course is only open 5 hours. I thought you were advocating shortening marathon times as a rule.

There is certainly much more sense of motivation and subsequent accomplishment when running an elite race where you need to qualify such as Boston or Xterra championships. There's certainly room in the sport for more qualifying or elite events for us to strive for.