This past weekend at the Marine Corps Marathon I had the good fortune to cheer on a good number of friends and acquaintances. One in particular really stuck out. I had thought about mentioned Ted and Brandon Kucowski in the previous blog but decided they deserved their own little spot.

The social networking sites all around us are allowing people to become friends with people they have never (and in some cases may never) meet. There are obviously pros and cons to this which is not the point of this post. The point is to talk about a pair of fellas I met online named Team Brandon. 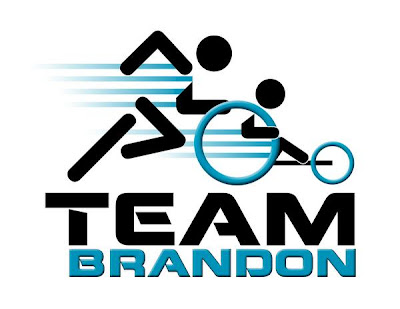 This team is not your usual team. No, Ted and Brandon Kucowski are father and son. Ted, a triathlete and Brandon who, because of Schizenchephaly (a disorder in which the corpus collosum is undeveloped in the brain) has poor gross and fine motor skills and is a spastic quadriplegic. 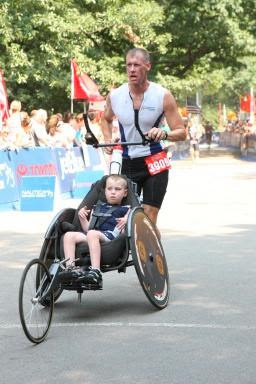 "Brandon’s parents, Ted and Jennifer found out about Brandon’s disability when he was six weeks old. A doctor told them that Brandon would never be able to function on his own and suggested placing him in a home so that they could move on with their lives. Devastated over Brandon’s disability, Brandon’s parents vowed that they would not abandon their first born by placing him in a home. The first four years of Brandon’s life were not easy, he constantly cried and was always uncomfortable. One day his father Ted took him out for a short jog around the block in a baby jogger. Brandon was soothed and relaxed from the feeling of the wind in his face and motion of moving forward. Soon after, they entered a 5K road race together. During and after this first 5K road race, Brandon showed something that his parents hadn’t often seen, a smile on his face. Brandon enjoyed being involved in something with other people."

Team Brandon is not the first father and son team of this nature to show us the power of sports . Many have heard of Rick and Dick Hoyt who have undergone similar trials and tribulations. And what I sincerely hope is that Team Brandon is not the last to shine light on how athletics can lift us up above so much of our daily troubles.

On M street at the MCM I ran with several of my friends to add encouragement to them and excitement to me. I was fortunate enough to see Ted and Brandon and joined them along the route. I received this email from Ted a few days ago.

"Dane, It was great to meet you at the expo for the Marine Corps Marathon this past weekend. I was honored that you took time to run with Brandon and I for a few moments during our race. This was our second marathon and the most challenging, but definitely the most fun and memorable. Best Regards, Ted Kucowski"

Well, Ted, you have it all wrong. It was me who was honored to share just a few hundred yards of your marathon experience with you and Brandon. I hope to be able to do it again sometime really soon. 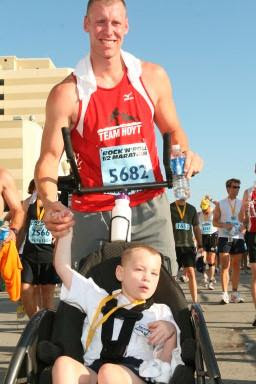