It is rare when I am at a marathon, or nearby and not running it. In fact, a brief thinking backward has me recalling only three such instances.

1. Drake Well Marathon 2009 - I was the race director
2. Potomac River Run Marathon 2008- I was helping run the race
3. Women's Olympic Trials 2008- I am neither female or an Olympic hopeful (expect for in the strictest definition of the word "hopeful").

However, even though the MCM remains one of my most favorite marathons ever, I was not going to be running it this weekend. I knew I would be stretched thin in the week prior to the race doing many other things previously mentioned HERE and with 6 straight marathons on the horizon I had to decide to not run the race. Probably a very good decision but I sure would have loved to run my 5th MCM. 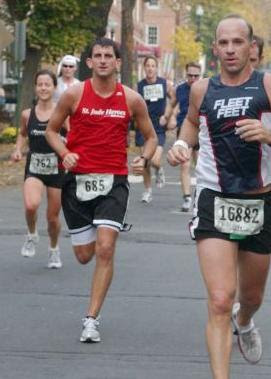 First MCM in 2004. Before I learned a harsh lesson about humidity.
And proper running gear. 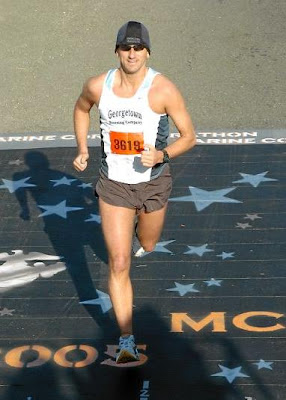 Setting a PR right before Fiddy2 began in 2005. 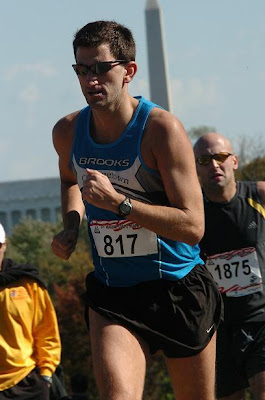 One week after setting a new PR, I ran my second fastest time ever in 2006
(my 43rd marathon of the year.) 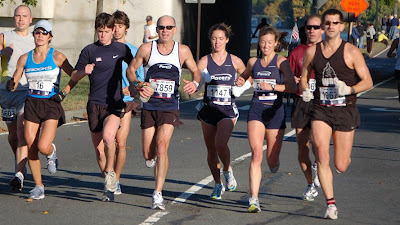 It was a touch decision but the right one. I gave an interview on LestTalkLive about my upcoming 204 Mile Relay on Thursday.

Later on that day, I then did a book signing and led a fun run at the Lululemon store in Logan circle, set up by my good friend, Elyse. It is always fun to converse with and meet fellow runners and that night was no exception. 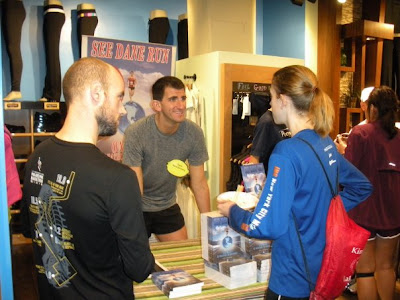 After two days of book signings at the America Odyssey Relay booth (was originally schedule to be elsewhere but it just made more sense to work with AOR) and promoting the race I will be doing there in April, I was trying to decide what sort of running I would be doing for the race. I fully intended to go onto the course and cheer people on but did not know where and when.

On the metro ride home, lo and behold I ran into a old law school classmate, John Cherry. John and I randomly ran into each other in the Pittsburgh Marathon as well back in May so this was a another happy coincidence. One of the last time we ran into each other, we did so literally, in a rugby game back in law school. One messed up mouth and jaw (him) and one bloody head with staples in it (me) later, we vowed to never try and tackle the same guy at the same time again. Well, as I had decided I was going to run part of the course and cheer people on anyway, in talking to John, I figured I might as well do so with him. We planned on meeting at the Key Bridge and I would traverse a few miles of the course and try to regale him with my witty banter. I would then stop at the Lululemon store on M Street (as requested by the nice ladies at the store) and cheer people on for the remainder of the day.

So it was set and for the fourth early morning in a row (Saturday I had been a guest on MSNBC) I was off an running. Taking a winding route from Alexandria where I was staying, I ended up in Rosslyn in time to see both the leaders and the wheelchair racers go by. On top of that, I saw a sight-impaired runner with his guide and a plethora of running friends, some I had just made the days before while at the expo. After seeing John run by I calculated how much time I would need to run to the Key Bridge and not miss him and away I went.

On the Key Bridge, and back in Washington for the first time in over a year, I realized how much I missed DC. Or, at the very least, running in DC! I most assuredly do not miss the parking, traffic, or ridiculous cost of living. DC is really the reason I got into running. With a trail system that stretched for miles in either direction directly in my backyard, I vividly recall thinking how easy it would be to get back into running here. And when Runner's World ranked it one of the top running cities in the nation, they did so with good reason. 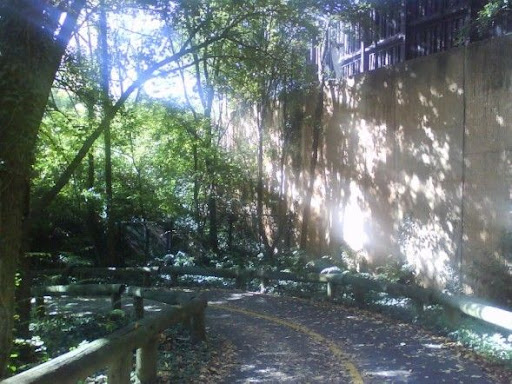 This picture is taken one half of a mile from my backyard. I loved the Custis Trail!


Joining John, and his fellow Marine Matt who was running with a pulled hamstring, I made a few jokes about their toughness. Obviously, as they are Marines, I was kidding. (Seriously, guys. Please do not kill me.) When we somehow missed John's wife as a spectator on the Key Bridge, I pulled out my cell phone and offered to call her. After she answered, we told her she had to hurry over to where we were as John was in serious trouble. *long pause*. Just kidding, he is fine and will see you around mile 16.

As we ramped around the Georgetown Reservoir and I recalled running this little loop in the opposite direction here back in 2007. I saw the Foxhall Road, which I drove to work for over three straight years, which was probably one of the nicest more scenic commutes anyone could have in DC. We turned back onto Canal Road and approached Georgetown where I then left John and Matt to fend for themselves. Was great running with them but hey, I didn't sign up for the marathon so I wasn't going to run any more!

It is definitely an entirely different beast to spectate a marathon, especially one of this size. As I joined the revelers on M Street I was definitely itching to be running the race. I curbed that desire by continually either finding friends in the crowd and running with them for a few blocks, or being said hello to by people who recognized me from the expo...and then going to run with them for a few blocks too! 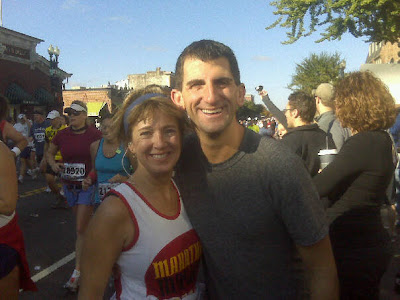 It was a great experience to be back in DC and to feel what the other side of this huge marathon feels like. I also hope to never have to do it again, because if I am in town when this baby is on, I need to be running it!

Congrats to all my friends, almost too many to list, who had personal bests on this course and also a heart congratulations goes out to all who toed the line and pushed themselves to their limit!

Awesome post Dane!! Thanks so much for hanging out in DC, especially at lulu!