There is something rather amusing about attending a movie and presentation showing in Park City, UT on the last day if September, wherein the residents have all gathered to speak about how global warming is affecting us all and how the snowfall will continue to decrease each year unless we do something about our habits (none of which I am actually disputing)...when there is a raging blizzard going on outside.

On September 29th, around 9 PM, I went for a little jog simply because I felt good and wanted to do so. It was 81 degrees out. But there was this odd feeling in the air. A brisk wind did not even nip at the skin as I ran shirtless, enjoying the very warm evening air. However, even if the weather forecast was not calling for a precipitous drop over the next few hours, one could tell the weather was changing. I honestly believe that farmers, runners and lifeguards can tell what the weather is going to be better than even the most acutely sixth-sense dog.. I have been two of those three (here's a hint: I don't won a pitchfork) and my Spidey-sense was tingling.

Fast-forward to 12 hours later. It was now 37 degrees in Salt Lake City. Ouch. Not quite ready for that, Old Man winter! Now I know that Park City is always a little cooler than SLC regardless of the day so I was a little wary about taking my Crossfire up into the mountains. It is no secret the Crossfire does not like the snow.

Don't take my word for it. WATCH THIS.

But even with bad weather aside, I was quite pleased with what I had accomplished running-wise in September. My love for numbers is well-documented and when earlier this year I did not break 200 miles (getting just 191 miles in April) for the first time in a month for well over a year, it bothered me somewhat. I try not to get obsessed with numerical milestones but 200 miles had become the minimum of what I would run per month. Then after cresting 200 again in May with just 211 miles, June followed with only 174 (with 62 coming on one day at the Sawtooth Relay!), July was at 186 and then poor August just crested over 90 miles (all because of taking 2.5 weeks off from getting hit by a car.)

So when I finished my evening warm run on the 28th, I casually looked at my spreadsheet and saw a measly little 7 miler would have me topping 200 for the month of September. I most assuredly thought I was nowhere close to 200 miles. So one day and one 7 mile run later, I had my 200 miles.

But during that 7 miles I wondered if I had not gone for the night time run the night before and would have need an 11 miler on the last day of the month if I would had done it. Seven miles was what I was planning to do on Wednesday. Would I have added 4 more for the sake of reaching 200? I came to the conclusion I would not have. There is basically no difference between 196 and 200 miles in one month. Running 200 miles is not going to turn me into an Olympian. Heck, some run close to that in a little over a week! I find that way too many people do get obsessed with their miles and really do need to take a step back and realize quality will always trump quantity. It is always better to do a little less than you should than a little more.

Over the next 10 days it is supposed to warm up again here in the valley just west of the Wasatch Mountains to the mid 60s. Chances are it will be get even warmer. That is weather for you. Nothing special about it here in Utah even though I have heard about 14 times "Welcome to Utah weather!" I have traveled all over this country and everyone seems to think that their weather needs the phrase "If you don't like it, just wait around a few hours and it will change!"

Well I don't like snow in September and darn it, I am going to pretend that Utah weather is super duper different and gets back into the 70s soon. But that is the great thing about running. I may have to bundle up more and I may be more uncomfortable. But it is going to take a great deal more than a few snow flurries and brisk temps to keep me from my run. 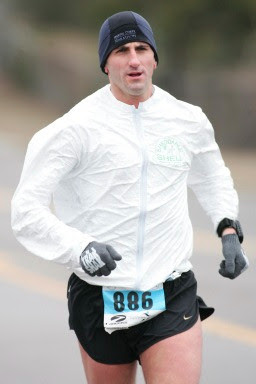 Unless, I am, of course, stranded somewhere in my Crossfire.