I am going to clue you in right now. The title of this blog is horribly "pun"y. But you will forgive me when I am through.

I have known my friend Jenni for close to four years now. When I did my 52 Marathons in 52 Weekends, she was kind enough to host me at the San Francisco Marathon. In fact, on the way to race morning in the cab, I saw my very first live hooker! I was so excited that Jenni thought I was going to jump out and ask for her autograph.

In addition to all of this, Jenni is also in a picture that remains one of my favorite of myself of all time. As I am not the most photogenic chap out there, that is saying something! 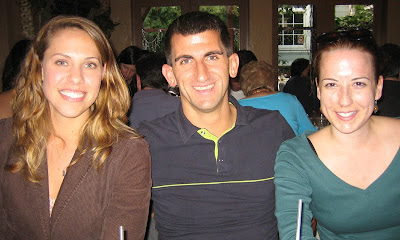 Jenni on the left and me on in the middle. Duh.


Last year, on my ill-fated attempt to break my own personal record of 84 miles in 12 hours at the San Francisco One Day 12 Hour Race would have been much worse of a result for me given the searing temperatures of the day if Jenni had not come down mid-race to provide me with some of my favorite energy drink. 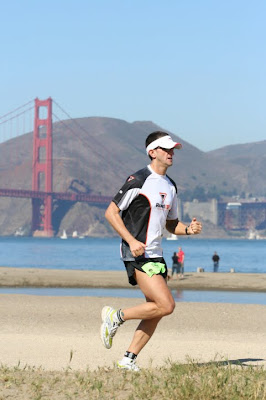 Jenni has, meanwhile, continued to lower her marathon times while also taking on cycling and triathlons as well. Unfortunately, her training took a serious downturn a few weeks ago when, while riding home on her bicycle, a bag she was carrying got caught in the spokes of her bike. Down she went. HARD. She went from this: 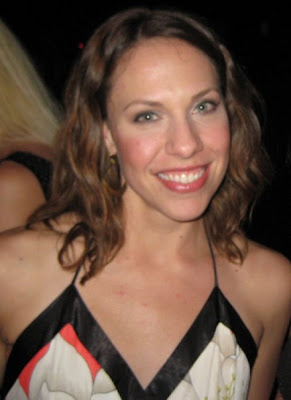 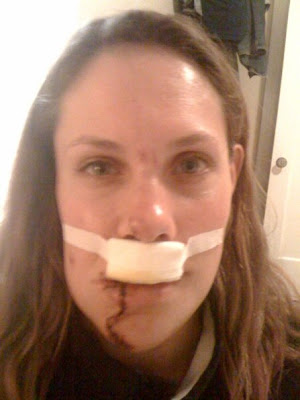 In her own words.:

"They took me in for a CT scan to make sure my neck and jaw were okay (they were pretty sure I had a broken jaw), but it miraculously showed that I had no broken bones. It turns out I hit pretty much straight on - my helmet is smashed directly in the middle, my sunglasses broke right in the middle (but the lenses aren't even scratched), my mouth split just to the right-hand side, and the road rash on my chest and shoulders is just slightly worse on the right side. I can't imagine what would have happened if I hadn't been wearing cycling gloves - I'm sure my hands would have been a mess!

Luckily, Oron (her boyfriend) was there to speak for me - they wanted to have a first-year resident stitch my face, and he told them "NO WAY!" After a couple of hours of arguing, we finally got the 5th year resident to come in, and the first-year assisted. Thank God, because it took them 2 hours to stitch me up! I can't imagine if she'd been there all by herself."

The story would end there if this was just a "Be Careful, Kids"! PSA now that I am more attuned to cycling accidents. However, Jenni had a race to run.

"I went in to have the stitches taken out of my chin on Friday, and I asked the doctor if I could run on Sunday (I had run 5 miles once during the week just to test things out). He didn't really like the idea, but told me that I could do it if I wore a lot of sunscreen and covered my cuts. Oron spent a lot of time trying to convince me not to run (you have to give him credit for caring about how my face is going to turn out in the end!), but of course I wasn't going to give in."

Not only does Jenni go out and run this half-marathon but she does so in style. While everyone else is looking moribund and exhausted, Jenni is cruising along nearly a minute faster per mile than she expected. And still had time to smile for the camera. Well, sorta. 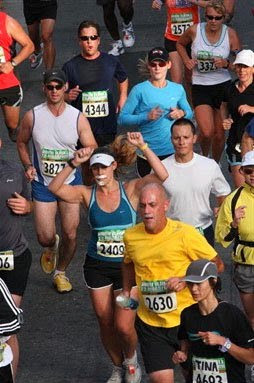 As the miles peel away, Jenni could only breather through her nose. Now you may have heard some people say that the key to running is to breather in through your nose and out through your mouth. this is hogwash. It may work for cleansing breaths in yoga but in running you need to simply get as much oxygen to your lungs as possible, and to do so as quickly as possible. Unless you have some SERIOUSLY big nostrils, those puppies are not the same size as your throat. THAT is how you should breathe. And Jenni couldn't do that. No matter.

"I never felt like my legs were that tired. I took my time at the water stops to avoid hurting myself with the cups, but I got a lot of great encouragement from the kids working there, calling me hardcore and giving me "you go girl!" I don't know when I finally realized that I could come close to my PR...must have been around mile 8 or 9."

Well, I am going to kill the ending here for you. Jenni did not set a new personal best. But by coming in just over 30 seconds off of her personal best, in a time of 1:47:16, she sure as heck showed an amazing amount of intestinal fortitude and spirit. She was originally only hoping to break two hours but almost ran the fastest she ever has for 13.1 miles!

Would I recommend that everyone do this? No. Was it foolish or potentially dangerous? Not really. Jenni had spoken (or perhaps mined) with her doctor and while he was cautious he told her to go ahead if she was extremely careful. She was. She also impressed the heck out of a lot of people and showed what sort of hard-nosed person she is.

Not many people have earned a finisher's medal as deservingly as Jenni did this past weekend. Kudos to you Jenni and heal up fast! 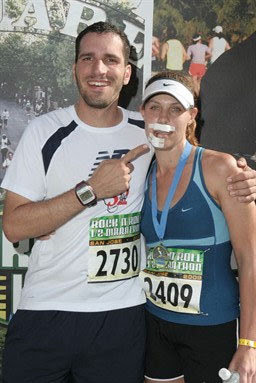 Jenni is awesome and an inspiration to us all! What a nice blog to honor her!

Wow, talk about overcoming adversity! It's amazing Jenni was able to pull out a personal best!

Let's be more accurate, The resident was at her 1st year, actual experience - July till the end of October = 3 months.

Thanks, Dane!!! This is too cool, and if my little experience can help anyone out, it's definitely worth it! :)