But, being inspired and actually enjoying a book are two separate things.  Not every great story has a great storyteller. Fortunately, while Rigsby's book has a few sections I could have done without, it was overall a very enjoyable read.
In the past few years of becoming a "runner", quickly surpassing 100 lifetime marathons, and immersing myself in all things running, I have read dozens and dozens of books on the subject.  Countless hours have been spent learning as much as I can about the history, present and future of running.  Couple all of that with many of my life experiences and I rarely look at something from just one angle.  Call it cynical, call it hyper-awareness or call it a product of a shirt-attention span, rarely is anything simple for me.  But beginning Scott's book I knew that all the elements were there to make a good story.  When more effects were sprinkled in (his rebellious nature, bouts with alcoholism, wasteful spending, etc) I was certain this was a prime example of someone who had not only been dealt a rough hand in life, but also heaped more on himself which, as I knew how it ended, created the great American story of succeeding against all odds. 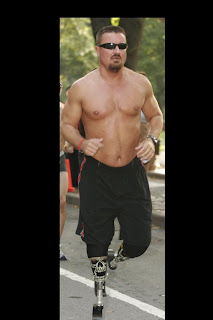 Do not get me wrong, I truly believe every high and low Scott writes about.  I do not, for one second, think anything was embellished.  However, there were elements here that I had read in so many other stories.  I was prepared to see the same formulaic falling down and rising again.  Scott's tale begins with a gripping recount of the fateful day which changed his life forever, only to to backslide a bit into how his faith helped get him on, well, his prosthetic feet again.  I am sure his faith is very important to him, but this was the one section I personally sort of glazed over during  But that's just me.  I am the guy who when someone says, "God helped me get through that car accident" responds "Yeah, well he sorta is the one who had the car hit you in the first place, too."

But as the focus of the book turned towards his goal of completing what many would call "Unthinkable", completing a full Ironman triathlon (for the uninitiated that is a 2.4 mile swim, 112 mile bike ride and THEN a marathon), the book finds its groove.  You are moved with Scott has his setbacks and successes alternate.  As an athlete who was chasing a dream myself, all while feeling a financial pinch always seemingly this close from ending that dream, the anxiety Scott was feeling woke the same feelings in me.  Finally, Scott crossed the finishline in Kona and redefined what possible means. 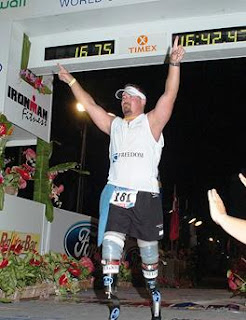 I have written before about how as a society we often cheer on those who have chosen a wrong career path knowing it was wrong and then turned their lives around.  We like to see people fall down and then get back up again.  sure, Scott illustrates some of the poor choices he made in his life but he never once chose to have an accident that would subsequently make him lose both legs.  Yet, although it took him some time, he finally set a huge goal and embraced  all that came with it.

Unthinkable?  Only to those who decide to listen to their limitations.  Scott decided not to.
Posted by Dane at 12:22 PM

Thanks Dane I followed him last year, he is amazing!!

Dane - Just as I finished my first (and what was supposed to be my only and last marathon in London this year), I read about Phil Packer - a UK soldier wounded in the Iraqi war. I was standing in line at immigration waiting to clear at Houston's airport in awe when I read his story. Thanks or sharing. I will check this out and your book. Keep runnning!